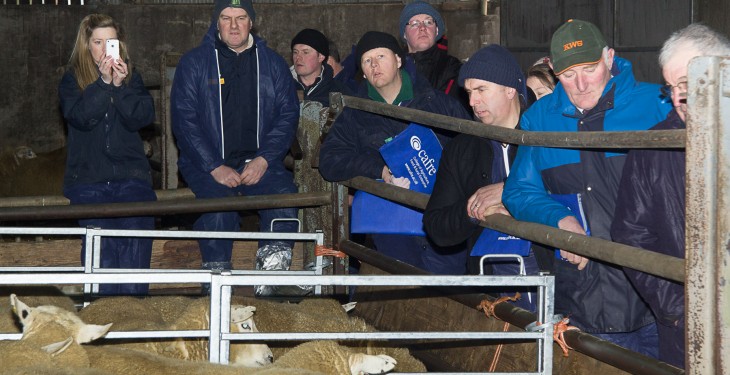 More than 1,000 producers came to look, learn and listen, question and query, when Ulster Grassland Society President John Martin hosted an AgriSearch sheep event organised with Agri-Food and Biosciences Institute (AFBI) and College of Agriculture, Food and Rural Enterprise. A farm where sheep are giving the same financial performance as a dairy herd!

The Martin family farm business at Greyabbey, Co Down comprises a 600-strong commercial flock, including 140 homebred ewe lambs, a suckler cow to beef system, winter barley for home use and 40 acres of short rotation coppiced willow.

The key objectives of John Martin’s sheep breeding policy are to have a labour-efficient, easier-care system and to breed durable ewes from within the flock with the capacity to increase numbers of lambs weaned per ewe and improve lambing ease.

The visitors particularly enjoyed viewing the composite ewes that are mostly due to lamb in March/April. Belclare and Highlanders are used as maternal sires whilst terminal sire breeds include Suffolk, Texel and Charollais.

Aurélie Aubry from AFBI, Hillsborough explained that poor ewe fertility and lambing difficulty were the main constraints on profitability of lowland production systems in Northern Ireland. Thus AFBI have been evaluating a three breed rotational replacement strategy on their co-researcher farms, including Martin’s, to introduce maternal traits, whilst still delivering high lamb output to market specifications.

The three breeds currently investigated are Highlander (for easy care), Texel (for carcass traits) and Lleyn or Belclare (for prolificacy).

The highest weaning rates in the lowland trial so far were achieved by the Highlander crosses, with little difference in lamb growth rates between the different breed types examined.  All breed types achieved good efficiencies of 0.82-0.90 (kg lamb weaned per kg ewe), with the Highlander cross ewes achieving high efficiencies of 0.90 due to their superior weaning rate and good lamb growth up to weaning (0.26 kg/d, similar to the growth rate of lambs from Texel cross ewes).

Work is ongoing to assess lifetime performance of these crossbred ewes with the aim of achieving a target of 1kg of lamb weaned per kg of ewe body weight.

The Hillsborough Management Recording Scheme for 2014 aims to identify ewes in commercial flocks suited to these easier-care systems and able to breed replacement sheep that will require less intervention at lambing.

Every farmer attending was given a lambing book to record lambing ease, mothering ability and lamb viability.  Lamb weights are then recorded at weaning and record books returned to AFBI, who produce a report ranking ewes in your flock on a scale of 0-100, thus providing a simple tool to help select the best replacement ewes.

One lambing book is needed to record lambing data from 50 ewes so extra books are available from Jennifer Meeke at AFBI Hillsborough Tel: 00 44 28 9268 1577, [email protected]

John Martin and the other co-researcher farmers present shared their experience of using this scheme and suggested other options for those not wishing to record data. A lively discussion covered a range of approaches from a simple ear notch option if you are not interested in tagging lambs at birth, to a more complex and comprehensive system relying on EID tags, which the Martin’s are currently using successfully for his flock.

Regardless of the approach you decide to use to identify the lambing history (lambing difficulty, whether single or multiple and so on) of your ewe lambs, it was agreed that this leads to better flock performance compared to selecting ewe lambs based on appearance post weaning.

AFBI scientists also presented some figures from a flock where the Hillsborough Management Recording Scheme had been implemented since 2007. The lambing ease improved from about 60 per cent of ewes lambing unaided in 2007-2008 to 80 per cent in 2013.

A new sheep lameness guide was also launched to help producers diagnose the cause of lameness in sheep, identify treatment options, know how to prevent the conditions and follow best practice for foot bathing and foot trimming.

Booklets are available free from AgriSearch email: [email protected] or from CAFRE Beef and Sheep Advisors.

Visiting farmers expressed particular interest in John Martin’s feeding regime based on grass silage and meal blend using barley produced at the farm. Several questions were asked about how he managed to produce such high quality silage with John noting that an early first cut was best though not always possible.

Ciaran Hamill, Business Technologist at CAFRE, reviewed physical and financial performance on benchmarked lowland farms. For example, John’s strategy over the past few years has been to reduce the mature live weight of ewes, which has enabled him to increase stocking rate, currently at 12 ewes per ha, and to produce about 400kg carcass per ha, whilst the average for the top 25 per cent benchmarked farms only stands at about 300kg carcass per ha.

Hamill noting that with the high output achieved per hectare on the Martin farm the sheep enterprise was returning comparable financial performance to that of a dairy farm.

For further details go to www.agrisearch.org.

Pictured farmers looking to learn at the AgriSearch event hosted by the Martins of Gordonall, Greyabbey