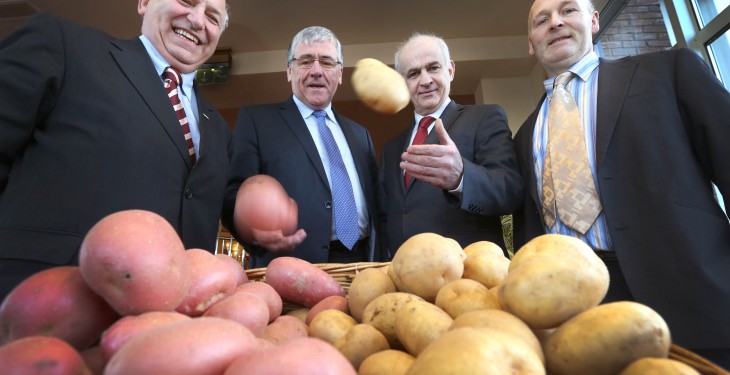 Speaking at the National Potato Conference, Tom Hayes, TD, Minister of State at the Department of Agriculture, Food and the Marine with special responsibility for Horticulture, today welcomed the investments made by the potato growers and packers over the years in order to remain competitive and develop market share.

These have included new equipment and technologies to improve quality of output, while minimising production costs and inputs. The minister particularly welcomed the fact that all stakeholders involved in the Irish potato industry have recently committed to preparing an application for EU co-funding to support a €1m potato promotion campaign over the next three years.

Referring to the current market situation, the minster said: “Potato growers have experienced difficulties marketing this year’s crop due to a combination of increased acreage, a good growing season and excellent harvesting conditions, coupled with changing market conditions and the diversity of choices now open to consumers.

“To stimulate demand, the industry needs to invest in a structured promotion campaign to drive increased consumption of potatoes in the long term.”

He continued by saying, “Promotion is now the way forward and the industry should invest in information and promotion measures to stimulate consumer demand for our national Irish crop.”

The minister outlined his support for a structured promotion campaign to reflect the versatility and health benefits of the potato under the EU Promotion Regime. Once approved, the European Commission will co-fund promotion programmes up to 50 per cent of eligible costs.

Meanwhile, speaking at the National Potato event Irish Farmers Association (IFA) president, Eddie Downey, warned that potato production is under threat in Ireland because of a falling share of the consumer price for growers and rising input costs.

“The current figures are simply unsustainable. Costs of production are running at more than €200 per tonne, while the producer is receiving much less than this. Potato growers’ incomes are unviable and the farm gate price of the product must rise as the price they receive from the market is the most important factor in determining their incomes.

“Today the growers’ share is just 26 per cent of the consumer price, which is down from 36 per cent four years ago. It needs to be addressed immediately, if retailers want the security of supply of Irish potatoes available to the Irish consumer.”

The IFA President stressed the future of an industry worth more than €80m at farmgate has to be secured.

“The Government has a responsibility to deliver retail regulation, which will restore equity to the food supply chain. Farmers are not getting the recognition or the reward for the investment involved in producing 370,000 tonnes of potatoes each year. Retailers will have to return a viable price to growers that cover their costs and gives them a margin. We have received numerous commitments from the Government on this issue; it is time for action.”

Downey said retailers had made a mockery of the work and value of fresh produce with their pre-Christmas campaign of using giveaway prices.

Retailers should realise that potatoes carry a value in the minds of consumers and this must be reflected in what growers are paid, he added.

In 2013 Ireland’s 540 commercial potato growers produced almost 10,000Ha of potatoes. The Department of Agriculture, Food and Marine estimates this resulted in a national yield of more than 360,000 tonnes.An increase in potato planting in 2013 combined with a reasonably good growing year and excellent harvesting conditions has lead to a surplus of potatoes on the Irish market.

The main potato variety grown in Ireland is Rooster accounting for 60 per cent of production in 2013.  This was followed by the varieties of Kerr’s Pink (10 per cent), Queens (7.5 per cent), Golden Wonder (three per cent), Records (one per cent) and “other varieties” (19.5 per cent).