The euphoria surrounding the €25m Sheep Welfare Scheme has been short-lived, according to the ICSA’s John Brooks, as sheepmeat prices were on the floor during the month of January.

“It is sad to say that within the 2016/2017 season the lowest prices that we [sheep farmers] received for lambs was during the month of January.

“The meat plants and the meat industry did us no favors in this crisis,” he said.

Speaking at a recent Gain Feeds Sheep Information evening, Brooks said sheepmeat factories exploited a small glut in the market for their own benefit.

“They penalised us [sheep farmers] for overweight lambs, they imported lamb from Scotland and the mainland UK and they imported carcass meat from across the water.

All of this lead to depressing the prices received by farmers even further. They had no morals and there was a very short-term view taken.

“For this industry to survive, all the stakeholders must be signing off the one hymn sheet and unfortunately the meat industry has really let us down in the last few weeks,” he said.

“In the two previous years in January, we were paid up to 24kg and we got on average 80c/kg more, which is €20/lamb more and is the full profit,” he said.

Brooks stressed that meat plants could have turned a negative into a positive by encouraging supermarkets and retailers to run promotions with the extra supplies of sheepmeat this January.

Are things beginning to turn?

Brooks also suggested that the market is beginning to turn back in the farmers favor as supplies are beginning to tighten, adding that 4.90c/kg is widely for hoggets this week.

“For the medium term, we in ICSA don’t see any reason why prices shouldn’t be the same as any other year,” he said.

When we take this into account and the high kills we have had over the last few weeks, the law of averages suggests that demand should outstrip supply very soon.

The ICSA representative also touched on the alternative markets for Irish lamb and encouraged the meat sector to do more to access these markets.

“Germany is becoming a very important player, currently their lamb prices are 19% ahead of ours, France is 26%, Cyprus is 34% and Austria is 36% ahead,” he said. 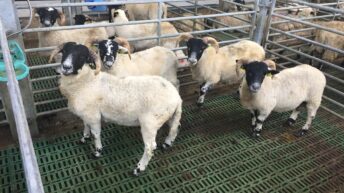 4 key factors having an impact on the sheepmeat trade