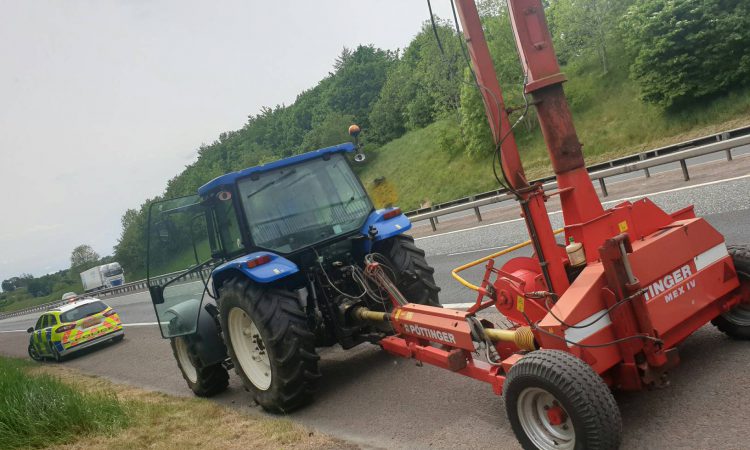 A tractor driver was pulled in by police officers when travelling on the M1 motorway last week, resulting in a penalty for the operator.

The driver was pulled over last Thursday, May 21, at Dungannon, Co. Tyrone by local members of the Police Service of Northern Ireland (PSNI) on Northern Ireland’s westbound M1, which runs from Belfast to Dungannon.

“Police stopped this agricultural tractor and machinery on the M1 at Dungannon heading westbound. Agricultural vehicles are not permitted on motorways.

The driver was spoken to, and the matter was dealt with by way of fixed penalty ticket.

The PSNI explained that this consisted of three penalty points and a £65 (€72.69) fine.

Driving On A Motorway

In the UK, including Northern Ireland, it is illegal to drive a tractor (classed as an agricultural vehicle) on a motorway; however, that is not the case in the Republic of Ireland.

If you are driving your tractor on the motorway and towing a trailer, the trailer must be capable by design of being drawn at a speed of 50kph or higher, the Road Safety Authority (RSA) has confirmed.

Tractors can be driven on the motorway in the Republic of Ireland, providing that the tractor is capable of reaching a minimum speed of 50kph.

Since January 1, 2016, both tractors and trailers are required to be fitted with a speed disc indicating their design speed.