The number of planning permissions granted for new buildings in the agriculture sector in the third quarter (Q3) of 2016 has fallen for the first time in 15 months, figures from the Central Statistics Office (CSO) show.

A total of 494 planning permissions for new builds in the sector were granted in Q3, down slightly from the 510 granted in the second quarter.

While the number is down on the last quarter, the figure remains 64% ahead of the number of planning permissions granted in the third quarter of 2015, when 301 permissions were granted.

The south west region of the country had the highest number of planning permissions granted with 107 permissions approved, followed by the border region with 95.

Dublin and the mid west had the lowest number of approvals in the third quarter, with four and 30 permissions given the green light, respectively. 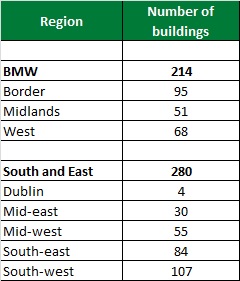 Meanwhile, there was a total of 69 planning permissions granted for extensions to agricultural buildings in the third quarter.

A breakdown of these figures found that 25 permissions were granted in the BMW region while 44 received planning permissions in the southern and eastern region.

The increase in the number of agriculture buildings over the last 15 months can be attributed to the Targeted Agricultural Modernisation Scheme (TAMS II).

The most up-to-date figures from the Department of Agriculture show that over 9,000 farmers have applied to the scheme.

Of this number, the Department of Agriculture has approved 4,832 TAMS II applications. As of November 28, the total number of payment claims lodged to date is 472.

The total number of payment claims that have been approved for payment to date is 135. Tranche five of the scheme remains open until January 13, 2017.