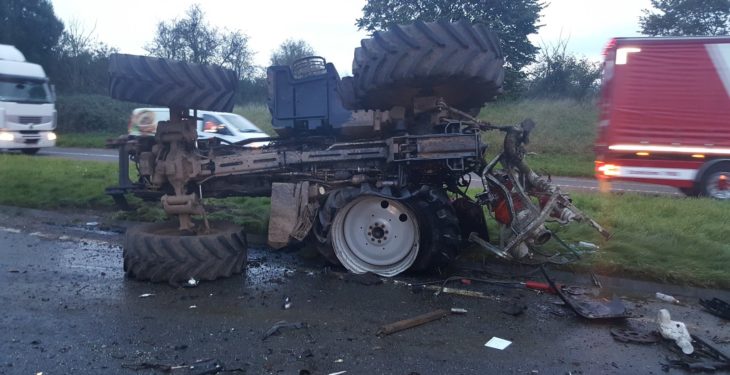 A bizarre dual carriageway smash up saw a tractor, combine and van caught up in a three-vehicle crash on one of Derbyshire’s busiest roads.

The incident happened just after 5:00am on Wednesday morning (October 4) and saw both lanes of the A50 closed between Sudbury and Derby, England.

While it’s understood no one was seriously injured in the crash, those at the scene say part of the road is likely remain closed while the debris is cleared and surface damage repaired.

Shocking pictures from the crash posted online by Derbyshire Constabulary showed the tractor on its side with its rear axle appearing to have been twisted in the crash. The cab of the van also appeared to have been badly crushed.

At one point the tailbacks stretched five miles from the scene. Both lanes were closed for more than six hours. However, one lane has since been reopened.

A Derbyshire Constabulary spokesman said: “The A50 is closed eastbound just prior to Junction Seven at Sudbury while Derbyshire Police and Highways deal with an RTC [Road Traffic Collision]. No action was needed by firefighters from Kingsway, who attended.”

No arrests have been made. Police are investigating the cause of the incident and are appealing for witnesses to contact them on 101 quoting the reference “96 October 4″.

It comes less than a month after a 10-car crash happened on the same road.

Nine people were treated by paramedics after the incident which happened on September 7 near Shardlow, although none of the injuries were not believed to be serious.