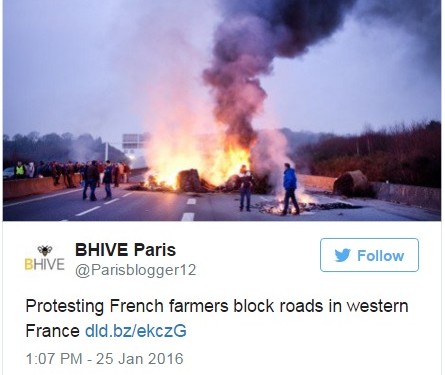 French farmers have taken to the streets of France to protest against the low prices they are receiving for their produce.

It comes after farmers hosted several other protests in 2015.

A roadblock of tractors was set up on the RN12 motorway between Rennes and Brest in the northwest of the country last week.

The farmers also lit tyres in protest and are demanding more financial help.

French farmer union the FDSEA organised the protest which saw around 100 farmers out in protest.

In 2015, the French minister for agriculture, Stephane Le Foll said that 23,000 French farmers face bankruptcy and his government then introduced a €600m aid package.

According to reports from The Local protests are also happening in parts of France again today (January 25).

Photos of the protest soon began to surface on Twitter:

Jean-Sebastien Evrard, a photographer with AFP Press, tweeted these photos of the protest, after the farmers had set the bales on fire.

This video from Russia Today also made an appearance on Twitter. It shows police officers with shields moving around the protest site.

The farmers have taken to western France today (January 25) and have blocked roads there and set more tyres on fire.

This AFP photo was tweeted off the BHIVE Paris account earlier today.