The Irish Hereford Breed Society (IHBS) held the first of its autumn shows last weekend in Tullamore and exhibitors were not deterred by stormy conditions from attending on the day.

Competition was tough with many strong bulls present at the event. The interest in the Hereford breed has continued to go from strength-to-strength each year, according to the society.

The breeders’ society added that this year saw the Hereford breed establish itself as one of the main breeds at many of the summer shows throughout the country – with many animals who had won various rosettes and sashes throughout the year present at Tullamore.

A large crowd was in attendance on the day for the event in Tullamore GVM Auctioneers, with a number of new and potential members hoping to make a purchase and get their Hereford herd up and running, the IHBS explained.

Michael Molloy’s Phoenix bull, from the Moyclare herd, took flight upon entering the ring and quickly caught the attention of a number of potential buyers. The price ran up to over €5,000, which saw the bidding battle drop to two hopeful buyers. It was Michael Hoey who came out victorious when his last bid of €6,600 proved enough to secure the 16-month-old bull. 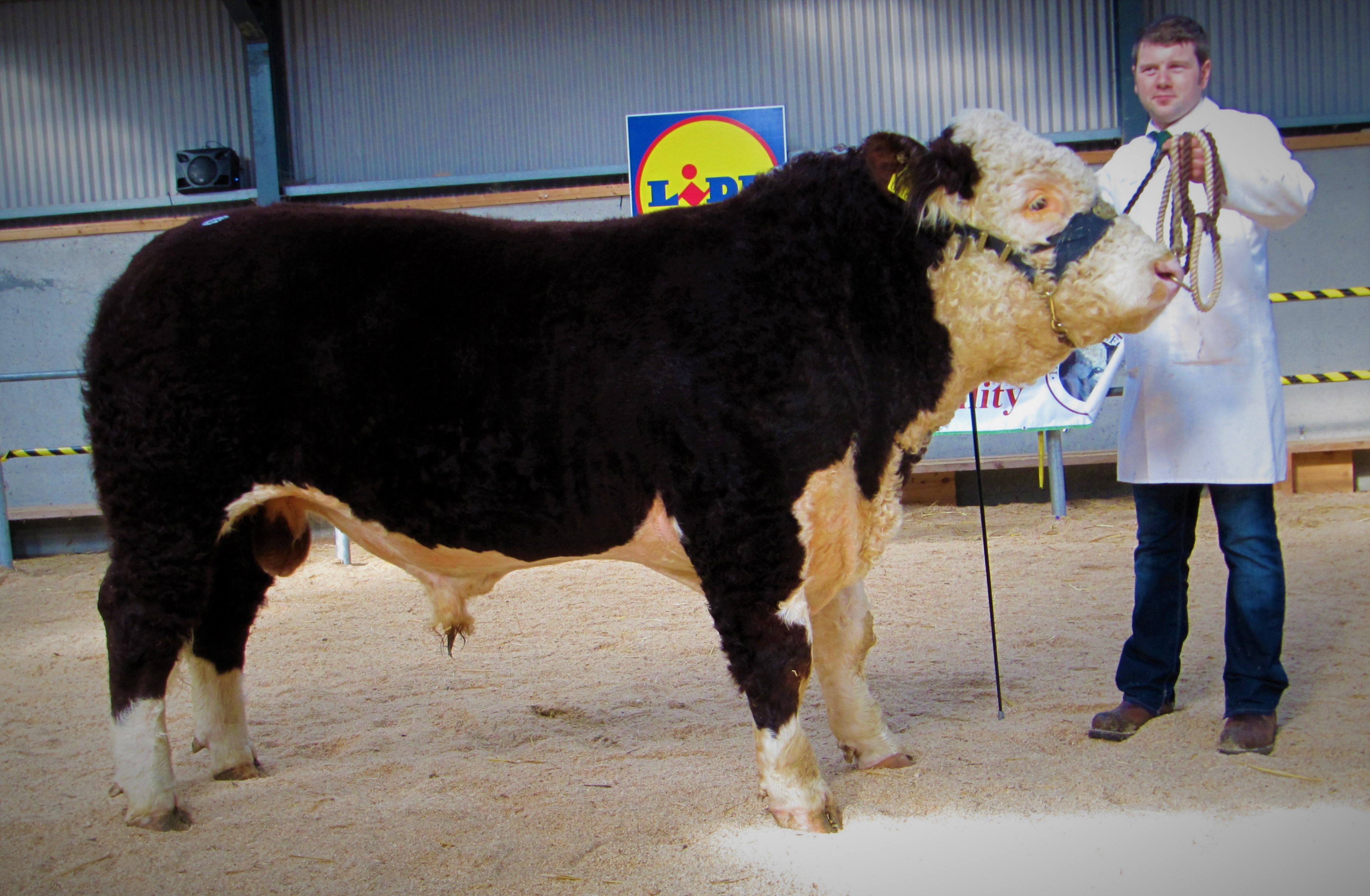 The Reserve Bull Champion on the day was Tom and Anselm Fitzgerald’s Grianan Ranger, an animal which was born last August and sired by Grainan Freddy. This bull sold for €4,000, with John Ryan from Co. Tipperary becoming the new owner. 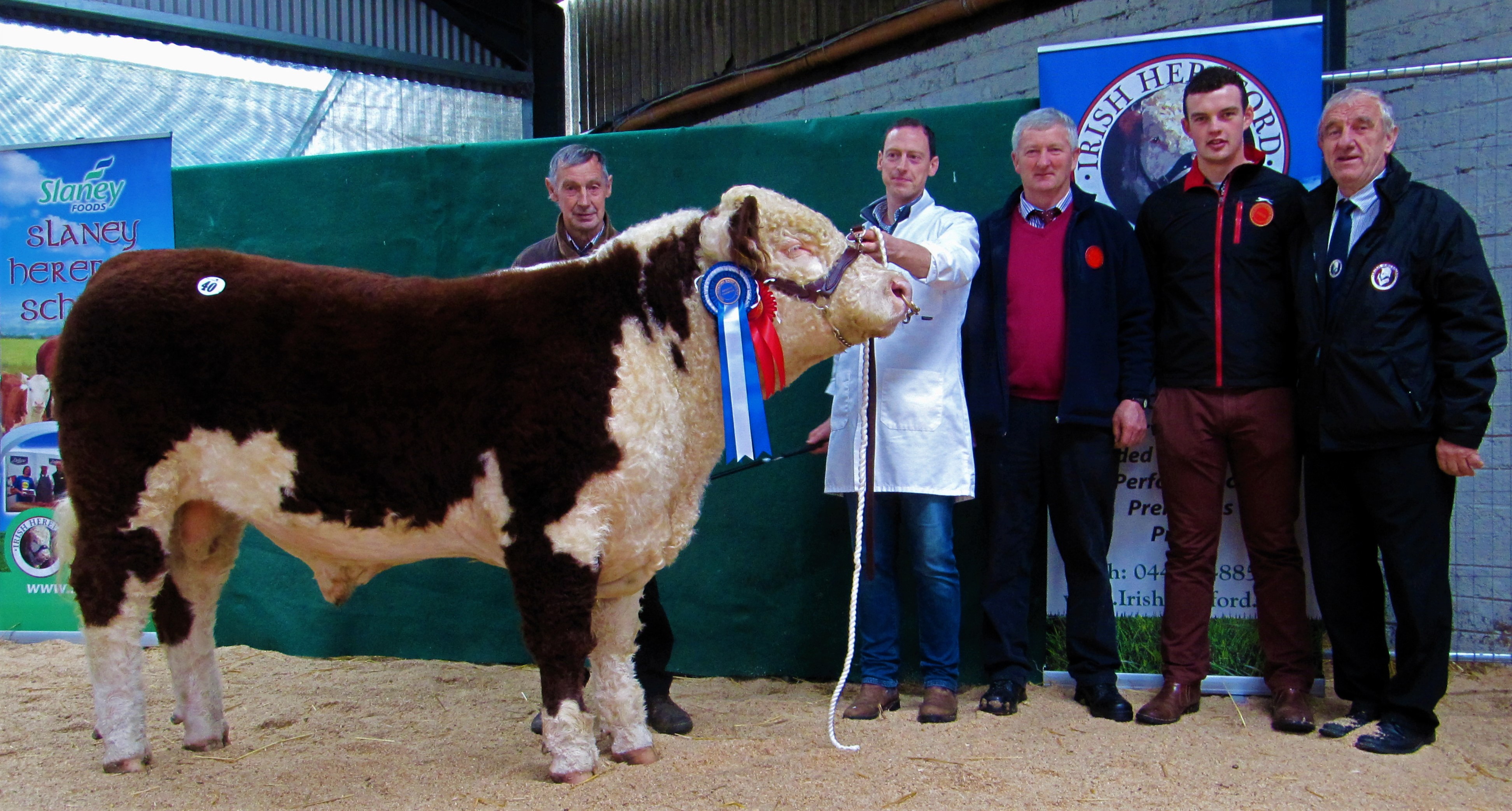 Shane Kilrane’s bull, Drumboy Jamie, was crowned Champion bull at the event. The bull was on exhibition at the Irish Hereford Society’s stand at the National Ploughing Championship earlier this year.

Tom Roycroft, having first seen the animal at the ‘Ploughing’, became the new owner when he placed his last bid at €3,650. 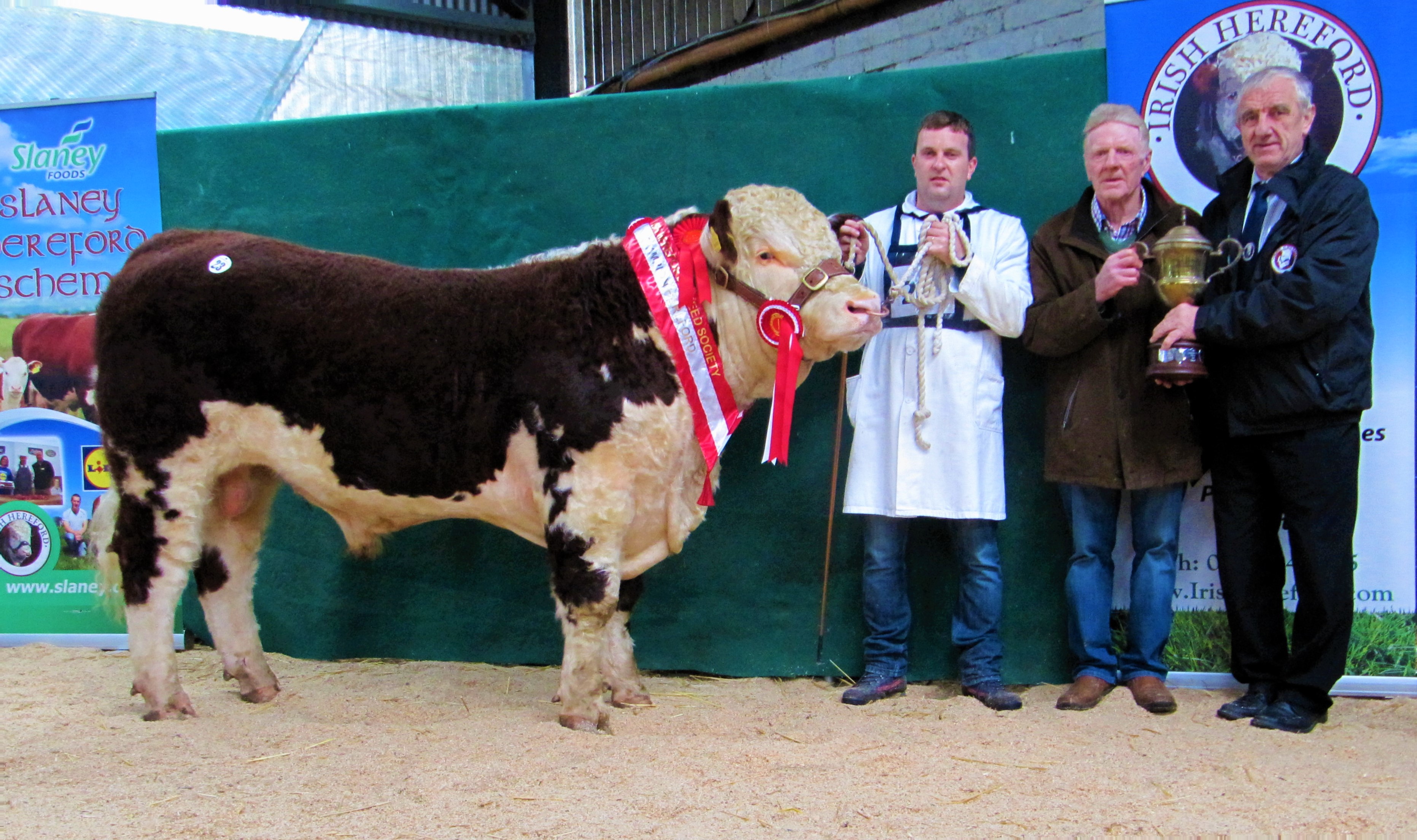 Shane and Sean Kilrane with their Champion bull, Drumboy Jamie, that sold for €3,650 in Tullamore. IHBS president Pat McCarthy presenting them with the Bank of Ireland Cup

K and M Diffley from Co. Leitrim sold their animal – Duibhgiolla Grian, a 16-month-old bull sired by Gageboro Morgan – for €3,800, with Gerard and James Scrahan from Co. Waterford becoming the new owners. 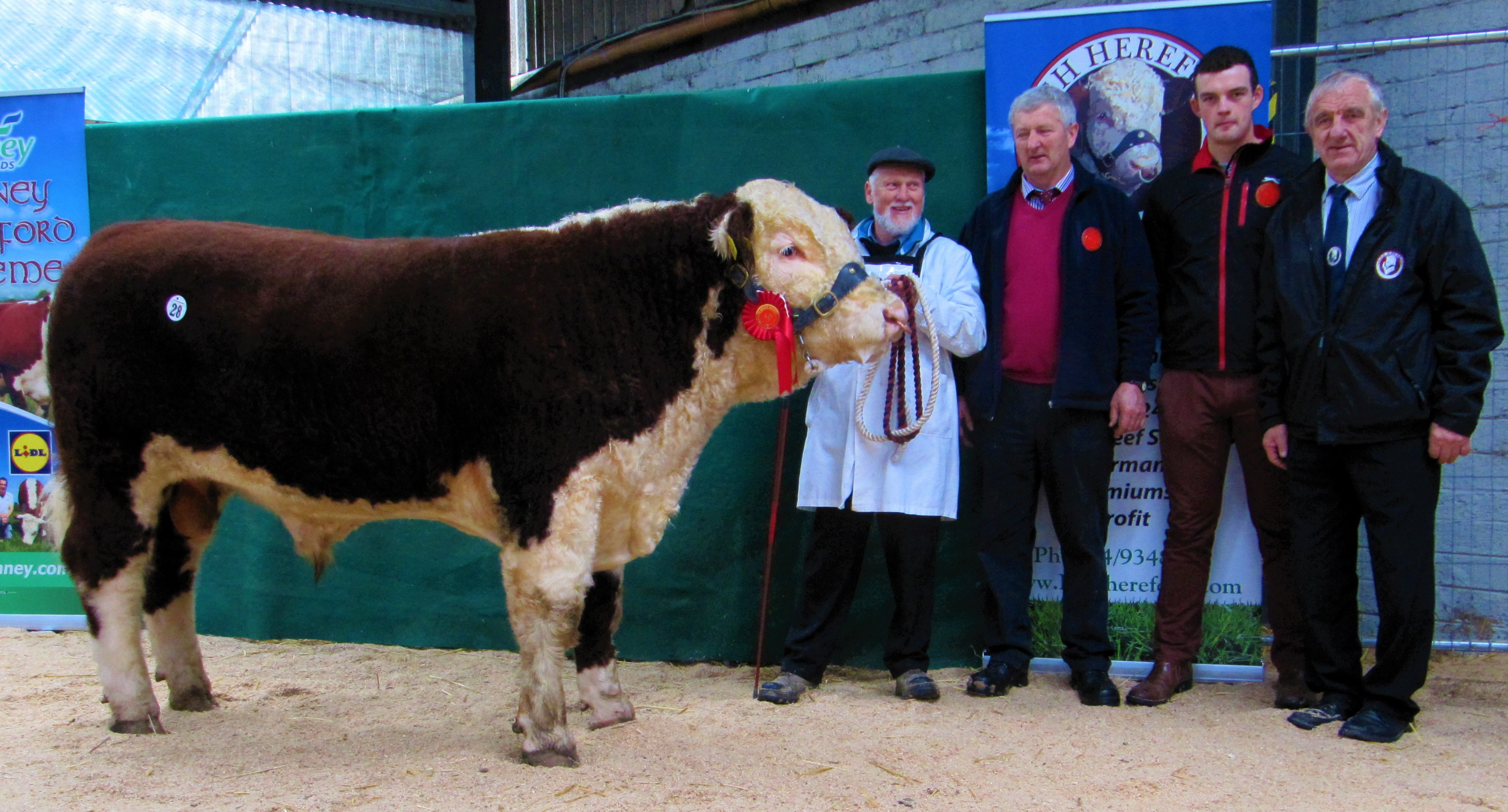 Kevin Diffley with Duibhgiolla Grian, the winner of the third class, that sold for €3,800. Also present were Gene and Owen Lynch (judges), as well as IHBS president Pat McCarthy

The bull has scores of four and five stars for both the terminal and replacement indexes, along with a calving difficulty of 2.2%. 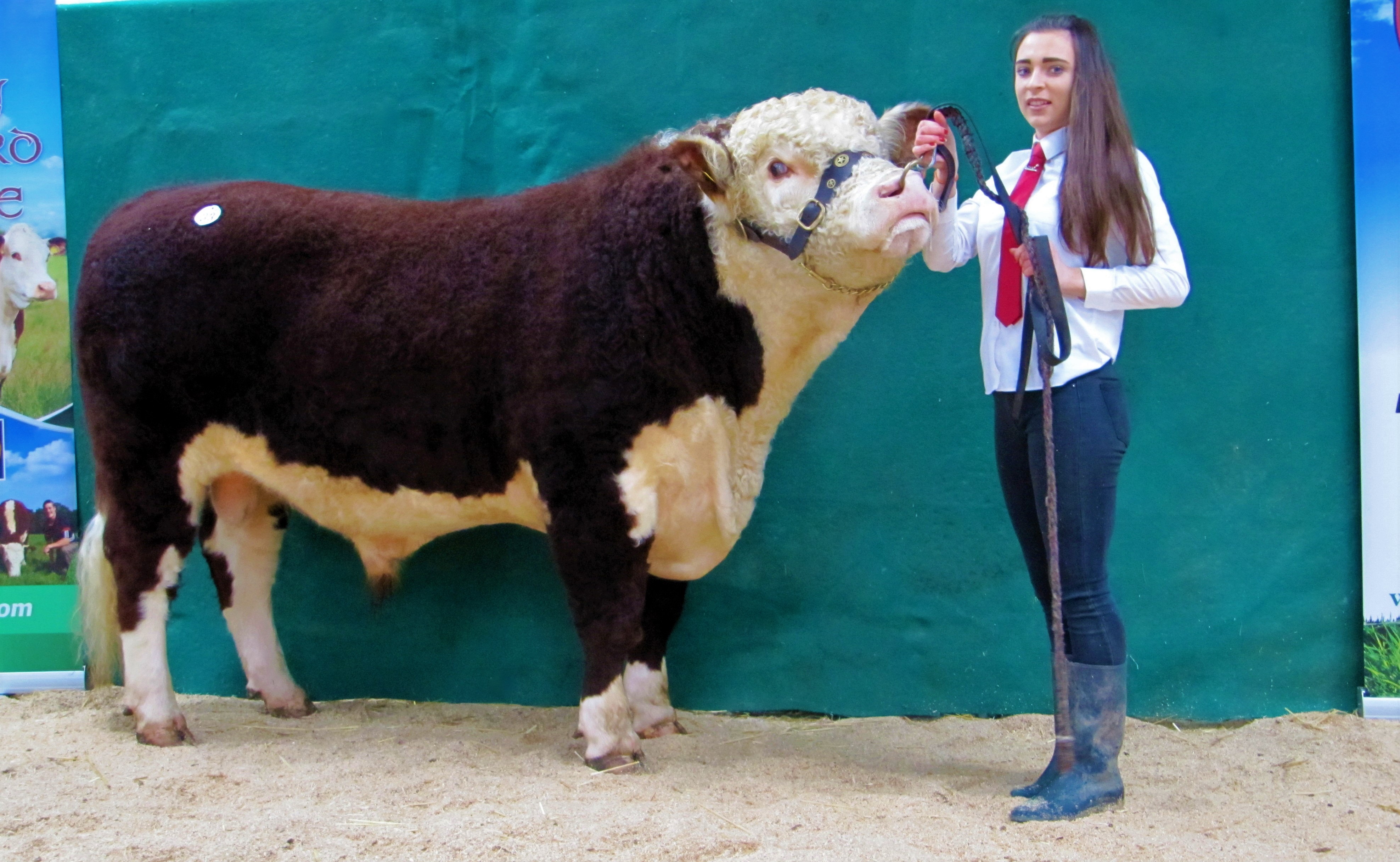 Sinead Conry showing her bull, Rathnollag Lucky 790, which was sold for €3,200

Trevor Dudley’s heifer, Kilsunny Lass Nadia, won Reserve Champion in the female classes and went on to sell for €3,400. The heifer was bought by Philip Lynch from Co. Cavan. 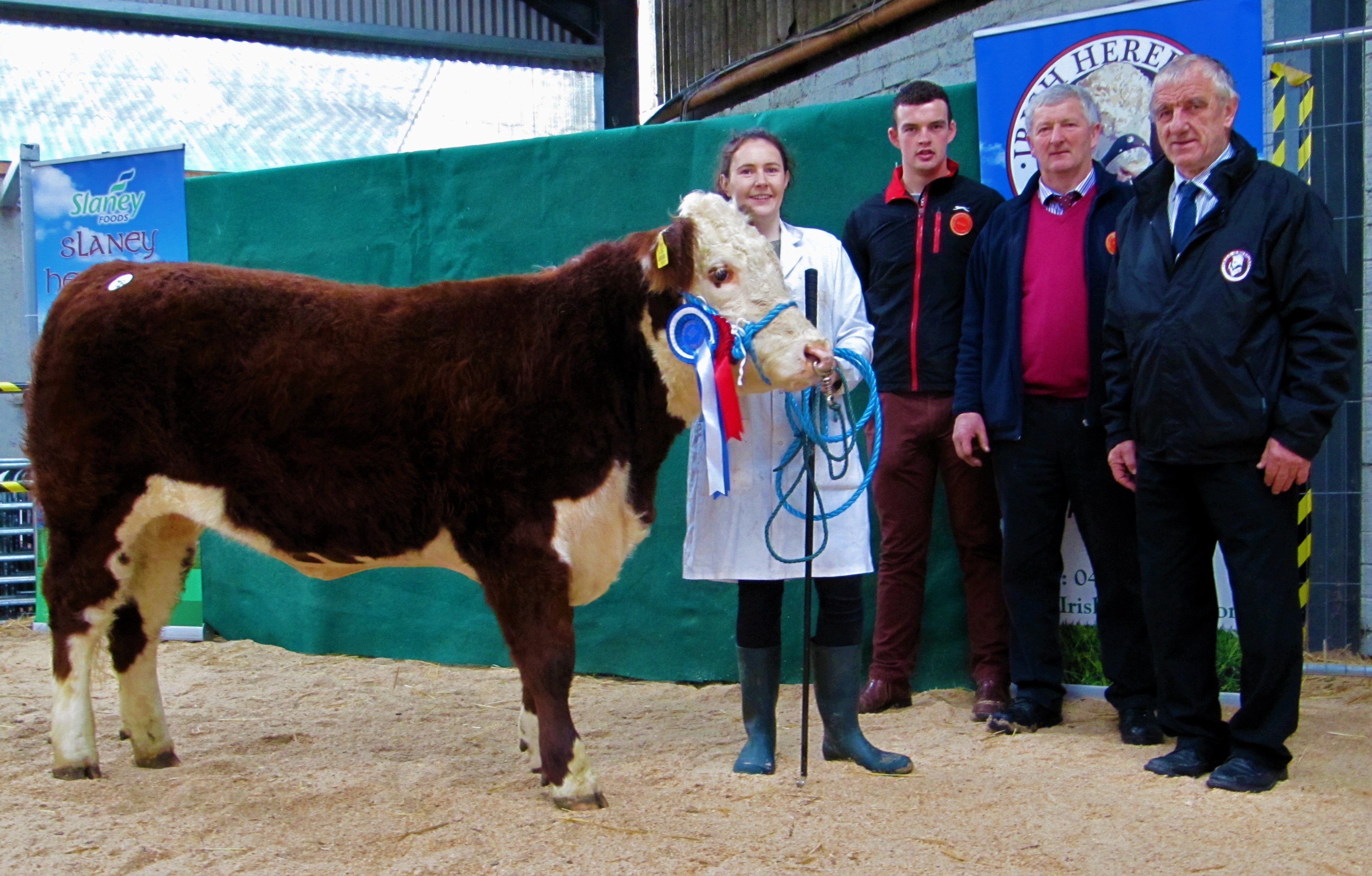 Champion of the female classes went to Padraig McGrath’s Kye Sunshine 722 – who is in calf to his stock five-star bull, Knoxlustre Twilight; a bull with a calving difficulty of 3.5%.

Kye Sunshine will remain in the west of Ireland with her new owner Cathal Dolan from Carrigallen, Co. Leitrim, who paid €2,900 for her. 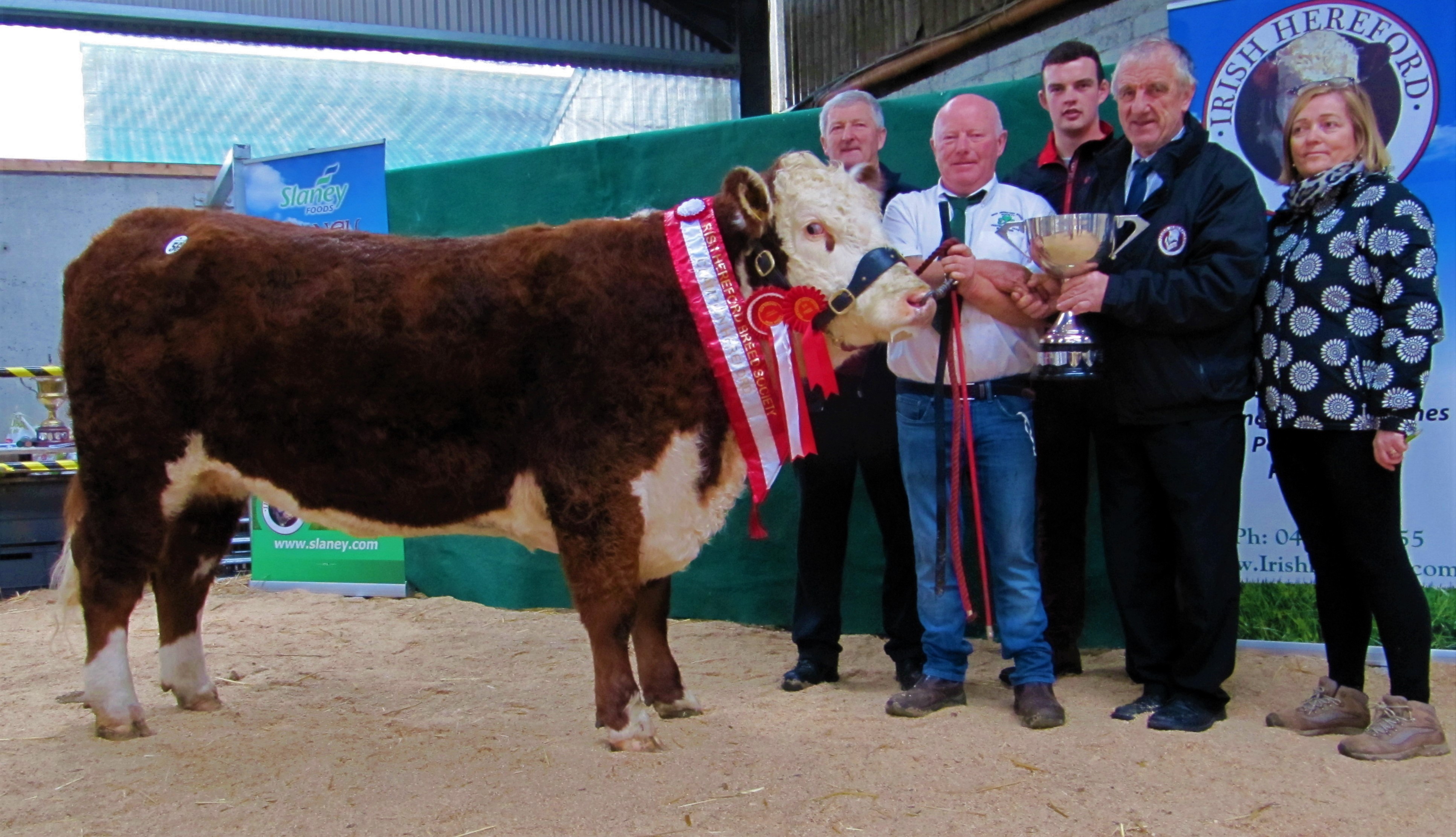 John Appelbe’s 14-month-old heifer, Appel 1 Joy, which was sired by this year’s Hereford National Champion Solpoll 1 Lawmann, was sold for €4,600 – the second highest price at the event. 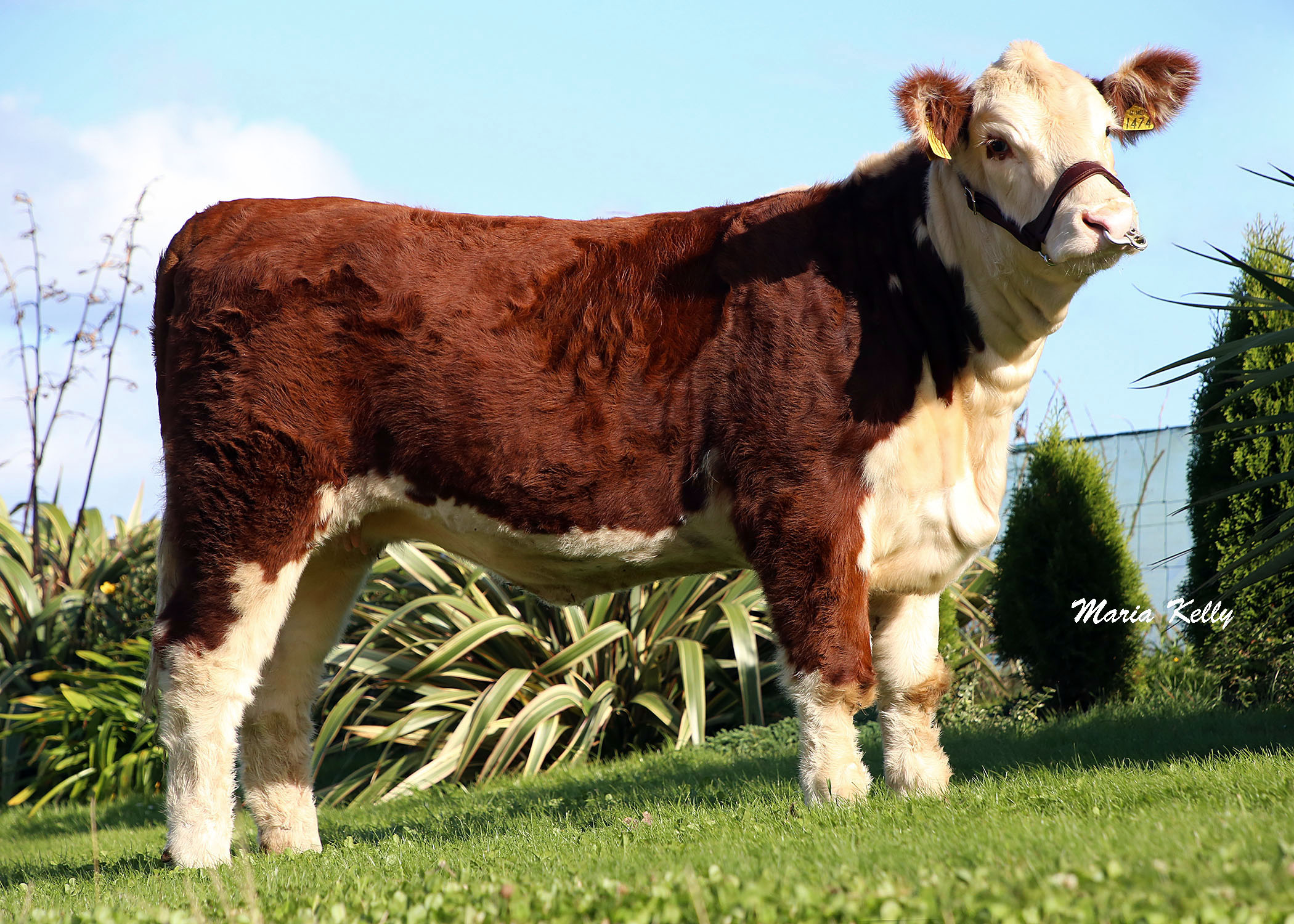 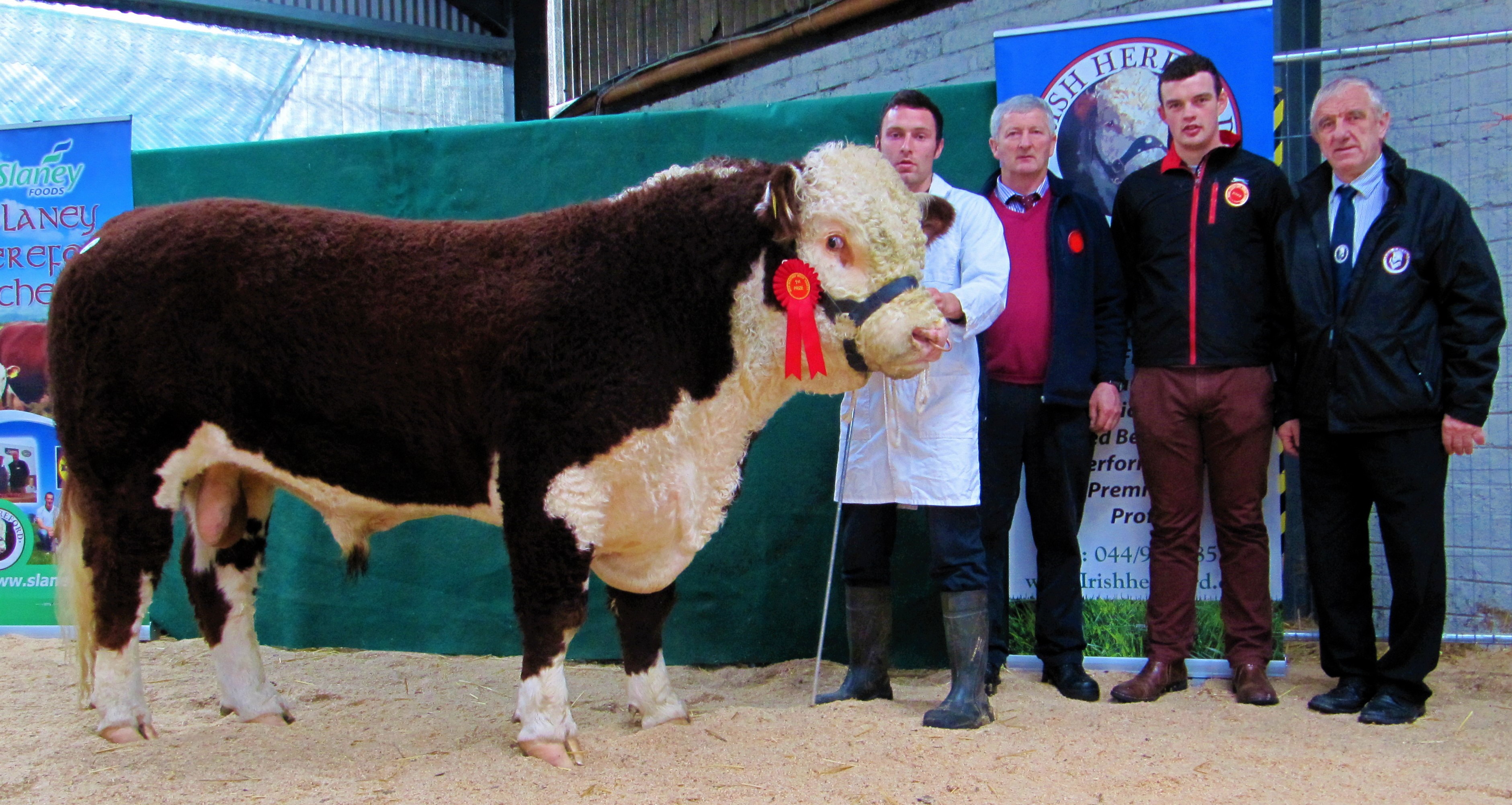 Richard Lalor with his bull, Rathkenty Okavango, that won the first bull class and went on to sell for €2,500. Gene and Owen Lynch (judges); and IHBS president Pat McCarthy 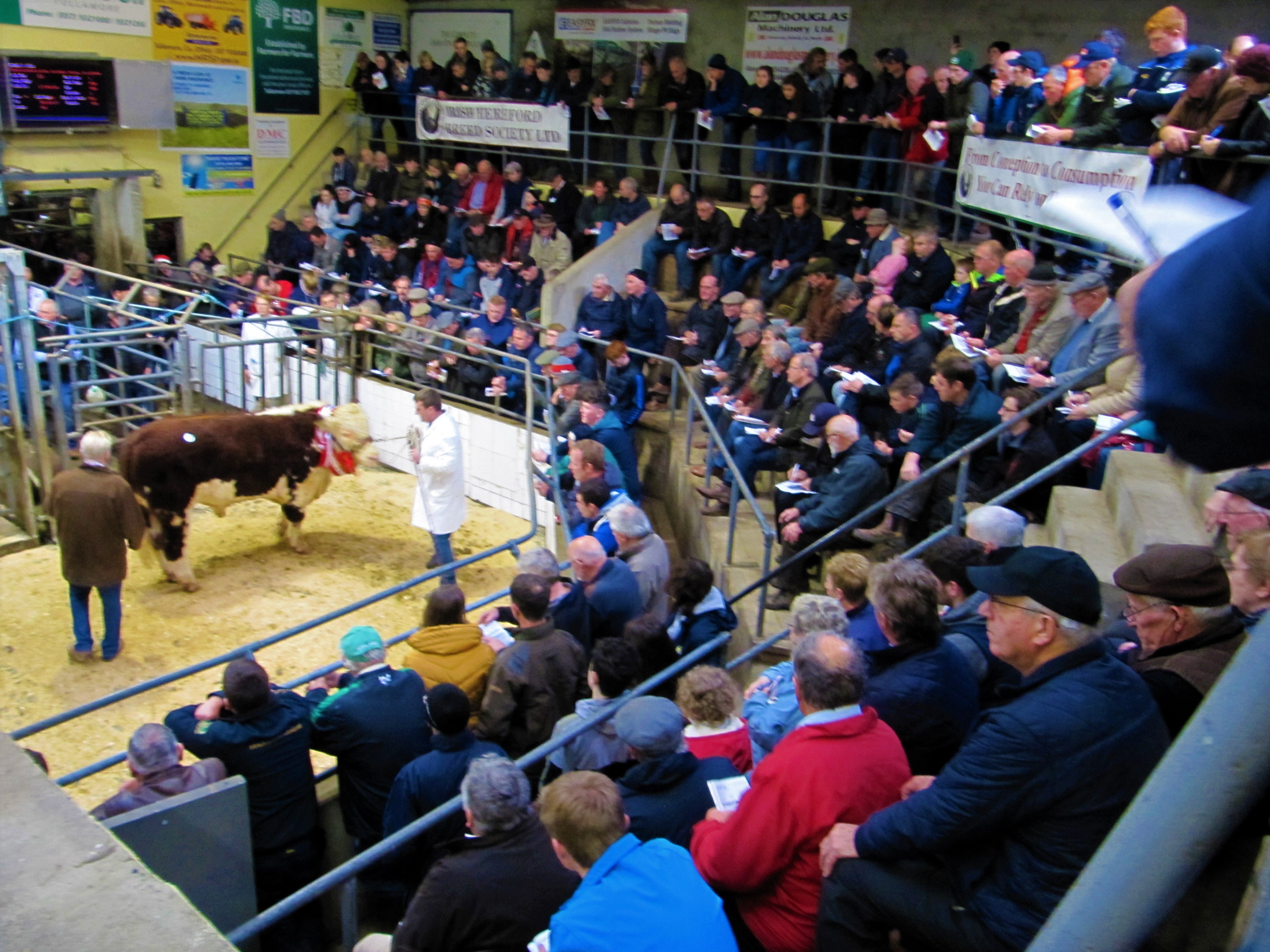 Good crowds at the event: “You wouldn’t get turning a sweet in your mouth” – Quote of the day from auctioneer Hugh Mulvihill

The IHBS announced that its next autumn show and sale will be held in Kilmallock, Co. Limerick, this Friday, October 27.

Over 31,000 genomic samples yet to be returned under the BDGP programme