The Irish Grain Growers Group (IGGG) staged a demonstration of facts outside of Boortmalt, Athy, Co. Kildare this morning.

Chairperson of the IGGG Bobby Miller spoke to AgriLand at this morning’s demonstration.

“We’re demonstrating the facts of the malting barley industry. We, the farmers, are going out of business – slowly but surely. €154/t doesn’t cut the mustard as an income for tillage farmers.

The distilling and brewing industries are the good news stories at the minute. It’s just not hitting the farmers’ pockets. 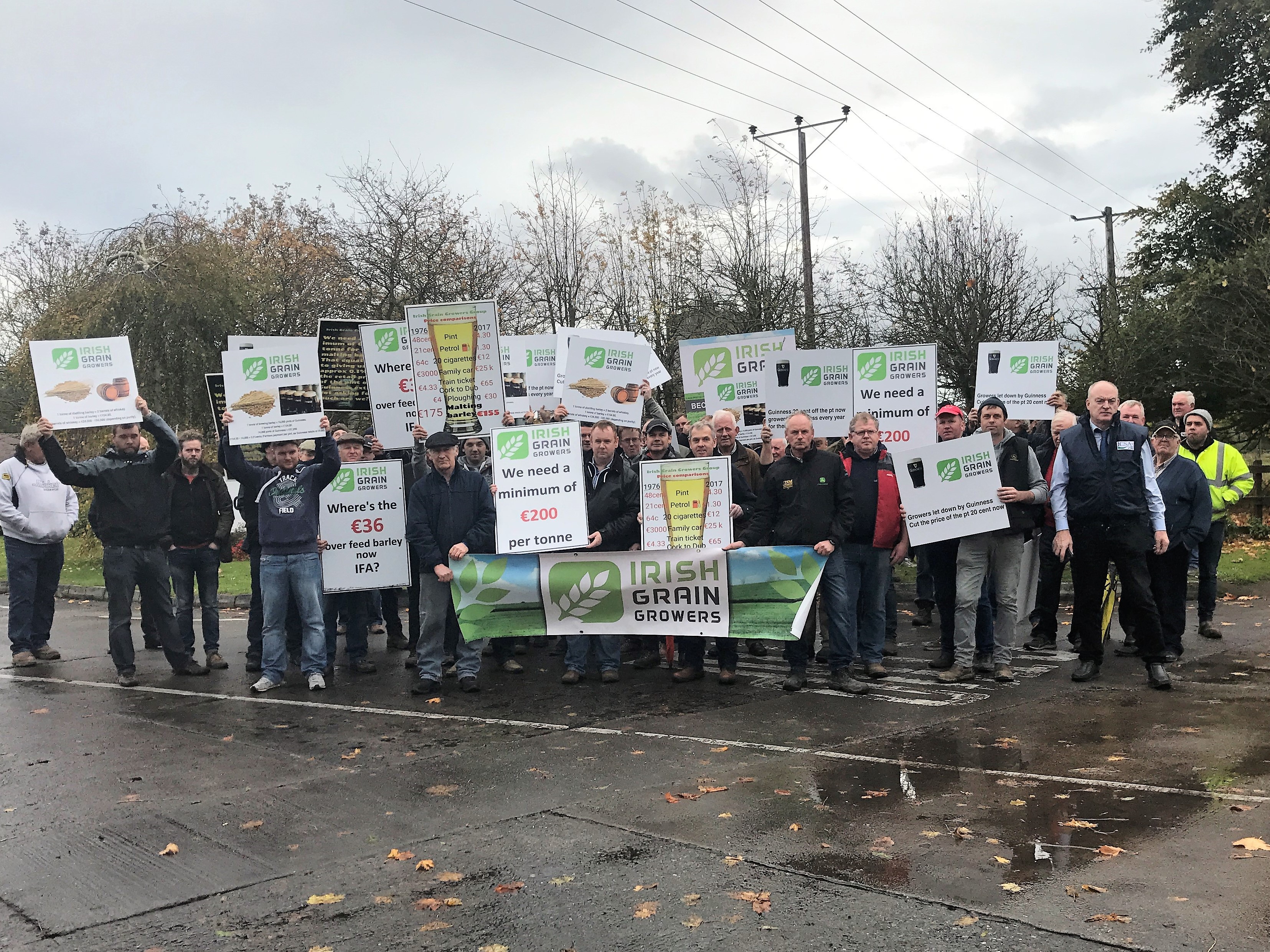 The IGGG has not staged any demonstrations outside of other malt buyers’ premises, such as Glanbia or Dairygold.

Miller stated that Glanbia is making an effort for its members on the malting price and that the group came to protest outside the company that sets the trend in prices.

“The reality is Glanbia paid €169/t to its members, plus the fact that its seed was at a normal price and it gives transport subsidies as well. This brings Glanbia above €170/t.

“Boortmalt, Minch Malt and Diageo are supposed to have a long-term relationship with growers, but it’s just not there. Glanbia did look after its shareholders to a degree. However, the figures still don’t add up.

Miller is unsure if he will continue to grow malting barley on his tillage farm.

“Some lads didn’t turn up here today. They’re not growing malting barley anymore. More lads are telling me that they are making up their minds as the year goes along. There’s a pride in growing the crop. That pride doesn’t pay the bills at the end of the day.

I’m a proud malting barley grower; my father has grown it; my grandfather grew it; generations have grown it. It’s hard to walk away from it, but pride doesn’t pay the bills.

“The reality is feed is paying better than malt. I have to make up my mind, like any other farmer, if it will pay to grow malting barley into the future.” 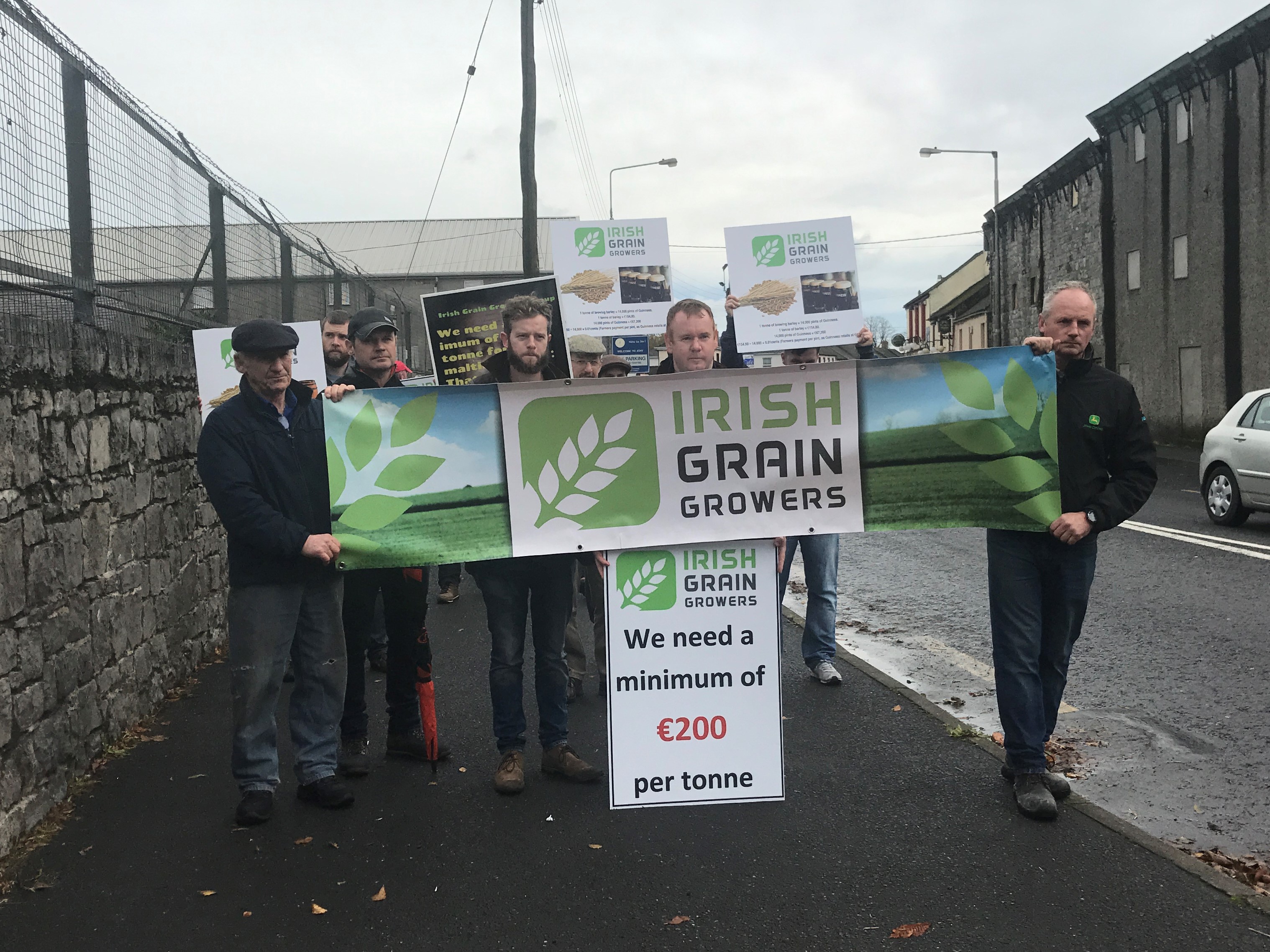 The gates of the Guinness Storehouse and Diageo are the next step in the IGGG’s plan, if no further progress is made.

“Things will have to move along. We’ll have to see what kind of response we get. We got a good response from growers. One sixth of malting barley contract growers turned up today and we got quite a few apologies. We can’t stop. It’s our livelihoods at the end of the day,” he explained.

Miller said that the group did not meet with Boortmalt this morning, but the company did release a statement to the media.

The statement from Boortmalt outlined how it has increased the sales of Irish malt by 40% since 2010 and it is purchasing more malting barley than ever before – from 600 growers.

“On pricing, Boortmalt and the IFA have put in place a unique pricing model for Irish malting barley that is open, transparent and market leading. Every single contracted grower has the same opportunity to hedge part of their contract tonnage each week, right through the entire year.

This model protects the grower from the unpredictable fluctuations of global grain markets, which can impact grain prices at harvest time.

“Since introducing the pricing model in 2012, we have seen a steady, year-on-year increase in take-up by growers of the model and, now, over 50% of the growers are currently benefiting from this pricing approach.