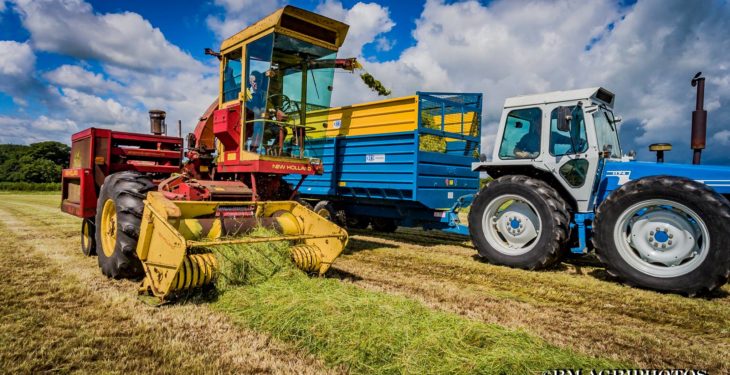 Last weekend played host to a major silage harvesting event – involving hoards of vintage and classic tractors and harvesters – as the Irish County Tractor Club held its second working day out in Ballinaskeagh, Banbridge, Co. Down.

Photographer Ray Mallon (RM Agriphotos) was there – capturing the sights throughout the day and framing some very eye-catching photographs along the way. In this article, we bring you just a selection of the many pictures taken by Ray on the day.

According to the Irish County Tractor Club Chairman, Francie McBride, a great day was had and all went well. The silage was cut on the farm of Mark Stewart, a member of the club.

There were 24 tractors in action on the day – double the number that attended the first day in Cork – with a social evening held afterwards.

There was a good mix of people at the event, according to McBride, with people up from counties Cork and Tipperary for the event as well, as a wide selection of other counties around the country. A couple of new members were in attendance as well.

The Irish County Tractor Club is planning to hold another working day – this time a ploughing day – later in the year.

In the meantime, according to McBride, some of the County club members will be in attendance at next week’s Working Vintage Festival in Rosemount Estate, Greyabbey, Co. Down, which will host a tractor road run on Friday evening (August 11), and the main event on Saturday (August 12).

McBride added that four County 1884 models – the only ones in Ireland – will all be present at the event.

The Irish County Tractor Club was founded last February, and has a tally of more than 40 members at present from around the country.

The club is always open to new members, with people who own or are interested in County tractors welcome to get in touch. The club can be contacted through its Facebook page.