The highlight of last week for those with a keen interest in agricultural equipment was the FTMTA Farm Machinery Show, which drew to a close on Saturday. Video highlights from the event featured in our on-site report.

Here, we review a selection of just some of the noteworthy tractors at the exhibition.

A quarter of a million Varios from Fendt

One of the most prominent locations at the show was inhabited by a 360hp Fendt 936. Proudly blazoned across a sign accompanying the tractor was the announcement that Fendt has produced 250,000 Vario transmissions – the firm’s innovative stepless hybrid hydro-mechanical unit. 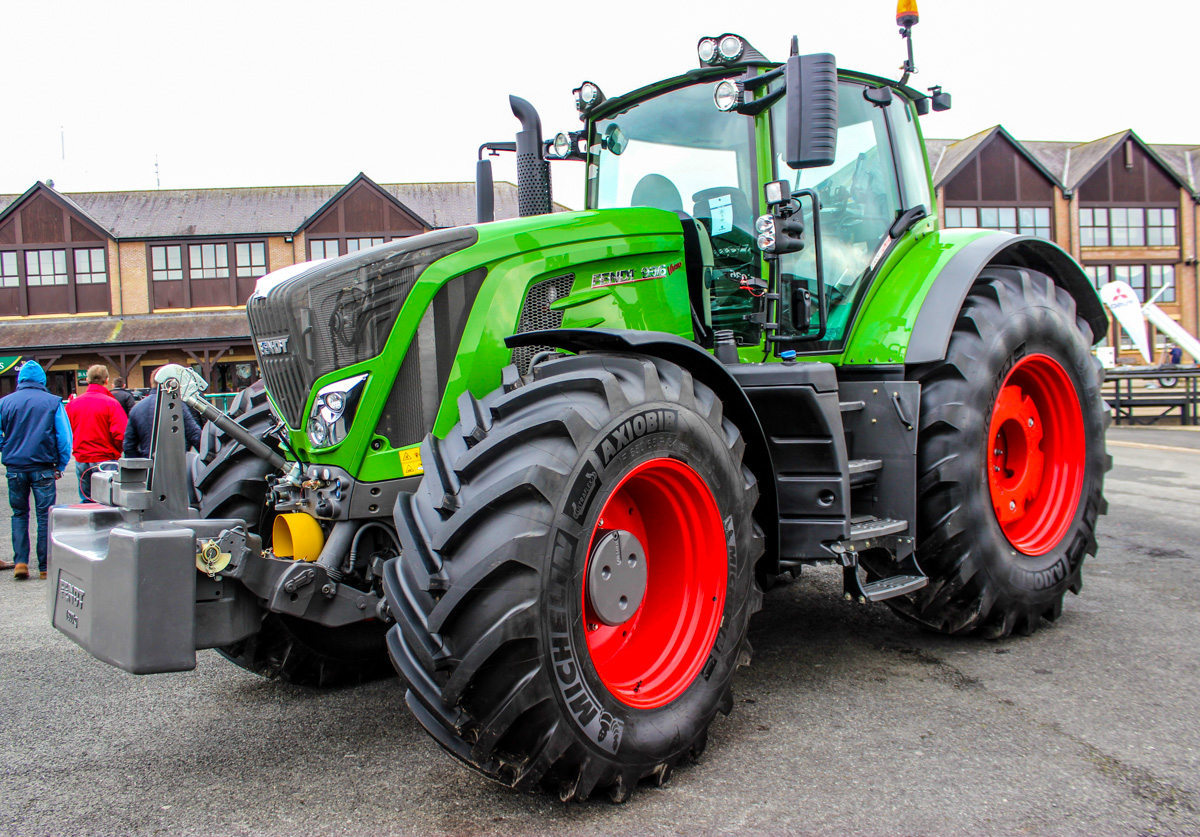 Fendt first began using the Vario transmission 20 years ago, when the manufacturer began producing the 260hp Fendt 926 Vario in 1996.

Inside the main pavilion Fendt showed a variety of other tractors, including a latest-generation Fendt 313 Vario with a Fendt Cargo 4X 75 front loader. As seen at the show, in ‘Profi’ specification with front axle and cab suspension, the 313 Vario (including the loader) sells for approximately €105,000 excluding VAT.

Feisty Fastrac is a ‘smooth’ operator

JCB had some heavy-hitters lurking in its outdoor exhibition area, including a 4000 Series Fastrac (parked alongside an imposing 427 Agri loading shovel).

Nestled neatly into a corner stand at the show was the 160hp, 6-cylinder Crystal model from Zetor – currently the flagship of the range.

Despite being a relative newcomer to the Irish market, a number of these are already out working on farms – both in the Republic of Ireland and Northern Ireland. The first unit was sold to a farmer in Co. Armagh. 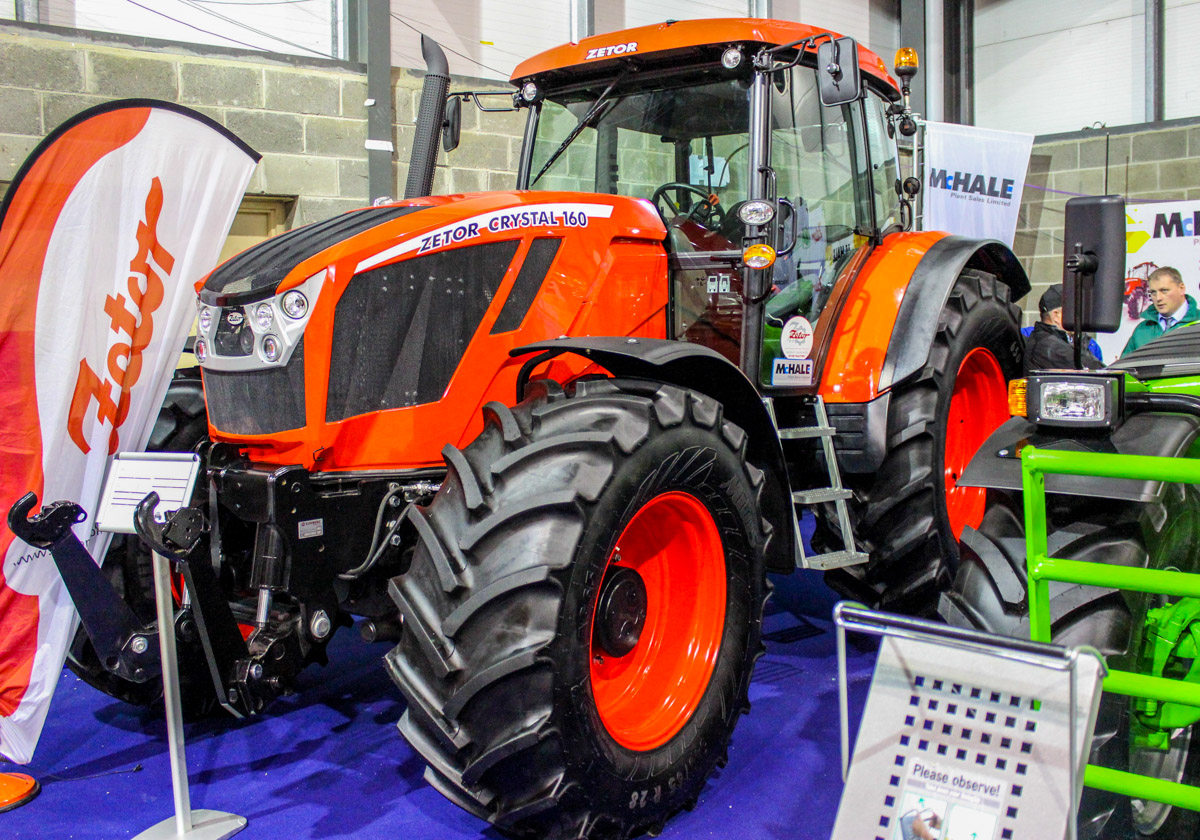 The unit on display at the show, complete with a front linkage and plenty of add-on items, lists at about €90,000 excluding VAT.

Solis is a brand name, referring to tractors sold by Sonalika (International Tractors Limited) of India. The brand has been represented here in Ireland for the past couple of years by Dublin-based D&S Machinery – the well-known distributor of Landini and McCormick tractors. 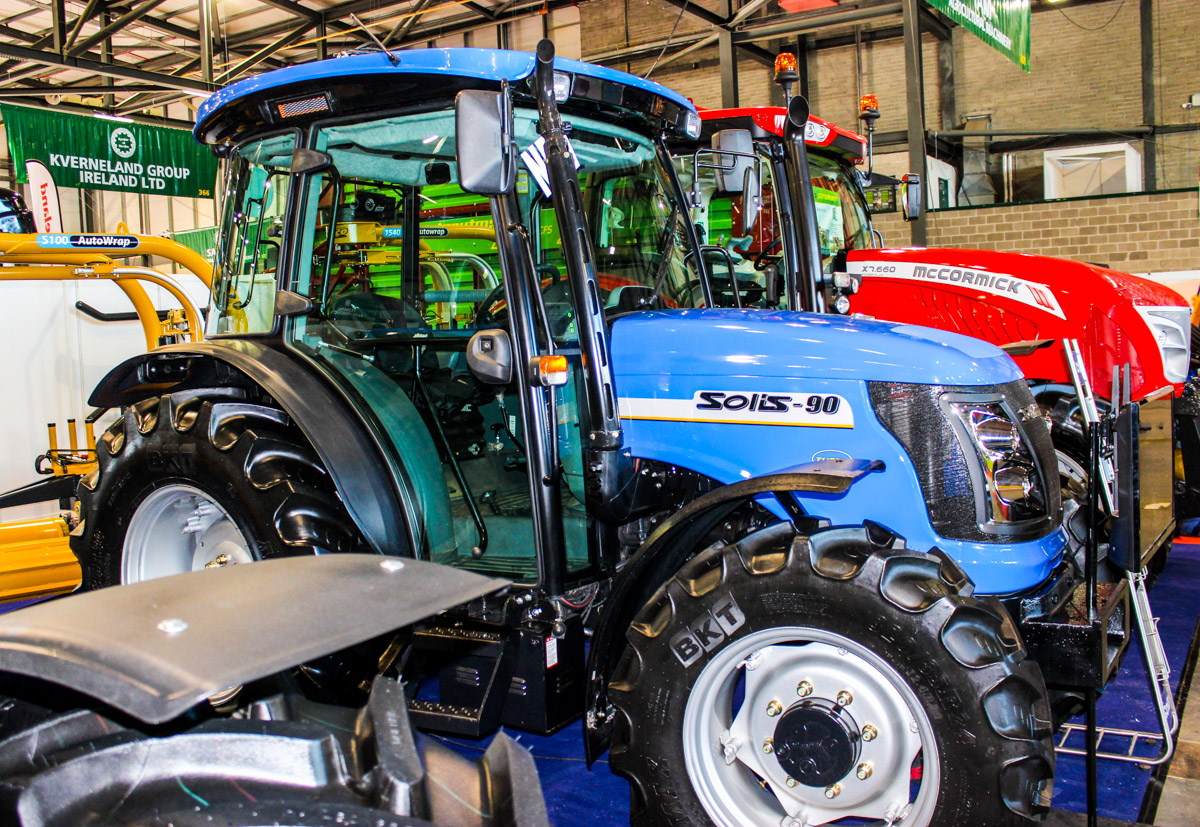 The Solis 90 (pictured) is rated at 88hp, courtesy of a 4-cylinder ITL engine. The gearbox offers 12 forward and 12 reverse gears.

According to D&S Machinery, there were significant enquiries from prospective buyers looking for a smart, no-nonsense loader tractor. The Solis 90 (4-wheel drive) sells for about €27,000 excluding VAT.

Jump on and go…

There was space for smaller tractors at the show too. Inchaquire Industries, based in Ballytore, Athy, Co, Kildare, exhibited this Labinprogres TPS Tuber 40 tractor.

This model is powered by a Lombardini 3-cylinder engine, which has a displacement of 2.2L and produces 37hp at 2800rpm. The simple transmission offers eight forward and two reverse gears. 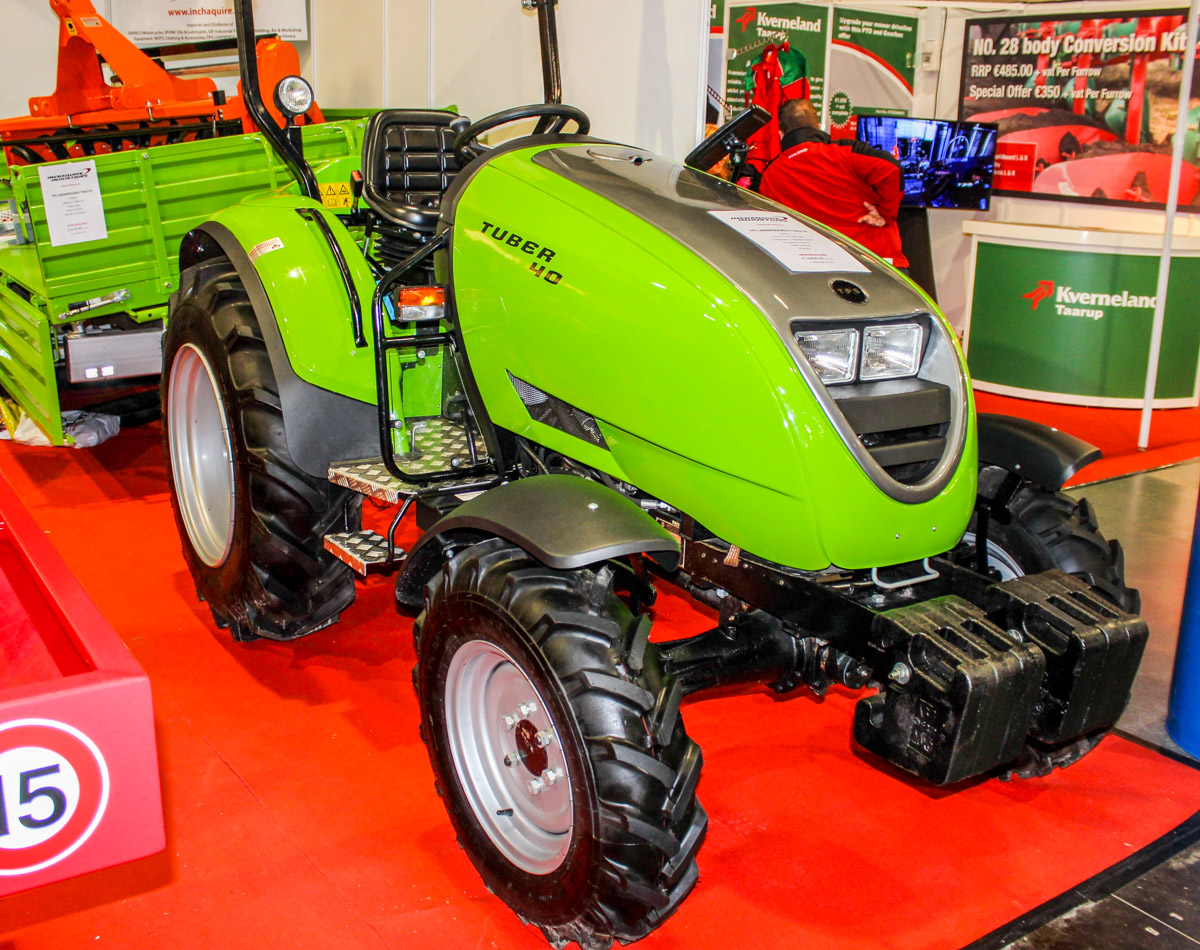 The manufacturer claims to hold a market-leading position in the former Yugoslavia. Inchaquire Industries was actively looking for more dealers at the show. Asking price for the Tuber 40, at the exhibition, was €16,456 excluding VAT.

The current and latest incarnation of the Valtra N Series was launched back in 2015. The 4-cylinder N Series boasts many of the same features found on its big brother, the 6-cylinder T Series, which reached its fourth generation in 2014. 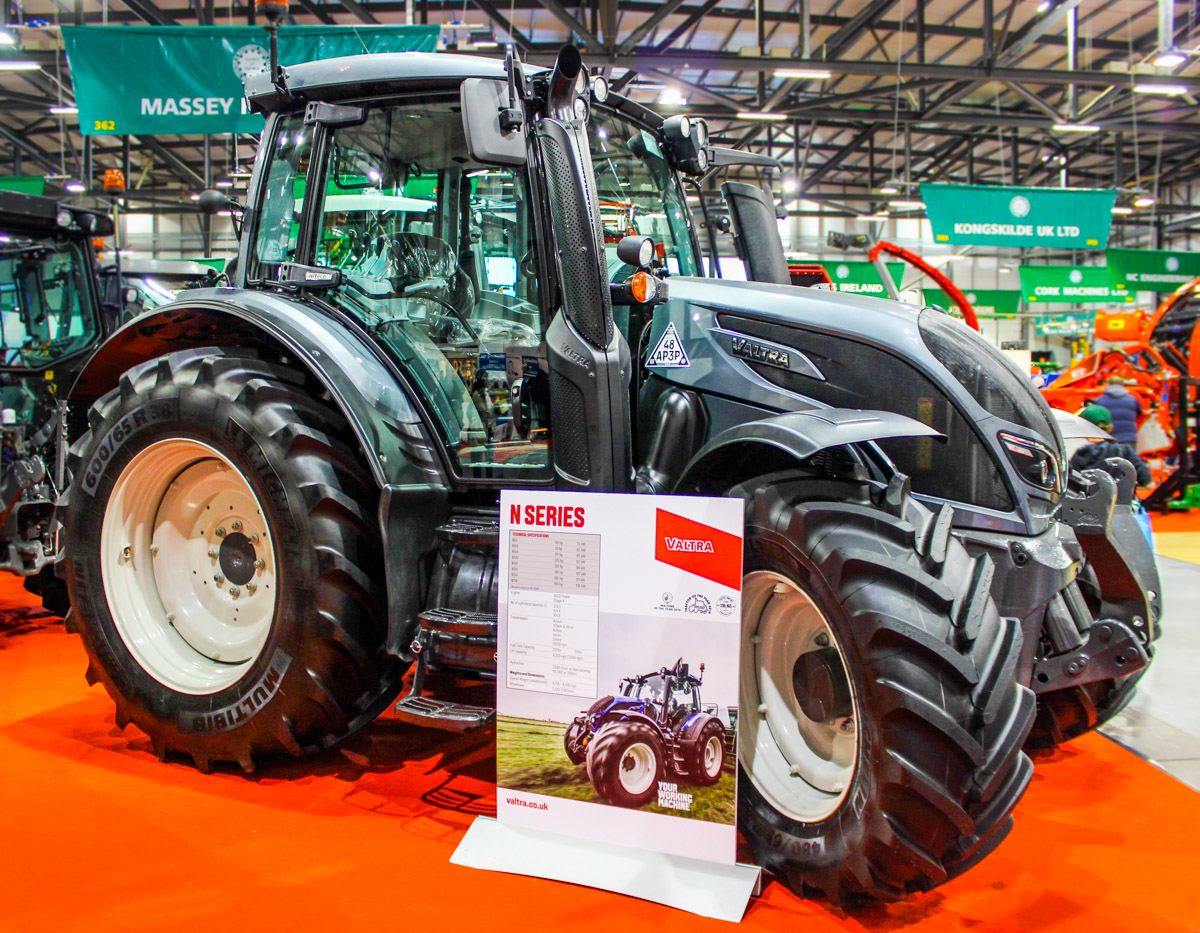 According to Valtra’s Philip Connell, the brand is looking ahead to a “solid” performance in 2017.

“Our market is very much in the 150hp+ sector; Valtra tractors aren’t pitched at the budget end of the market”.

The N154 HiTech on the stand at last week’s show, complete with front axle and cab suspension, front linkage and 600mm Michelin tyres at the rear, lists at about €109,000 excluding VAT.

Mid-range Kubota is a ‘clean’ runner

All of these components are neatly housed underneath the bonnet, without excessive bulk visible from outside. These tractors meet the requirements of the latest Euro Stage IV emission standards. 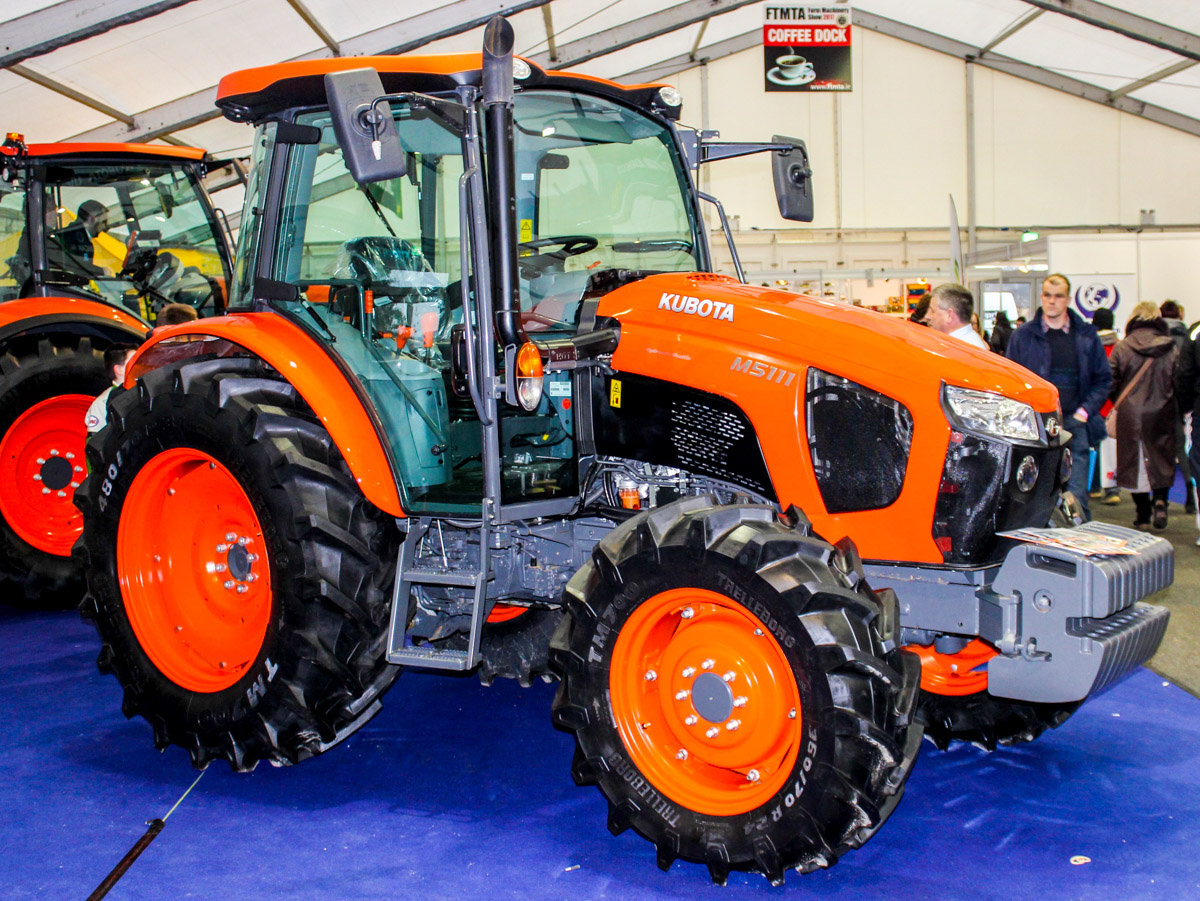 Commenting on the distribution network, Pryce said, that the company has seven dealers here in Ireland at present; there may be opportunities for more.

PJ Callan, based in Ardee, Co. Louth, brought its latest Kioti NX Series tractor to last week’s event in Punchestown. Daedong is the company behind the Kioti brand. It’s legacy stretches back to 1947; it all started in a small city in Korea.

Kioti now has a presence in a wide variety of countries around the globe, including Ireland. 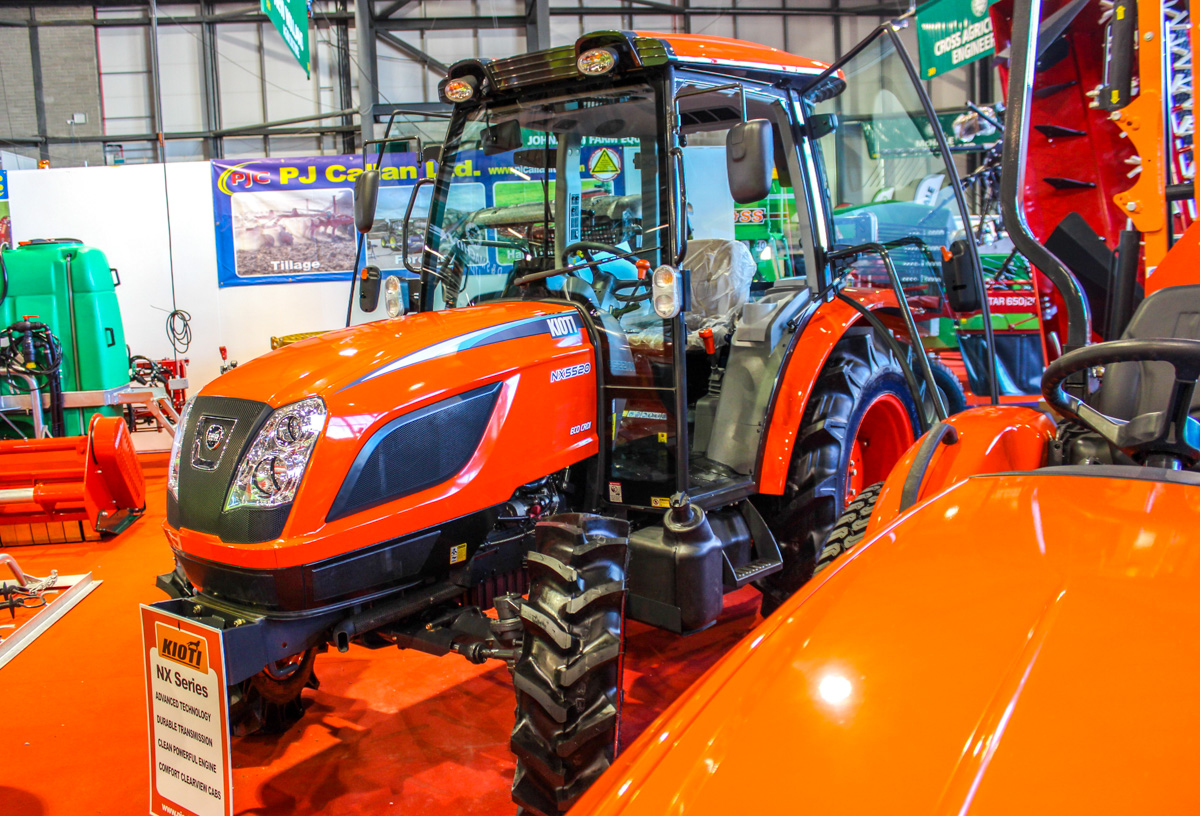 The Global Series is Massey Ferguson’s “basic spec” offering and has been designed to appeal to farmers in many different countries all over the world. This line-up now stretches from 75hp to 130hp. 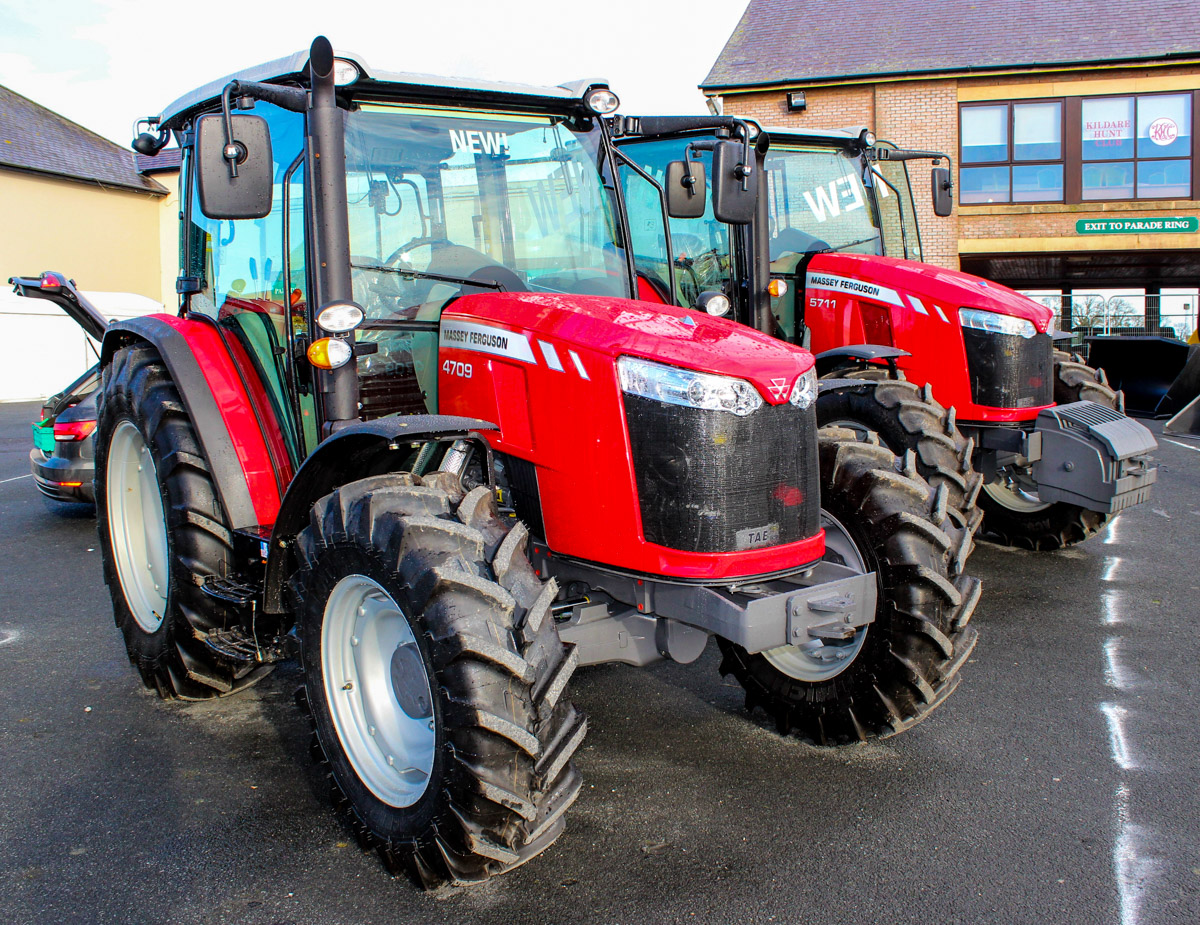 A 4709 (left) and 5711 (right) were showcased at last week’s event, in the outdoor exhibition area. Massey Ferguson also had a scattering of tractors in the main pavilion, vying for space with AGCO’s other partner brands – Fendt and Valtra.

Stay tuned to Agriland over the coming days to see further coverage from the show, including machinery highlights and interviews with key people in the industry.