‘People in early 30s being diagnosed with dementia’

People as young as in their early 30s, and from all walks of life, are being diagnosed with dementia, the 4th annual conference ‘Living with Dementia in Rural Ireland’, held in Boyle, Co. Roscommon, recently heard.

The main theme of the day was the right of people with dementia to live in their communities and to be treated like everyone else.

They should enjoy the same rights and opportunities as everyone else, with access available to a range of live-in, residential and other community supports, the gathering heard.

In Ireland, 55,000 people are presently diagnosed with the condition, but it is estimated that the real figure is probably closer to 100,000. Failure to diagnose, late diagnosis and reluctance by families to acknowledge the condition are the backstory, the conference was told.

Stigma, social isolation and lack of care supports and services are all issues, it was outlined.

Being diagnosed early can be a life-changer, giving the individual time to put their affairs in orders; make choices and work at keeping the diagnosis under observation; and control for as long as possible, it was emphasised. 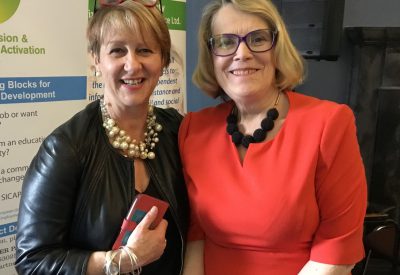 She hopes her continuous participation in research will one day help find a cure, along with bringing her experience to the widest possible audience, such as her board membership of Alzheimer Europe and chair of the working group of people with dementia.

John Quinn who lives in Brisbane, Australia, outlined how, in 2010, at the age of 59, he was given a diagnosis of dementia. He became a student again and began to read everything he could about dementia. John’s mantra is:

A diagnosis of dementia is not a lifestyle choice. However, now that I have dementia, I can choose my lifestyle, and I choose to live well with dementia.

Professor Eamon O’Shea of National University of Ireland (NUI) Galway and Helen Rochford Brennan spoke about the need in Ireland for a continuum of care.

Currently, there is nothing available between home care and nursing home care, it was outlined. Helen spoke about her need to have her social care maintained as she is physically healthy.

Person-centered care was highlighted by Professor Mary McCarron of Trinity College Dublin. She stressed the fact that ‘dementia care is slow care’ –  it takes time and it is not acceptable to limit care time.

She said that we need to look at other models of care, such as independent living and assisted living units where people can decide to downsize and move to a more manageable-sized home.

Delegates were told that in Scotland, there is a key worker to follow the person with diagnosis for the first year. They showcase the supports and services available, anything from the local bingo group to occupational therapists and speech and language.

This support is not available in Ireland and it would make a world of difference to the person with the diagnosis and to their family, the conference heard.

Remaining part of their community is key to the person living with dementia for social, mental and physical health and well-being. They must be supported to remain living as they did before being diagnosed for as long as possible, it was stressed.

In a case study, Jane O’Sullivan from rural Co. Kerry shared with delegates the story of her husband Donie. He was waiting over six months for cognitive therapy but Jane said it is too late, and those months were crucial for Donie to have been stimulated.

Jane’s daughter, Maeve, spoke about her dad slipping from them, not being able to do the things they did as a family such as a mountain trek. Appropriate and relevant services are simply not available for Jane or Donie, the conference was told.

London-based neurologist and author Dr. Jules Montague highlighted the importance of early diagnosis and the need to recognise that dementia is a syndrome – a group of related symptoms – associated with an ongoing decline of brain functioning.

This may include problems with:

Speaking afterwards, he paid tribute to Carmel Geoghegan who established Dementia Ireland, having been a primary carer for her late mother.

She is an advocate and supporter of campaigns that keep the spotlight on dementia and end-of-life care as a national health priority. The development of practice and policies that respect people living with a dementia diagnosis is her focus.

“During the time Carmel cared for her mother, the lack of basic information, supports and understanding were the most frustrating obstacles that they faced on a daily basis. Dementia Ireland hopes to help break down the stigma attached to a dementia diagnosis, to build better supports – both on a medical level and at a community level,” he said.

“Events like the conference offer a forum for stakeholders and all those interested in dementia to come together and share their knowledge and experience. It was an extremely informative afternoon.”