Despite many commentators suggesting that meat consumption was negatively effected by the Europe wide recession in recent years. The European Commission has said this is not the case.

In its latest outlook for the sector the Commission said it’s often expected that in developed countries and in particular in the EU, meat consumption will decline in the coming years mainly because of a change in consumption patterns, consumers tending to consume less meat for a number of reasons related to health, diet or ethics (environment, welfare, climate, waste reduction…).

In addition, it said that in 2013, when the meat consumption reached a very low level (at 64.5kg per capita in retail weight), many had in mind the economic crisis as main explaining factor.

However, according to the Commission’s outlook during economic crises, consumers try to keep on eating the same level of meat while choosing cheaper meat, like poultry, or cheaper cuts.

It said this is confirmed by a France Agrimer report on meat consumption, concluding that during the economic downturn consumption of beef goes down but poultry goes up together with some processed pig meat products.

In the end, it said meat availability, and their impact on prices, remain so far the major driving factor of total meat consumption developments in the EU. 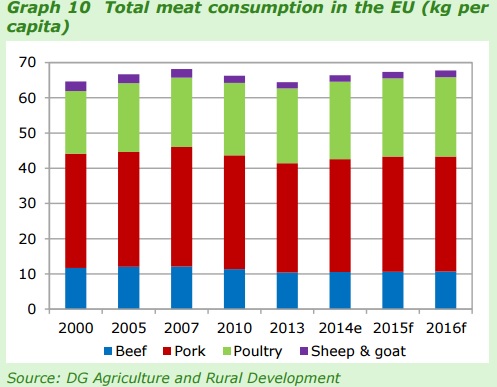 The Commission also said the year 2013 corresponds to a low in production levels of pig meat (further to the implementation of new welfare rules for sows) and beef (as a result of herd developments) and neither imports nor higher poultry production compensated for this loss.

On the contrary, it said as soon as supply grows again, like in 2014, it supports domestic consumption.

In 2014, per capita consumption is estimated to have gained 2kg compared to 2013, the Commission said.

In 2015 and 2016, with an expected higher production while the Russian market could remain closed, a further increase in meat consumption is expected to bring overall meat consumption closer to the 2007 record level, it said.