It’s St Swithin’s Day: Is the country set for 40 days of rain?

Is it raining where you are today? If it is then keep the brolly to hand for the next 40 days and nights!

July 15 is known as St Swithin’s Day and according to legend if it rains today then we’re in for 40 days and nights of rain.

However, if the weather stays fine then we’re all in luck and the summer will continue.

So who was St Swithin and why does he have a day named after him?

It’s believed he was a Bishop of Winchester in England and before he kicked the bucket in 862 he asked to be buried outside Winchester Cathedral, so the rain would fall on his grave.

Swithin wanted to be buried as an ordinary man in the graveyard and not a big fancy tomb and this is what happened however, several years later on July 15, 971 the bishop at the time moved his remains to a new tomb inside the cathedral.

Legend says that a fierce storm developed while they were moving the remains and rain bucketed down for the next 40 days.

These 40 days of rain were due to the saint being offended from being moved from the ordinary people.

Met Eireann’s rainfall map shows that today got off to a promising start, with the country clear of any rain at 7am, but what about the rest of the day? 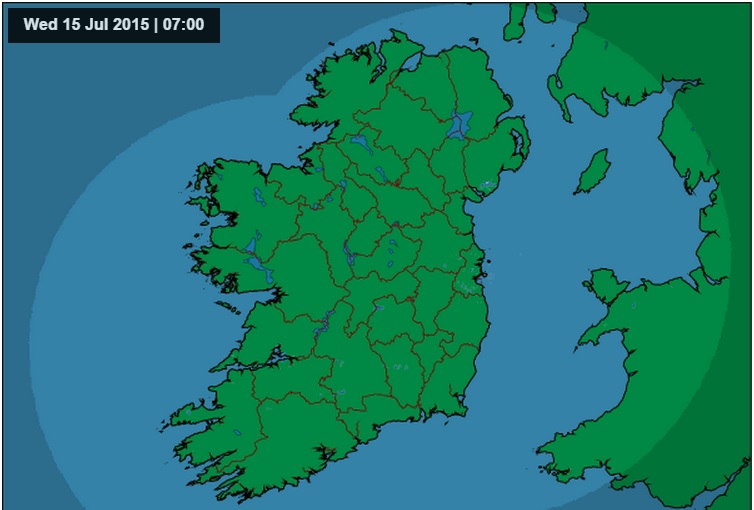 It says that it will be largely dry today with the risk of a few showers near the south coast as well as in northern areas.

There will be some sunny spells and temperatures will range from 15 to 19 degrees in light breezes, it says.

Tonight however, Met Eireann says that outbreaks of rain will move into the southwest and west tonight and will spread further into parts of Munster and Connacht overnight.

Sure, it would be a great country if only we could roof it!