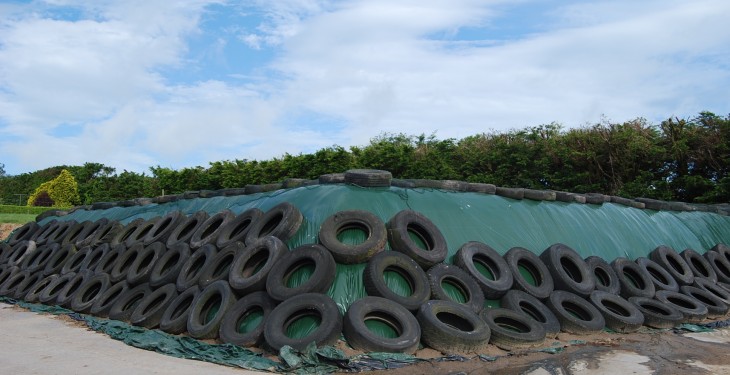 A recent visitor to Ireland, he added that farmers should also opt to increase chop length when ensiling grasses that have low dry matter values.

“Both these principles kick in when grass dry matters fall below 25%.

“And this is a regular occurrence in Ireland, given the weather that can prevail in this part of the world during the silage making season.”

Marley explained that high moisture grasses produce luxuriant levels of effluent, the production of which is exacerbated if clamps are rolled excessively throughout the ensiling process.

If the effluent cannot get away quickly enough, then the air spaces within the bottom meter or so of the clamp quickly fill with fluid.

“This slows down the rate of pH decline within that proportion of the clamp, leading to conditions that are extremely suited to the growth of clostridia.

“These particular bacteria will promote a fermentation focused on the production of butyric acid, which makes the silage extremely unpalatable at feed out. Clostridia also act to breakdown protein in the grass that has been ensiled.

“Increasing chop length helps to ameliorate this process, as does the inclusion of an effective additive.

“These effects have been confirmed courtesy of research carried out in countries around the world. This has been shown to be particularly the case in Norway, which has a climate very similar to that of Ireland.”

Again, if over rolling is attempted, butyric acid may well form at the bottom of the new grass profile.

“But, this time, the butyric acid formed will leak down into the first cut that has already been made, thereby devaluing what may have been a forage of exemplary quality.”

As a footnote to the story, Marley had some advice for guys hoping to be a ‘big hit with the girls’ on Valentine’s Day.

“High butyric silages have a very unpleasant aroma, which sticks to the hands for quite a while, no matter how often they are washed with soap and water,” he said.

“The solution to the problem is to use toothpaste instead of soap. The bicarbonate in the toothpaste neutralises the butyric acid residues.”