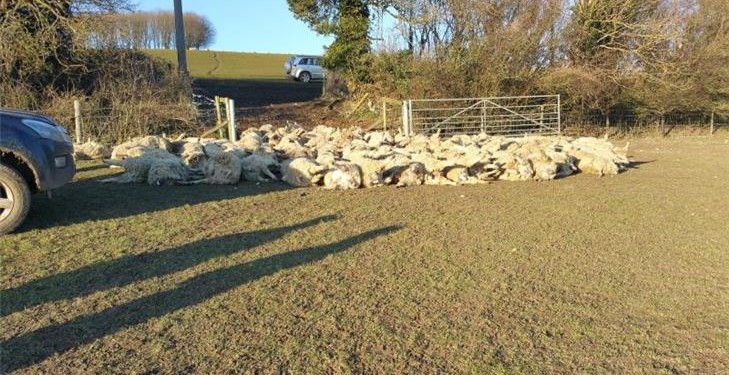 In what has been described by experts as the UK’s worst sheep-worrying incident in living memory more than one hundred sheep have died in near Chichester in West Sussex.

According to reports, the sheep, many of them pregnant, had been herded into a tight group against a fence and gate bordering woodland where they had panicked and had either died from shock or by being crushed in the flock.

Sergeant Tom Carter from Sussex Police said he has have never seen or heard of sheep-worrying on this scale before.

“This was a terrible sight. While there are no signs of any of the animals being savaged, we are all but 100% certain that their deaths were brought about by dogs.

“The flock was last checked around lunchtime on Sunday, so the incident could have occurred at any time over the next 24 hours. However, if as we suspect it was a dog attack, it may well have happened in daylight and we want to hear from anyone with information about it.

“This is not just about the Wyeth’s livelihood – and it will cost him at least another £2,000 to dispose of the carcasses – but also his emotional attachment to the animals that he has raised and nurtured.”

James Osman, the National Farmers’ Union adviser for Sussex, said it was the worst incident of its kind in living memory and talking to colleagues around the country, the number of deaths is double what we have come across in the past.

“We are in full support of the police’s efforts to discover whose dog or dogs were responsible and urge anyone with information to get in touch with them.”