The Ornua Purchase Price Index (PPI) the monthly indicator of market returns on dairy products sold by Ornua continued its downward trend in February falling slightly to stand at 85.4.

The January Ornua PPI had dropped to 85.7, which is suggestive of a milk return of around 25-26c/L.

It’s a record low for the Index, which had been in place since early 2011, and the current value suggests a milk price of around 7c/litre below the average for the 5 year period.

The February return is down some 13% on the same month last year and a massive 36% on returns posted in February 2014. 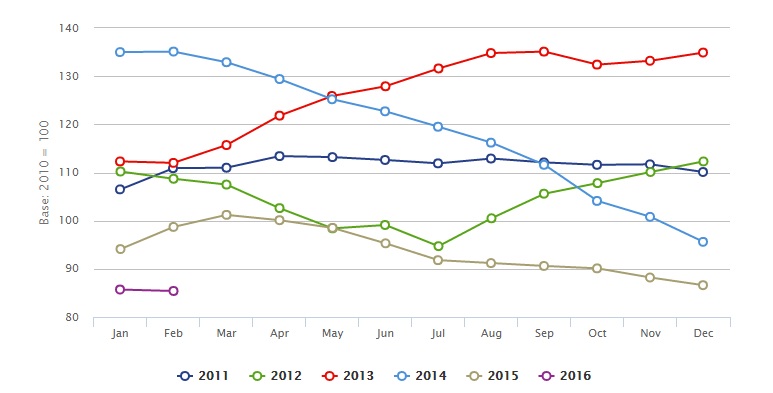 Meanwhile, the market support measures currently in place in the EU are starting to show signs of strain in the face of continued high levels of milk production, according to the ADHB.

It says while there was some growth in trade in 2015, it was not enough to stop a build-up of stocks, particularly for skim milk powders (SMP).

With the spring approaching, it warns that current levels of market support may not be enough to stop prices falling even further.

Under the intervention scheme, operators in the dairy sector can offer SMP to the measure at fixed prices up to a limit of 109,000t. If the rate of entry continues, at the current average of 6,000 tonnes/week, intervention will be full by the end of April.