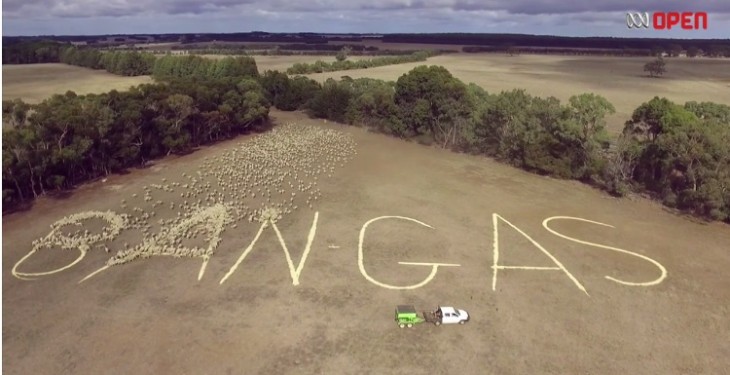 A farmer in Australia has used thousands of sheep to protest against the mining of gas reserves in the area where he farms in Victoria.

Using 2,000 sheep and a feeder, he spells out ‘ban-gas’ across a field and gets the sheep to eat the feed.

The farmer, Mal Rowe, explains that he’s been feeding the sheep this way for a couple of weeks.

“To start off with they were not really responsive and weren’t good spellers at all.

“We initially tried spelling out the letters as the sheep were in the paddock but that didn’t work, they just mobbed us.

“So, we spell out the letters first and then we let the sheep into the paddock and they’ll find the grain and then spread themselves across the message.”

When I start feeding out the grain, I’ve got two lines that I’ve drawn with sticks and keep within them – I know that’s the top and the bottom of the letters.

He says that thereafter, it’s just freestyle he’s got no GPS and nothing it guiding him.

“It does work. These animals, they represent the animals that an unconventional gas industry will impact upon big time.

“The land here is currently highly productive for agriculture and there are huge resources there in terms of fertile soils and rainfall is guaranteed.

Rowe says that this allows them to have stocking rates that eclipse most other parts of Australia in terms of sheep and cattle as well as allowing them to grow a variety of crops.

Personally, I haven’t chained myself to a bulldozer or sat up in a tree for weeks on end, but I’m fully committed to standing up for things I believe in.

“Yes, we are being listened to, are we being heard? Different question. Our endeavour is serious it’s ongoing, we won’t back away from this at all until we get a definite answer from the government.

“That answer we want is a ban.”