Glanbia, along with a number of partners, has launched plans for a new €100m ‘Glanbia MilkFlex Fund’.

The fund it says will offer flexible, competitively priced loans to Glanbia milk suppliers with loan repayments which can vary according to movements in milk price.

Glanbia Co-operative Society has teamed up with the Ireland Strategic Investment Fund, Rabobank and Finance Ireland on the initiative.

A key feature of this innovative loan product is that it will have inbuilt ‘flex triggers’ that can adjust the repayment terms in line with movements in Glanbia Ingredients Ireland’s (GII) manufacturing milk price, thereby providing farmers with cash flow relief when most needed.

Rabobank, the Ireland Strategic Investment Fund, Finance Ireland and Glanbia Co-Operative Society plan to invest in the Fund while Finance Ireland will also originate the loans and manage all aspects of the Fund.

Subject to underwriting criteria, the interest rate charged on the loans will be a variable rate of 3.75% above the monthly Euribor cost of funds (with a Euribor floor of zero).

The loans will have a standard term of eight years, but may be extended by up to a maximum of a further two years when volatility triggers are enacted.

The key features of the proposed loan product are: 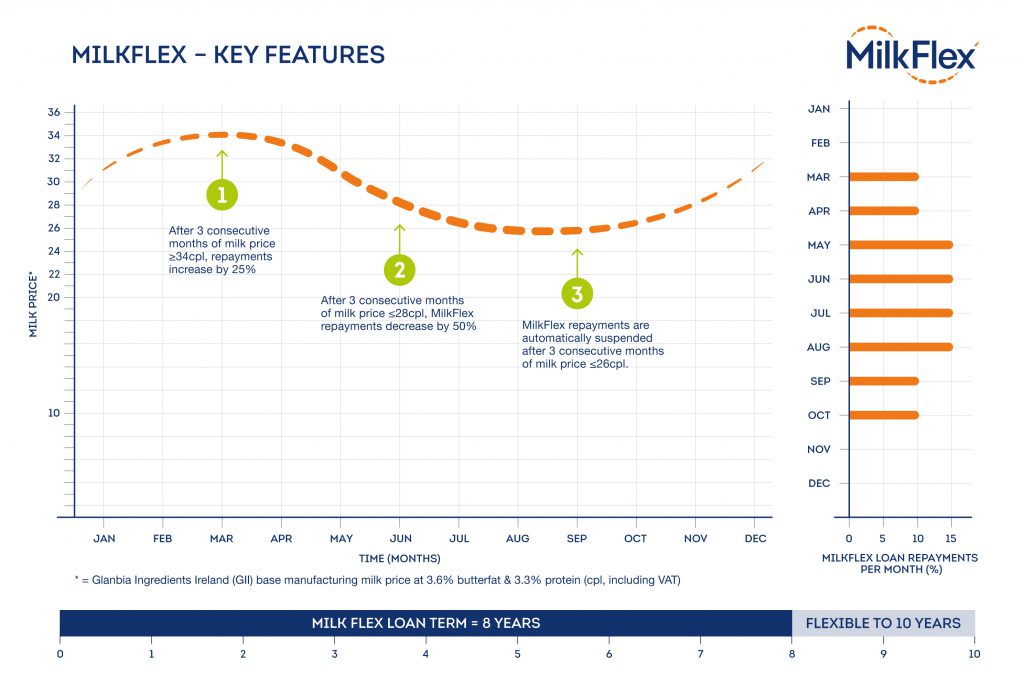 From a milk supplier perspective, other key features of the Glanbia MilkFlex Fund include:

Subject to completion of the legal documentation, it is expected that the Fund will be made available to farmers from May 2016.

Finance Ireland will host a series of workshops in the GII catchment area in April to provide information to milk suppliers interested in making an application for funding from the Glanbia MilkFlex Fund.

Finance Ireland will manage the origination of loans from the Fund and will require a clear business case in order to justify the lending decision. Each applicant must meet eligibility and underwriting criteria. None of the other investors will be involved in lending decisions, or in the provision of advice or otherwise to individual suppliers in relation to participating in the Fund.

The detailed terms and conditions on which the loans will be made available will be set out in documentation to be sent to milk suppliers on behalf of the Fund.

“I am very pleased to launch this new initiative aimed at providing access to flexible, competitively priced finance for dairy farmers. This new model of funding for milk suppliers is an international first and will mitigate the investment risks for milk suppliers. 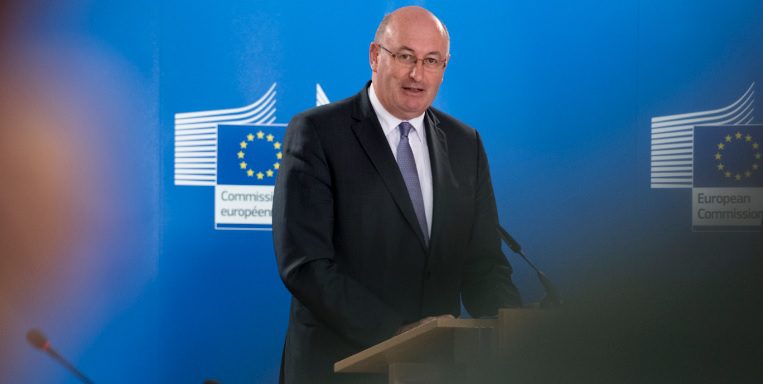 “The Glanbia MilkFlex Fund comes as a welcome addition to the Fixed Milk Price schemes offered by Glanbia. It will be a valuable tool in assisting dairy farmers to manage income volatility, which is particularly challenging for family farms across the EU. Using innovative financial instruments to help farm families across Europe is a key priority for me and the Glanbia MilkFlex Fund can serve as an important pilot project in the drive to roll out such instruments.”

Minister for Agriculture, Food and the Marine, Simon Coveney

“I welcome this initiative which will help suppliers cope with global dairy market price volatility. While any decision to invest must be based on sound financial planning, it is important for farmers to be able to access affordable financing in a timely manner. 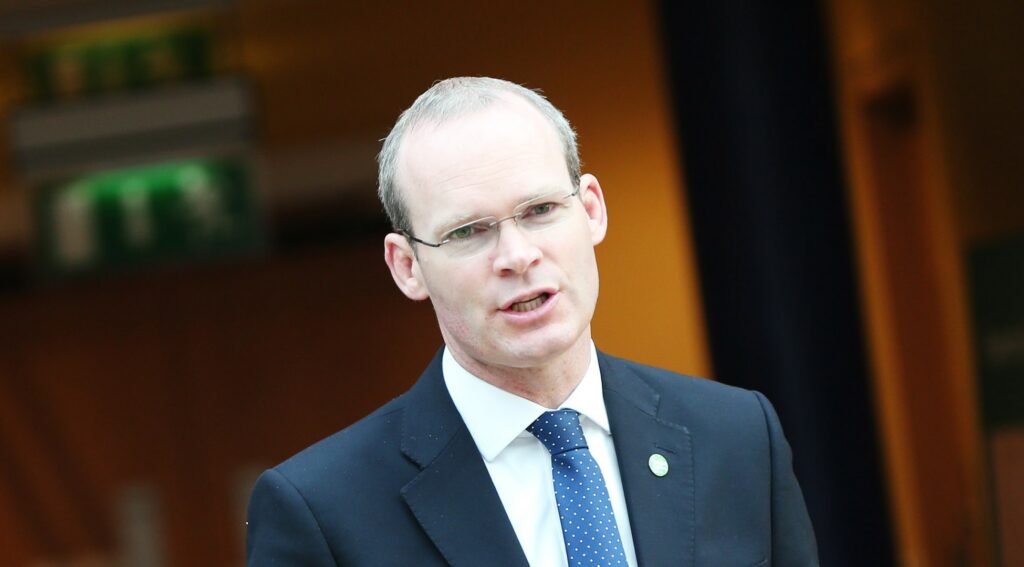 “I welcome the creation of this innovative funding mechanism and the role of the Ireland Strategic Investment Fund as a co-investor, alongside Rabobank, Finance Ireland and Glanbia Co-operative Society in making it available to Irish dairy farmers.” 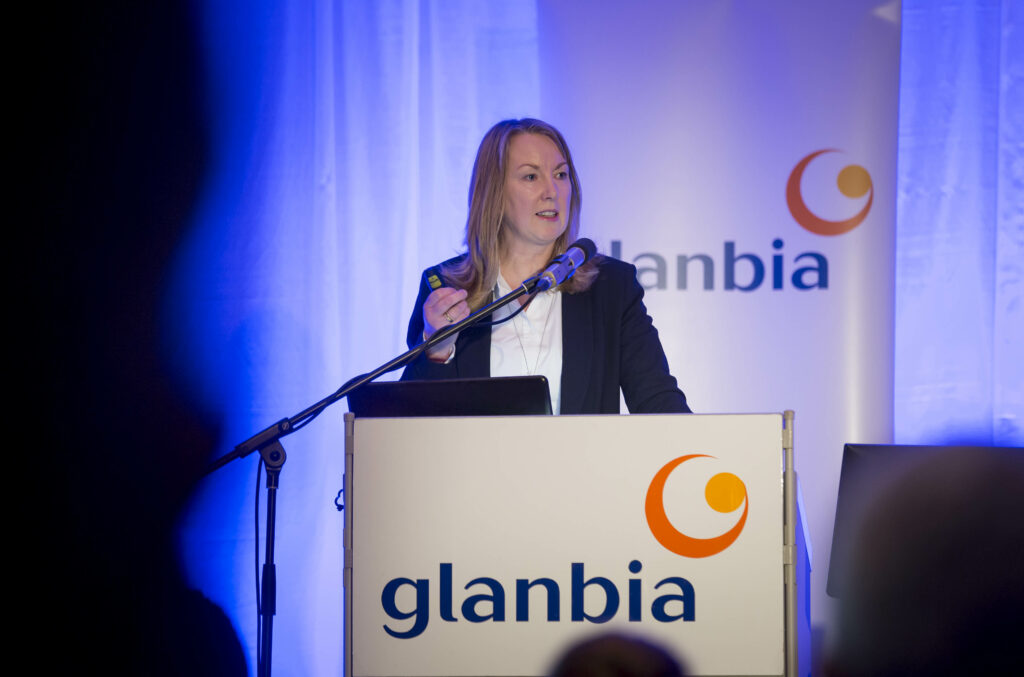 “This product is designed to match the cash flow generated by a dairy farm enterprise, with no repayments during certain times of low prices and increased repayments at times of high prices. We are very appreciative of the support of our partners – the Ireland Strategic Investment Fund, Rabobank and Finance Ireland – in bringing the Glanbia MilkFlex Fund to market.”

IFA National Chairman Jer Bergin said the Glanbia MilkFlex Fund loan initiative, a European pilot scheme, was a welcome innovation marking a new departure in farm finance which would raise the bar for the farm finance offerings which will now be expected from all financial institutions.

“The Glanbia Milk Flex Fund will be available to Glanbia milk suppliers with a Milk Supply Agreement from April/May, and will be watched closely by milk suppliers to other co-ops, and by farmers in other sectors.

“Our financial institutions must respond with equally well-priced and flexible financial packages for farmers in all sectors, including for short term and seasonal finance.”.

However, it must spark some serious rethinking by our conventional banks of the pricing and repayment structures of their own offering to all dairy farmers, regardless of which co-op they supply”.

“Also, while this scheme addresses the need for investment financing, it does not deal with the most pressing issue of the moment: the need for well-priced, flexible short-term cash options. This is an area where banks really need to step up to the mark,” he said.

O’Leary said IFA would meet with all the banks on their short and long-term farm finance products in two weeks’ time, and would expect a meaningful competitive response to this latest development, and to the current cash flow crisis on dairy and other farms.

ICMSA’s Dairy Committee Chairperson, Gerald Quain, said that credit was due to the processor for coming forward with an option that demonstrated imagination and understanding.

Welcoming the scheme, he said its connection with milk price would give suppliers a degree of latitude and effectively linked repayments to the supplier’s ability to repay.

The ICMSA Dairy Committee Chairperson said that the scheme was now the benchmark in terms of innovation and proactive planning and other financial institutions like the pillar banks and Co-ops should draw up similarly flexible and robust schemes that would allow their own hard-pressed suppliers to put their milk supply business on practical medium-term financing.