The number of farmers who claimed Farm Assist in March fell by over 10% compared to the same month last year, according to latest Department of Social protection figures.

A breakdown of the number of recipients in each of the months by county is detailed below.

Notably Mayo, Galway and Donegal accounted over 40% of recipients in March of this year. 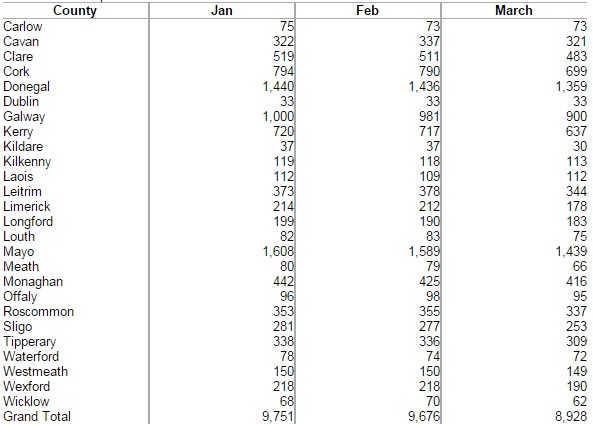 According to the Minister for Social Protection Joan Burton the average time taken to process Farm Assist appeals by summary decision in 2014 was 23.2 weeks and 28.3 weeks for those requiring an oral hearing.

The average time for 2015 to the end of March was 16.2 weeks for summary decision and 24.6 weeks for oral hearing.

The Minister also said the number of Farm Assist appeals decided by oral hearing in 2014 was 112 of which 70 (62.5 %) had a successful outcome for the appellant.

Farm Assist is a means-tested income support scheme for farmers. To qualify for Farm Assist, you must be a farmer, farming land in the State, aged between 18 and 66 and satisfy a means test.