The North/south heifer price difference has fallen to less than €40 on a 280kg R3 grade heifer carcass, the latest figures from the Livestock and Meat Commission show.

This equated to a difference of 14.2c/kg in the week ending March 12; with farmers in Northern Ireland continuing to get paid more than their counterparts in the Republic of Ireland.

At the end of the second week in March, Irish farmers were being paid 385.4c/kg for an R3 grade heifer; leaving the Irish price in eighth position in the EU heifer price league table.

This was an increase of 1.3c/kg compared to the price paid to farmers a month previously, figure show.

Farmers in the North received the equivalent of 399.6c/kg in the week ending March 12, which placed it in fifth place in the EU league table.

This was a decrease of 7.1c/kg from the 406.7c/kg that was paid to farmers in the North in the week ending February 12.

Meanwhile, the average R3 heifer price in the EU stood at 383.6c/kg at the end of the second week in March.

This represented an increase of 1.7c/kg from the EU average of 381.9c/kg in the corresponding week in February, figures show.

The EU average price increased slightly in a week when the euro was the equivalent of 86.7p. 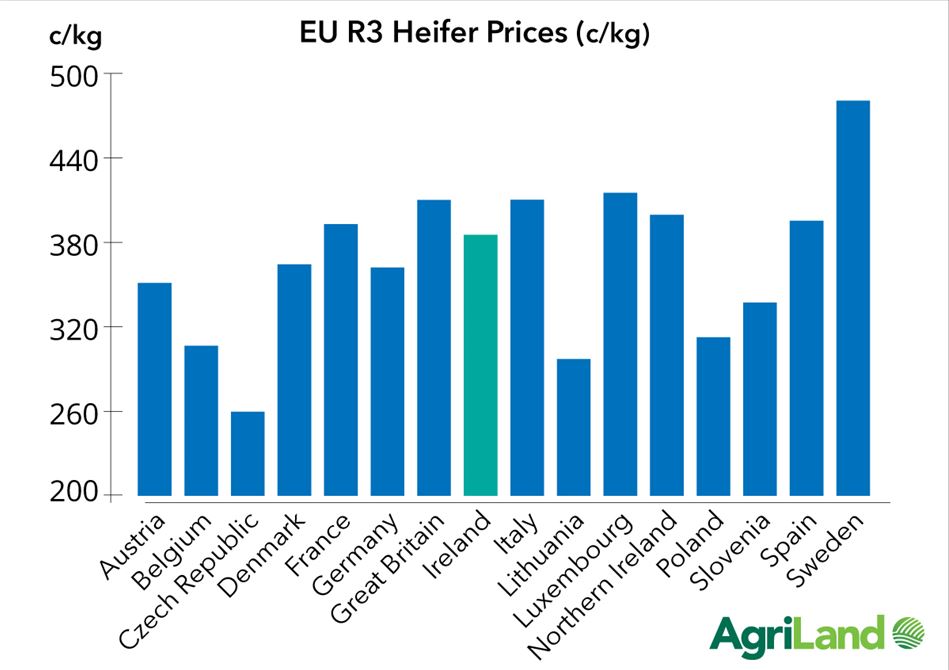 Figures sourced from the LMC

The differential between the R3 heifer price in the North and the EU average narrowed from 24.8c/kg in mid-February to 16c/kg in the week ending March 12.

However, the Irish price remained just slightly above (1.8c/kg) the EU average.

British prices dropped to fourth in the EU league table at the end of the second week in March. British farmers received an equivalent R3 heifer price of 410.1c/kg.

This was a 7.3c/kg decrease from the 417.4c/kg paid to farmers during the week ending February 12, figures show.

The differential between R3 heifer prices in Britain and the EU average narrowed from 35.5c/kg in the week ending February 12 to to 26.5c/kg in mid-March.

Despite the drop, British heifer prices remain well above the ones received by farmers in both the Republic of Ireland and Northern Ireland.

This equates to a difference of €29.40 and €69.16 on a 280kg carcass for farmers in Northern Ireland and the Republic of Ireland, respectively.

'Commission's response to Brazilian scandal is not enough'