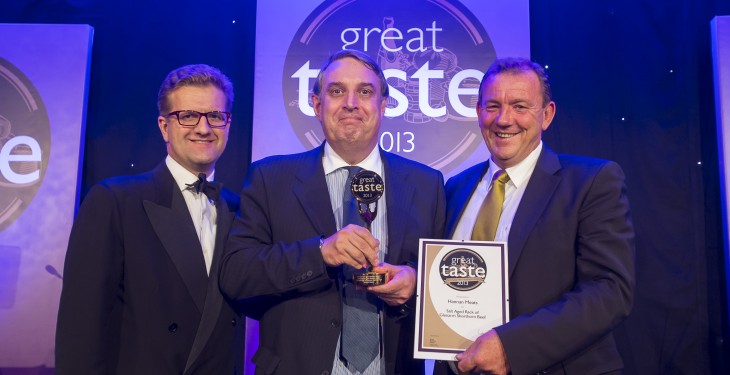 The View from Northern Ireland: On the back of two consecutive years when producers from Northern Ireland took the top award at Great Taste, a galaxy of stars and awards have been presented for 2013 – to Hannan Meats of Moira in Co Armagh, to Simon Dougan, chef at Yellow Door Deli in Craigavon, Co Armagh and to En Place Foods of Cookstown, Co Tyrone.

Hannan Meats of Moira in County Down was this year awarded the Golden Fork for Best Speciality from Northern Ireland, sponsored by Invest Northern Ireland, for its three-star Salt-Aged Rack of Glenarm Shorthorn Beef.  This was just one of five Hannan Meats’ products that reached the Great Taste Top 50 Foods and judges were abundant with their praise for the Rack of Shorthorn which was described as “A revelation.  Sweetness in the meat and absolutely right there”.

The award, presented at the annual Great Taste Golden Fork dinner in London on 9th September, once again positions Hannan Meats amongst the very top food producers in the UK and Ireland and reflects the exceptional farming and butchery skills of Peter Hannan and his team.

A new Golden Fork Award for 2013 – for Best Deli and Farm Shop Signature Dish was presented to Simon Dougan of Yellow Door Deli in Craigavon.  Judges felt that Simon’s Braised Irish Beef Cheek and Smoked Potato Pie was an outstanding dish which showed “provenance, regionality and expertise in a perfect pastry crust”.  This award was sponsored by Huhtamaki, makers of eco disposables.

The Golden Fork for Ambient Product of the Year (sponsored by Petty Wood) was presented to En Place Foods for its 3-star Sea Salted Caramel with Fennel Pollen – making it a hat trick for Northern Ireland.

Judges commended En Place for a product which was “perfectly balanced, sweet and rich, a real treacle-y hit, with added layers of flavour from the fennel pollen which was an exciting and well-judged combination”.

Also nominated in the region was McCartney’s, also of Moira in Co. Down for its three-star Mushroom, Leek and Smoked Garlic Tart, showing great skill in vegetarian food for an award-winning butcher. En Place Foods of Cookstown, Co Tyrone was also a finalist with an exceptional 3-star Sea Buckthorn and Lime Jam.