It is high time that the decade-old “dysfunctional” Quality Payment System (QPS) is reviewed, according to the Irish Cooperative Organisation Society (ICOS).

In a cutting statement on the matter from the cooperative representative body, ICOS acknowledged the reasoning behind the EUROP conformation grading and classification system in terms of grading the quality of meat.

However, it noted that no citation or scientific basis was ever provided for the introduction of penalties on farmers’ cattle if an animal was moved more than four times or moved within the last 70 days.

These penalising measures were nonetheless included by the processors as quality parameters, the organisation noted.

In the statement, ICOS said:

Regardless of the necessary grading, citing an animal as being inferior because it simply moves to or from another farm is wrong.

“Currently, the Irish meat factories enforce measures through the QPS where cattle that have moved farms in the last 70 days before slaughter are penalised and don’t qualify for the QPS bonus.

“The QPS is also withheld if cattle have had more than four movements from farm to farm prior to slaughter, even if all farms are quality assured.”

The association added that, back at the end of 2015, a number of mart organisations including ICOS met the Directorate General for Competition in Brussels seeking action on “combined meat processor and multiple retailer dominance in the beef sector”.

“DG Competition asked for proof of restrictive practices. ICOS, the Livestock Auctioneers Association (LAA) in England and the Institute of Auctioneers and Appraisers in Scotland (IAAS) engaged in formal correspondence to research this issue further with key retailers.” 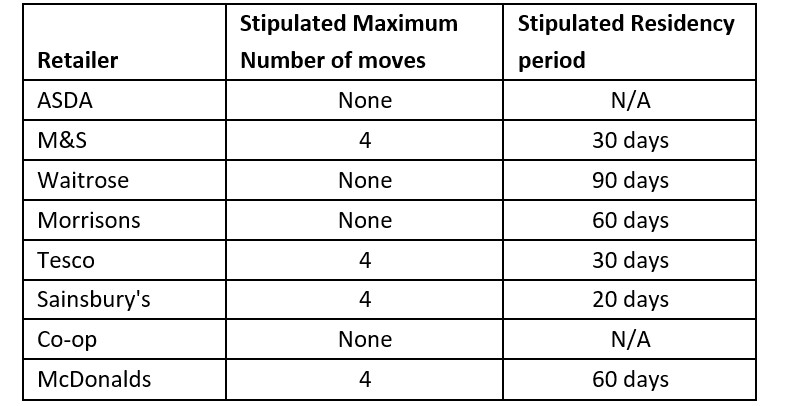 ICOS noted the findings of this research in the table above.

Summarising this, the society said: “It became clear that no UK retailer has a 70 days residency or more than four farm residencies combination as a requirement.

Why then do our meat factories insist it’s a ‘customer requirement’, and why is it persistently used as part of the current QPS bonus scheme when no such requirement exists?

Continuing, the ICOS statement noted that, anecdotally, the marts bodies were informed that the two major discounters, Aldi and Lidl, have no restrictions on their purchasing criteria.

“They did say however that they want all beef to be farm assured beef, either through Bord Bia’s scheme in Ireland or via the Red Tractor Scheme in the UK.”

ICOS highlighted the “mixed messages” coming across from retailers.

“McDonalds, for example, clearly stated in the Beef Forum, and also clarified by email to ICOS, that it has no additional restrictions on its beef purchasing policies over and above the Bord Bia quality assurance scheme.

“However, its preferred processing plant, OSI in England, will not process any beef from a carcass that has moved more than four times or changed farms within the last 60 days.”

ICOS claimed that the measures by the factories “radically exceed the provisions” of the Bord Bia Beef and Lamb Quality Assurance Scheme which, it says, allows for movements between quality-assured farms during the final 70-day period prior to slaughter.

“These practices stop free trade in animals even though the livestock are compliant with the relevant regulations in Ireland and the UK.

This has subverted fair competition for livestock and has distorted trade and pricing in Ireland and the UK.

“While this is to the detriment of cattle prices, it is to the considerable benefit of Irish meat processors and UK multiple retailers.

“The so called ‘quality standards’ are forcing farmers to forego selling through the marts system which has undermined free trade and proper price transparency,” ICOS said.

“These can have a throughput of tens of thousands of animals. This gives processors the capacity to increase supply at times of peak demand and to dampen market prices.

ICOS is aware of US legislation being enacted to outlaw meat processors from owning beef feedlots because of the distortion to free trade. The EU would do well to follow this lead and protect livestock producers.

“The factories contend that the basis for their restrictions is consumer driven – but there is no factual basis for this.

“The restrictions are simply being used as a market control measure,” the group claimed.

Concluding, the ICOS statement said: “10 years on, the QPS is not fit for purpose.

“Quality parameters must be scientifically based to ensure that the QPS is not simply a crude tool to effect market control by meat processors and UK multiples, as it currently appears to be the case.”