Increases in support payments led to higher suckler farm income figures in 2016, which otherwise would not have been the case, according to Teagasc.

Despite a reduction in prices, the average suckler farm income increased marginally by 2%. However, the sector still reported the lowest average farm income in 2016, at €12,908.

Teagasc attributes the increase in farm income in 2016 to an increase in direct payments. Support payments increased by 11% year-on-year, largely due to additional payments received under the Beef Data Genomics Programme (BDGP) and the Green, Low-Carbon, Agri-Environment Scheme (GLAS).

According to Teagasc, prices for calves and young cattle dropped by 10% in 2016. This resulted in market output decreasing by 5%, despite a 3% increase in cattle numbers.

Direct costs increased by 3% on the average suckler farm; increased expenditure on feed being one of the reasons for this rise. However, this increase was cancelled out by a 3% decline in overhead costs. Total farm costs were unchanged in 2016 as a result. 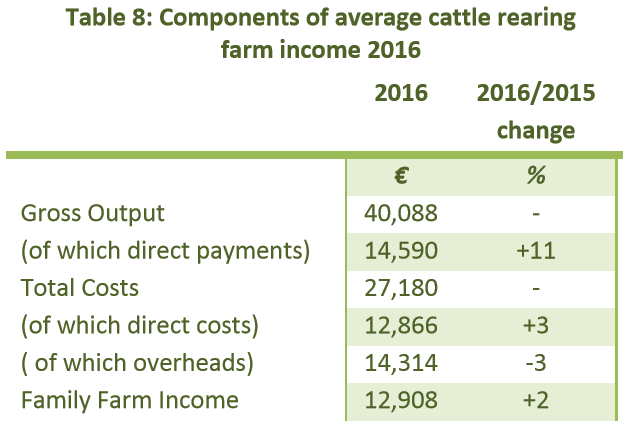 Suckler farms are characterised by low profitability and small holdings; the average farm size in 2016 was 36ha, with an average herd size of 40 livestock units.

The sector had the second lowest average farm income per hectare, at €358/ha.

Suckler farming is the most dependent sector on support payments; direct payments contributed 113% to farm income. Farmers received an average direct payment of €14,590 in 2016.

Advertisement
Average market income – income before direct payments – was in the negative, at -€1,682; indicating that, on average, no profit from production is made. Direct payments received by these farms are paying for the losses in production.

The Basic Payment Scheme (BPS) made up 64% of the direct payments received by suckler farmers. Disadvantaged area and environmental schemes made up 13% and 9% respectively; while 10% of overall direct payments were made under the Beef Data Genomics Programme (BDGP).

According to the Teagasc National Farm survey, 38% of Irish suckler farms are economically ‘vulnerable’ – the farm business is not viable and neither the farmer nor spouse work off-farm.

Only 21% of cattle-rearing farms are ‘viable’ – farm income can remunerate family labour at the minimum agricultural wage and provide a 5% return on the capital invested in non-land assets.

The remaining 41% of farms are categorised as ‘sustainable’ – the farm business is not viable. However, the household is still considered sustainable because the farmer or spouse has an off-farm income. 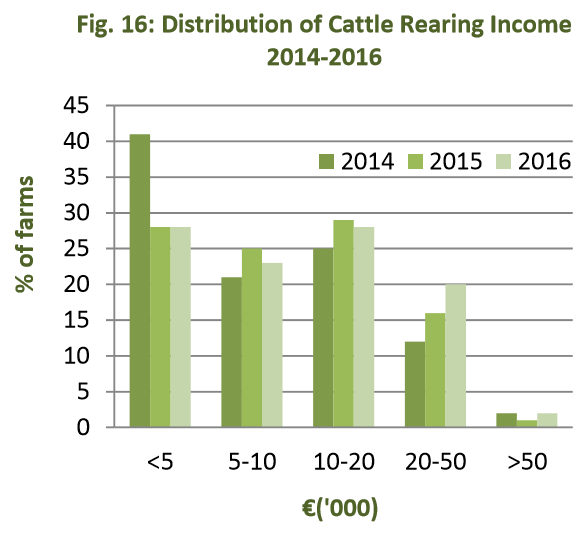 CSO: Sheep slaughterings up by 16.8% this year