An oral hearing into the Derryadd Wind Farm which was held in Longford on Wednesday, June 12, heard that there is no evidence of breeding curlew at the site.

Bord na Móna Powergen Ltd is seeking permission to develop the wind farm – and all associated infrastructure – comprising 24 wind turbines, nine of which will be located in Derryrogue Bog; eight in Derryadd Bog; and seven more located in Lough Bannow Bog – close to Lanesboro.

During the hearing, Dr. Tom Gittings – independent ecological consultant – on behalf of Bord na Móna told those gathered that in an effort to determine the various bird species on-site, he carried out field surveys that included vantage point, breeding wader, raptor and wintering waterbird as well as collision risk modelling.

He pointed out that a number of bird species including the curlew had been observed at the site of the proposed wind farm development from as far back as 2015.

Those gathered for the hearing also heard that in March of this year displaying birds were reported from Lough Bawn in the south-east corner of the site.

Meanwhile, submissions from the ‘No to Derryadd Wind Farm’ group, Irish Wildlife Trust and Birdwatch Ireland in respect of bird species recorded in and around the wind farm site and the subsequent ‘ornithological importance’ of the site, have been received by An Bord Pleanála.

During Wednesday’s hearing concerns were also expressed about the impact of the proposed wind farm on habitats used by the species.

Gittings told those gathered that the curlew was a ‘red-listed’ species due to “severe declines” in both its breeding and wintering populations.

It is now a very rare breeding species in Ireland with just 138 pairs recorded in the Republic of Ireland from 2015 to 2017.

Gittings then highlighted the fact that a displaying curlew was recorded in the south-east corner of the site in the summer of 2015.

“The location of the bird was 560m from the nearest proposed wind turbine; there were no records indicating the presence of breeding curlew in surveys carried out in the summers of 2016 and 2017.”

Meanwhile, the hearing heard that in the summer of 2018 a “dedicated” breeding curlew survey was carried out by Gittings.

He said it covered a large area of potential curlew habitat around the southern part of the wind farm site.

Below is a section from the breeding curlew survey in 2018. 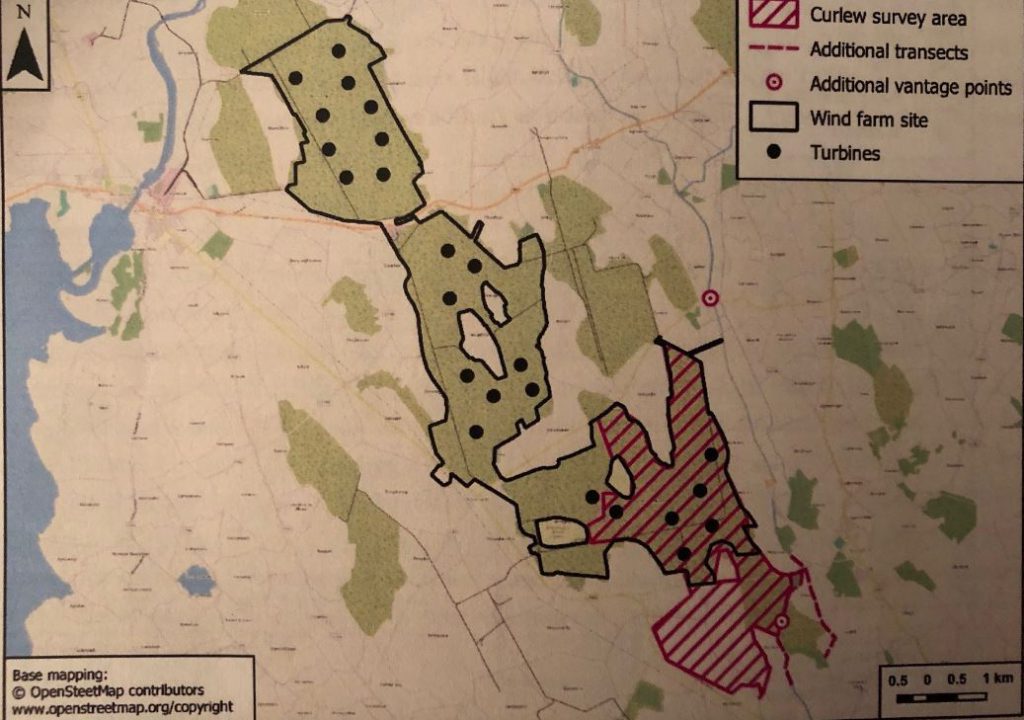 The wind farm site and surrounding areas do not support a significant wintering population of curlew.

“Any potential displacement impacts to non-breeding/wintering curlew will not be significant.”

The ornithology expert also pointed out that while there are records of displaying curlew from within the potential displacement buffer around one of the wind turbines, it appears now that it was a lone bird “that has not managed to successfully breed in recent years”.

“Its conservation significance is not clear,” he concluded.