No-deal agri supports to be announced at ‘appropriate’ time

An announcement on supports for farmers and agricultural businesses in the event of a no-deal Brexit will be made “at a time that is deemed appropriate”, according to Government sources.

Speaking to AgriLand in relation to progress on developing a package of emergency supports for the Irish agricultural sector in the event of a disorderly departure, a spokesperson for Minister for Agriculture, Food and the Marine Michael Creed said:

“The minister has been working with Government and the European Commission to ensure supports will be available to protect farmers in the event of a no-deal Brexit.

An announcement on no-deal supports will only be made at a time that is deemed appropriate.

“The evolving political situation is being monitored closely in this regard,” the spokesperson added.

Earlier today (Wednesday, March 20), UK Prime Minister Theresa May has said that she is “not prepared to delay Brexit any further than June 30” while speaking in the country’s parliament.

May confirmed that she had written to European Council President Donald Tusk requesting an extension to the Brexit ‘deadline day’ of March 29; she has asked for that date to be pushed back to June 30.

The prime minister expressed her hope that she would be able to revive the withdrawal agreement – which was negotiated late last year and has been defeated in two separate votes in parliament.

I am writing to inform the European Council that the UK is seeking an extension to the Article 50 period until June 30, 2019.

On Monday, the speaker of the House of Commons, John Bercow, ruled that the deal could not be brought back for another vote unless it was “substantially different”. 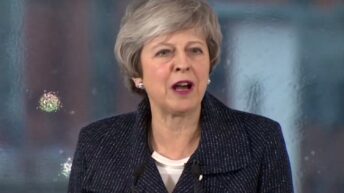 May: ‘Brexit will not be delayed beyond June 30’