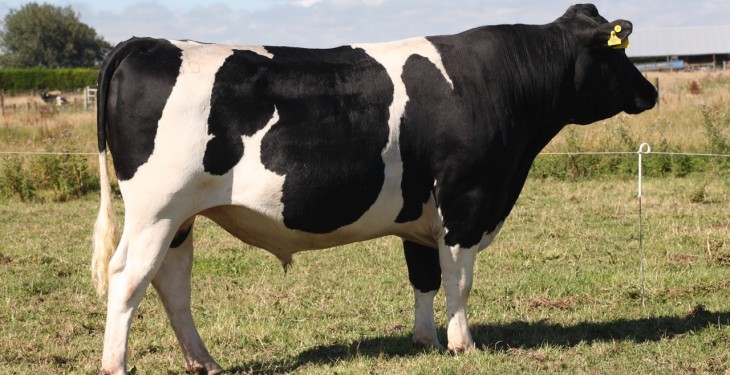 Observer who is ¾ Friesian and ¼ Jersey.

Utilising the benefits of cross breeding has been fundamental to the success of many New Zealand dairy farmers according to Jack Hooper, Principal Advisor, of the Livestock Improvement Corporation (LIC).

Hooper, who has 40 years’ experiences with LIC in a variety of roles, says that since 2000 there has been a very rapid increase in the number of crossbred cows in the New Zealand herd.

“The crossbred population now dominates the dairy herd here. There has always been crossbred animals in the population but it has really accelerated in the last 12 years.”

He said that approximately 70% of the calves born to a dairy LIC Sire will be a crossbred animal. Semen from LIC (sires) breed 75% of all dairy cows in New Zealand, he said, and most of those farmers are looking to breed an animal that is close to a 3/4 Friesian 1/4 Jersey. “They are trying to get some of the benefits of hybrid vigour but still breed a very efficient dairy cow.”

Hooper said that the dairy farmers in New Zealand have worked out that crossbred cows are performing best in their herds.

He said there are a number of farms in the south island, where the 3/4 Friesian cow is producing the same amount of milk solids at lighter live weight than a full Friesian. They’re getting more milk solids per kg of live weight so they are more efficient and that is partially because of the hybrid vigour, he said.

Hooper outlined that New Zealand dairy farmers have tried to figure out a breed that is working for them under their management system which is by-and-large grass based.

“Hybrid vigour, or cross breeding leads to a more efficient cow but it also obtains better pregnancy rates, lower SCC scores and less lameness. The extra herd life is about 220 days (for) a crossbred cow. And we also see benefits in other traits.”

The 3/4 Friesian cow seems to be the one that performs best under a range of management systems, according to Hooper.

“So that’s what you’d expect the first cross to be. But, the first crossbred is (actually) about 460kg as the hybrid gives you more, but you get more yield too. So you’ve only gone up a little in live weight but a lot more(solids).

“That’s how cross breeding gives you more efficiency. It’s the opposite to inbreeding.”

Hooper stated New Zealand farmers have chosen to stay somewhere between a first cross and a straight Friesian as they want a uniformity of animals.

LIC is running a series of open days next week, November 3-7. Anyone interested in attending should contact the LIC offices on 1800 60 40 20 or check out www.licnz.com/consultant.cfm