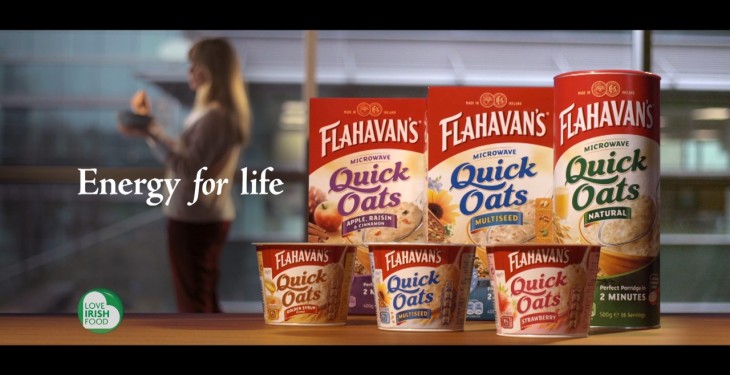 The new campaign is in support of its Quick Oats Porridge.

Flahavan’s has been milling quality oats at the family mill beside the River Mahon in Kilmacthomas, Co. Waterford for over 200 years.

The company is now tapping into the growing consumer demand for a healthy and nutritious breakfast that can be enjoyed anywhere.

The message of the campaign is to show the importance of a healthy bowl of Flahavans’s porridge in Irish people’s increasingly hectic lives.

Flahavan’s has over 50% market share of the total hot oats cereals market in Ireland which is worth €28 million and over 60% of the convenience segment of that market.

Flahavan’s Sales and Marketing Director John Noonan said the campaign recognises the active, healthy lifestyle of the Millenial generation, and will appeal to those who are not prepared to compromise on the most important meal of the day just because they have busy active lives.

“Our growing range of quick oats pots, sachets and drum means that there’s always time for a nutritious and convenient breakfast on the go.”