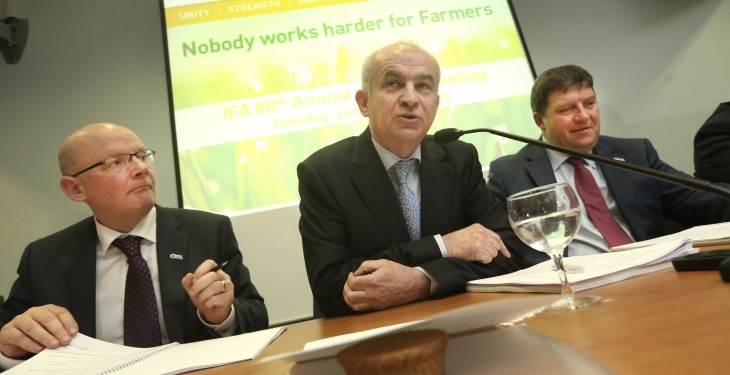 Ireland’s fledgling farming organisation, still yet to be officially named, has come under severe criticism from the IFA, which says a ‘fear factor’ is being used to drive it.

IFA President Eddie Downey said that while he wished the new farming organisation well, he “would hope they would allow the farmers to hear and get accurate information”.

Speaking at the IFA AGM in the Farm Centre today (Tuesday) he admitted that 2014 had been a particularly difficult year for farming, but the organisation would meet whatever challenge comes its way in 2015.

On GLAS, he said, that the IFA had negotiated to have no collective responsibility, no collective agreement, and that €5,000-7,000 of a payment and an individual plan for each individual commonage.

“They were the demands from farmers before I became President and that’s exactly what’s in the plan that’s currently there.

“People need to understand there is no collective responsibility. As regards the new organisation, I wish them well.

“There’s a fear factor after being driven into people out there…some people have gone off on singular agendas and they have brought people with them on misinformation. That needs to be re-communicated.”

IFA General Secretary Pat Smith said that when the facts come out, and the GLAS programme opens up, all the farmers who were told this (commonage) was a problem, when they see it’s not a problem they will see that the democratic structures of IFA, both at national Rural Development and Hill Committee was right all along and everything that could have been delivered has been delivered.

“If there are any problems when the GLAS programme, our record is to work the the Government to fix them. All we can do is stand by what we have achieved. The acid test will be how many commonage farmers will not get in and, in my opinion, none that want to get into the scheme will fail to get into it.”

Pat Smith said that one thing the IFA espouses is that through its democratic structures it has robust policy positions that do stand up to scrutiny and its only that way it can make progress with the Government.

He said, that IFA’s farming membership numbers are currently at record levels.