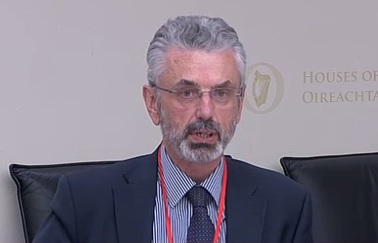 Aidan O'Driscoll Secretary General of the Department of Agriculture

The newly appointed Secretary General of the Department of Agriculture has conceded that the new Beef Data and Genomics Programme could not be described as a ‘simple scheme’.

Addressing the Oireachtas Committee on Agriculture this afternoon Aidan O’Driscoll, the Department of Agriculture’s top Civil Servant, said the new scheme will deliver €300m to farmers over the next six years.

But he noted that farmers will have to do a lot for it.

“I wouldn’t deny it for a moment: it is not a simple scheme,” he said.

On the contentious issue of the mandatory six year contract for the programme he said the regulation was not really quite what the Department had initially wanted.

“That came from discussions with the Commission, as a necessary part of the scheme.”

O’Driscoll said the Department can see why Brussels wanted its inclusion, using it to ensure that the scheme delivers on its objectives.

He also said that the scheme has been pitched as an agri environment scheme.

“This is where it has been placed within the EU framework. The norm, in this context  there is for schemes that extend over a number of years,” he said.

According to O’Driscoll the other elements of the scheme are all beneficial, in terms of delivering for the farmer.

“We saw an opportunity to address both issues simultaneously through a science-based, cutting edge scheme,” he said.