Edward Payne, Ballymoe, Castlerea, Co Roscommon is the 2014 winner of the Teagasc Student of the Year award.

The awards, sponsored by FBD Trust for the 30th successive year, were presented by the Minister for Agriculture, Food and the Marine, Simon Coveney TD in Dublin today, Tuesday, May 12, 2015.

Edward Payne completed a level 6 Specific Purpose Certificate in Farm Administration at the Agricultural College in Mountbellew in Co Galway. Edward jointly manages the family farm with his father.

Originally a suckler/sheep farm five years ago, the decision was made to convert to dairy farming and 140 dairy heifers were purchased.

Edward now manages the dairy enterprise which has expanded to 260 cows. He is convinced of the need to use genomic bulls and in 2014 the replacement heifer calves had an EBI of 202. He aims to maximize milk from grass with concentrates kept to just 0.5 tonne per cow per annum. He measures and budgets grass weekly and has an ongoing grass reseeding programme. 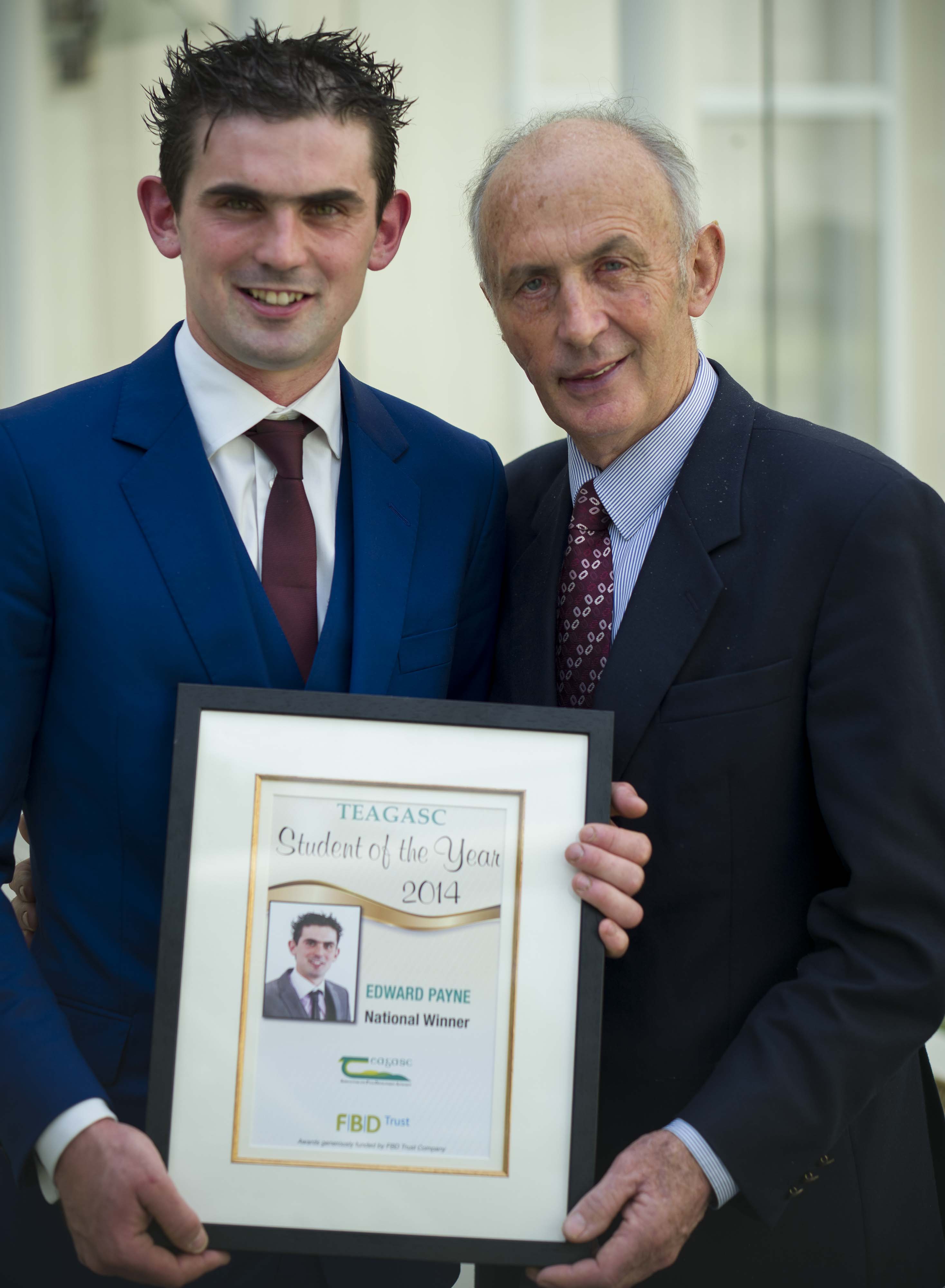 Edward Payne, Ballymoe, Castlerea, Co Roscommon, , was the 2014 winner of the FBD sponsored Teagasc Student of the Year award.

Edward’s goal is to establish another dairy farm in the next 5 years. He works very closely with his Teagasc Adviser, Seamus Nolan and is involved in 2 farmer discussion groups.

Speaking at the event, Minister Simon Coveney congratulated the 13 finalists who were chosen from almost 800 students who completed agricultural training programmes with Teagasc in 2014.

“I congratulate all of the finalists on reaching this stage of the competition. It is a great achievement and a proud day for you and your families.

“The influx of so many enthusiastic, well trained young people is a very positive development for the agricultural sector, which will benefit greatly from your skills, knowledge and enthusiasm in the years ahead.

He completed a level 6 Advanced Certificate in Agriculture (Dairy Farm Management), at the Teagasc Agricultural College in Kildalton. Michael now manages the home dairy herd of 110 cows as his father is in fulltime employment off the farm. Michael’s priority is to lift the current herd EBI without compromising fertility.

He is putting a big emphasis on his HerdPlus report and particularly the EBI sub –indices for fertility etc. He is applying knowledge gained at Kildalton to measure grass weekly and utilise the grass wedge for grass budgeting. He is also using the Teagasc eProfit Monitor and maintains a comprehensive set of performance records. He is involved in two discussion groups and utilises the local Teagasc advisory service.

James is not originally from a farm background being a 7th generation carpenter. He bought 16 acres of land and developed a passion for farming and grew the farming platform though leasing arrangements. James started a suckler herd in 2008.

He drew up a 5 year plan as part of his Green Cert course and converted to milk production as a new entrant. He is now milking 80 cows and would like to expand to 120. Herd EBI of replacement heifers is 160. James is involved in 2 discussion groups and works closely with the Teagasc education and advisory services.

In congratulating all of the finalists, Director of Teagasc, Professor Gerry BoyIe said that he was impressed with the high calibre of student receiving the awards.

“You have done extremely well and made full use of the opportunity that the education courses provide. It’s a proud day for you and your families. I would like to acknowledge the hard work and dedication of my colleagues in the Teagasc education service, in the Teagasc colleges, the private colleges and through the advisory service in the regional education centers. I would also like to thank FBD for their ongoing and continued support for the awards. FBD have been a constant for the last 30 years, supporting excellence in agricultural education.”

The students receiving awards have been chosen from those who have completed the level 6 agricultural training programmes with Teagasc in 2014. The other finalists were: