New Amazone plough to get first outing at LAMMA

With LAMMA 2014 now only two weeks away, Amazone recently announced it will be putting its new plough Cayron 200 on display.

It says a simple hydraulic system on the ploughs provides  a simple set-up of the front furrow width, the pulling angle and working width via three interlinked hydraulic rams.

The ploughs have a body-to-body clearance of 100cm, in combination with a beam height of 83cm and the smooth surface of the over-dimensioned main beam, which Amazone says guarantees maximum passage. Both models are equipped with a double-action shear bolt protection system against damage. 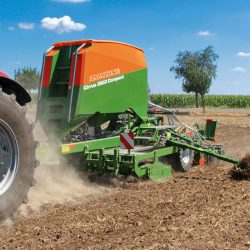 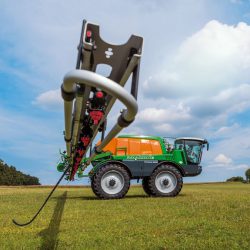 Also set to appear at the Amazone stand is the Pantera 4502 the all-new self-propelled sprayer.

Of note it says the drive unit is new from the ground up with three new chassis variations: Standard – High clear – Wide track (for all spraying applications from maize to potatoes through to cereals.) The hydrostatic drive system receives more torque, bigger wheels and disc braking giving it the ability, in theory, to travel at up to 50 km/h on the road where it is legally possible.

According to Amazone, the Cirrus range of trailed cultivator drills has always played a major part in the Amazone drill line up, the new Cirrus 03 series builds on those strong credentials and expands the range of operation. In two weeks time at LAMMA 2014 will be the new, highly manoeuvrable, shortened Cirrus 3003 Compact.

The company says the heart of the machine revolves literally around the new Matrix tyres which, with their radial construction and large diameter, make for an easy pull of the machine and also an excellent self-cleaning effect. Amazone says it’s RoTeC pro coulter gives an enhanced seed placement due to its new furrow former and seed pipe entry design.

Hopper sizes are increased now up to maximum of 4,000 litres on the 6m model with the optional grain & fertiliser system.

In regards to its plans for LAMMA, the company says: “Of course all this new stuff will sit alongside the rest of the range at Peterborough, such as the new ZA-TS, the UX 11200 and the EDX precision rape seeder amongst the many others.”