The value of Irish food and drink exports has approached €10bn for the first time in 2013, according to new figures released by Bord Bia today.

This represents an increase of nine per cent on the previous year and 40 per cent in the past four years with revenues almost €3bn higher than in 2009.

Export values for dairy product and ingredients exceeded €3bn for the first time and strong performances for meat and livestock (€3.3bn) and prepared foods (€1.65bn) all contributed to the positive outcome.

Minister for Agriculture, Food and the Marine, Simon Coveney, TD said: “Significant growth in 2013 has brought export values in the Irish food and drink sector to record levels. This leading performance in what was a challenging year for the industry, highlights the key role of agri-food, Ireland’s largest indigenous sector, in underpinning exports and economic activity.

“Export values of almost €10bn are really impressive, and demonstrate the clear opportunity and benefit of investing in a sector with proven resilience, a significant domestic economic footprint and strong ability to grow. With increasing demand from more affluent consumers in key world markets, there is little doubt that the €12bn export target set out in the industry-led strategy for the agri-sector Food Harvest 2020 is well in sight.”

Commenting on the figures, Aidan Cotter, Chief Executive, Bord Bia said: “Among the highlights of 2013 have been the double digit growth in dairy and beef export values, the strong recovery in sales to eurozone destinations, and the exceptional performance of the industry in China, now Ireland’s second largest dairy and third largest pork market. The industry is well positioned to exploit the relentless growth in the global demand for food, underpinned by its grass-based production systems and its ability to build its presence on both new and established markets”.

Bord Bia chairman, Michael Carey, said: “The significant export growth achieved by the Irish food and drink industry, in the face of an increasingly competitive environment for exporters confirms the dedication, ambition and resilience that is abundant in the sector. This impressive growth in exports by our largest indigenous industry reflects its persistent focus on innovation and differentiation as it seeks, successfully, to boost its position across key markets.”

Key Markets
The UK remains the largest export destination for Irish food and drink with 42% of exports worth an estimated €4.1bn reaching that market in 2013. Exports of food and drink to other EU markets increased by 11% in 2013 reaching €3.2bn with the key markets of Germany, France and the Netherlands all recording double digit growth. Strong exports to Asia, and to a lesser extent Russia, contributed positively toward an increase of six per cent in the value of trade to international markets, which exceeded €2.6bn in the period.

Exports to China grew by over 40 per cent, with values trebling over the last three years to reach €390m in 2013. It is now Ireland’s sixth largest market overall, driven in particular by strong dairy and pork exports. Seafood and beverage exports are also growing solidly albeit from a lower base, while eventual access to the beef market will act to further broaden the industry’s presence in the world’s fastest growing market. The inclusion of hide exports from the beef industry would bring the market’s value overall for the sector to €432m.

Prospects for 2014
The market environment for Irish food and drink remains positive for the year ahead, boosted by the strong growth recorded in 2013. A further rise in output is expected across key sectors and ongoing strong demand is anticipated in emerging economies. Much will depend on developments in more established markets and consumer sentiment will remain a critical driver.

Industry Sentiment
A Bord Bia industry survey carried out among Irish food and drink manufacturers has revealed that exporters remain positive about prospects for their business. In total more than 8 out of 10 reported higher or similar turnover in the last 12 months. Innovation remains important for many food and drink companies with 91 per cent of exporters reporting that they had introduced new products in the last three years. Looking ahead to 2014, some 75 per cent of exporters expect their export sales to grow.

Key Bord Bia Initiatives for 2014
In 2014, Bord Bia will continue to promote Ireland’s sustainable food and drink industry through its participation in some 15 trade exhibitions which will attract in excess of 800,000 business executives in Europe, Russia, the Middle East and Asia.

In February, Bord Bia will participate at Gulfood, the world’s biggest annual food and hospitality show taking place in Dubai. The Ireland stand, which will include dairy, meat and consumer food companies, will be a significant and timely representation of the Irish industry following its recent Trade Mission to the Middle East and the opening of Bord Bia’s newest office in Dubai. Gulfood is expected to attract more than 77,000 food buyers from around the world.

This year will also see the roll out of Bord Bia’s Sustainable Dairy Assurance Scheme which has been designed to provide a uniform mechanism of recording, monitoring and improving the sustainability of Irish dairying at farm level – the first national dairy scheme of its type anywhere in the world.

The roll out of the scheme coincides with Bord Bia’s plans to invest almost €3.5m during the year in a new targeted marketing campaign, under the ‘Origin Green’ banner to promote Ireland as a source of world-class sustainably produced food and drink. The ‘Origin Green’ sustainability programme now encompasses 37,000 farms and more than 290 companies, accounting for some 85 per cent of Ireland’s food and drink exports.

Additionally, starting this month, ten ‘Origin Green’ ambassadors will begin their placements with major international food businesses around the world, spreading the vision and the message of ‘Origin Green’. This follows a programme of induction at the Smurfit Graduate School of Business and on farms and factories in late 2013. 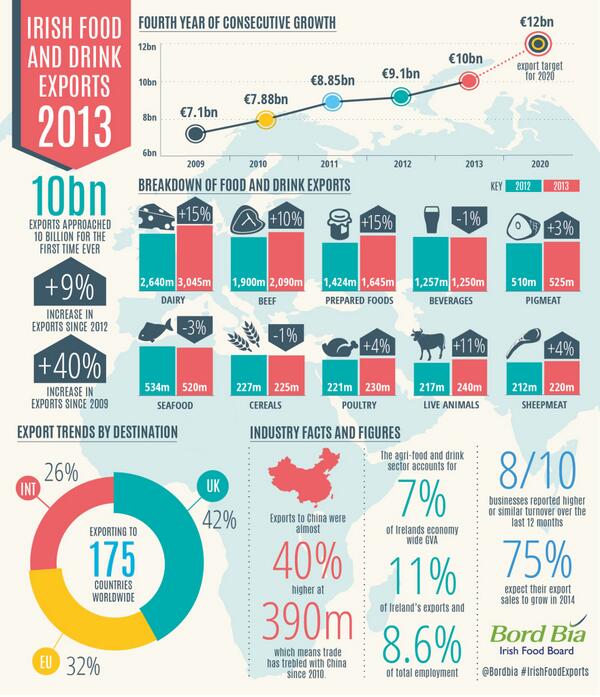 Call on DAFM to engage with farmers on Nitrates Action Plan