Anthony Flanagan, an agricultural contractor, lost half of his right leg in a farm accident when he went into the holding tank of a combine to clear a blockage of grain.

“It was the last day of the combining season and Anthony went off to do a small job around lunchtime,” Martin Hokins another contractor working with Anthony said.

Speaking in a video to mark the Farm safety Fortnight, Anthony said he was cutting three or four acres of corn and rain was promised at the time. He was finishing up and it did start raining and the grain got stuck inside of it.

“For me to clear it out I had to move and get into [the holding tank] to do that. I got into the tank and stood on the guard and reached in to shove it, and I was getting it in grand but I lost my balance then and that’s when my toe went into it.

I was trying to pull and pull but the speed of it; the machine was flat out. The speed of the auger and its shape too, it’s constantly grabbing you, so I couldn’t get out of it.

“My toes were gone in a matter of seconds. There was no point roaring because if people were walking they wouldn’t even hear me because of the roar of the machine. I found myself getting weaker and I said to myself if I don’t get out I’d be put out through it,” Anthony explains in the video. 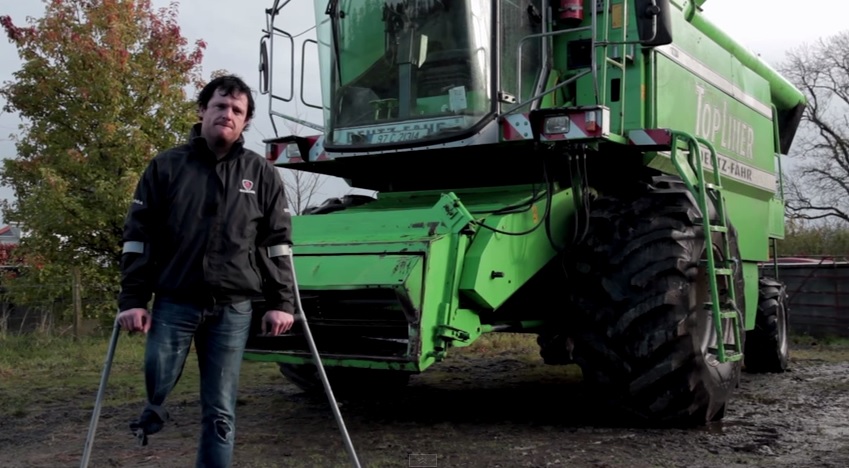 He says he got back up into the hole of the bin and he got his elbows up on the bin to jack himself up. One of his legs was away from the blockage, but the other was caught in it.

“It just tore then and I left it in it. I always think I rescued myself but the man that worked with me he found me first then he rang the man I was working for, Martin Hopkins, and he just came then and sure he had never seen anything like that before,” Anthony said.

Martin Hopkins said the farm accident was like something you’d see in a bad movie, you wouldn’t be able to look at it that Anthony was just lying down flat on the roof.

“I just glanced down and seen bits of his leg…such a horrific sight. I was sure he was going to die to be honest, he was very, very bad. Thinking about it or talking about it, it’s hard,” Martin said.

Anthony said that the doctor came from Eyrecourt and she put a drip on him and an hour went by, it was six o’clock when the fire brigade and ambulance came.

“Everyone is working on these machines, young lads and all, and they don’t get a proper run-down on safety. When they’re driving these big machines they think they’re untouchable. If you’re 17 or 18 years of age and you’re told to move that combine sure they’re gods gift, they’re brilliant, nothing would hurt them.

“It’s over before they know what happened,” Anthony says.

Martin said that the accident has made him more concious again. “I shiver now when I see anyone doing anything wrong. When you get out [of any machinery] turn it off, when you’re in the cab it’s ok but it’s when you’re on the ground [you need to be careful],” he said.

“Just think twice about what you’re going to do and not just leap in with your feet. I thought that it would not happen to be, I was going into these things a hundred times a day but it did happen to me.

“You just have to turn them off, respect the machine. Life isn’t bad, but it could be a whole lot better, if I had just thought at the time before I hopped into the combine,” Anthony said.