There is more rainfall forecast for parts of the country tomorrow (Thursday, August 27) as Met Éireann has issued a Status Yellow weather warning.

The Status Yellow rainfall warning will take effect at 1:00am tomorrow and will remain in place until 1:00am Friday, August 28.

Intense and potentially thundery downpours are expected on Wednesday night, Thursday and Thursday night which may lead to localised flooding.

“Given recent heavy rainfall this will further elevate river levels and may result in river flooding also.”

Earlier this week, thousands of homes, farms and businesses were left without power in the aftermath of Storm Francis.

Power outages affecting more than 13,000 customers across the country as a result of faults and many rivers burst their banks.

The rain over the past week has forced many farmers to house their cows for a period of time, in what has been a drastic turn in weather events.

Up until mid-August, weather conditions for the most part were quite good, with exceptional growth rates being recorded on farms.

However, the last week or so has seen a large amount of rain descend across the country, which has led to grazing conditions becoming very tricky on farms, with some farmers forced to house their stock for a period of time. 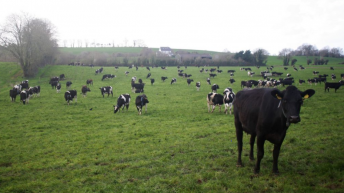