Milk production climbs by 3.9% on Irish farms in March

Milk production climbed by 3.9% on dairy farms in the Republic of Ireland in March, compared to the same month last year, the latest figures from the Central Statistics Office (CSO) show. 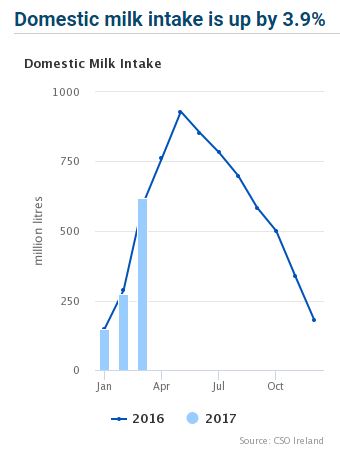 Milk production on Irish farms during the first three months of 2017 also reported an increase of 1.1%, compared to the same period in the previous year.

Meanwhile, a recent report from Teagasc has indicated that Ireland is still one of the lowest cash cost producers of milk internationally.

A detailed report and analysis of trends in the main sectors in Irish agriculture was published by Teagasc, as part of an international workshop on measuring international competitiveness and efficiency in agriculture.

The analysis has reaffirmed the competitive advantage associated with the Irish dairy farming system in particular, according to the report.

In the past, cash costs in Ireland were one of the lowest amongst the key EU dairy-producing regions, at €2.7/kg of milk solids. This was substantially lower than countries such as the UK, France, the Netherlands, Germany and Denmark, Teagasc Economist Dr. Fiona Thorne said.

“Our latest research shows that, based on a total cost competitiveness index, we are finally beginning to see our total economic costs reduce in an international context – due to increases in scale,” she said.