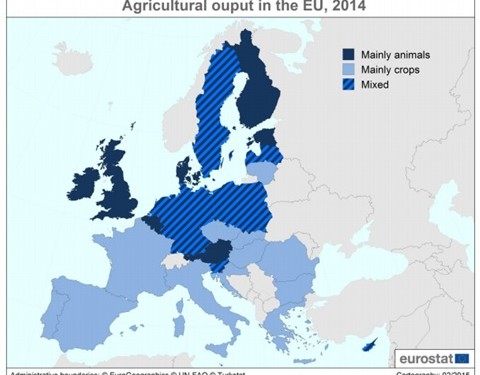 Meat and dairy accounts for 43% of agricultural output in the EU but 70% of Ireland’s.

According to the European Union’s (EU) latest statistical book on agriculture, forestry and fishery, which contains facts and figures on agricultural production the EU, meat and dairy production accounted for 43% of the total agricultural output of the EU.

The figures also show that Ireland has the highest concentration of meat and dairy production in the EU.

Denmark (63%) and Finland (60%) are the next two highest beef and milk producing countries in Europe.

Some 25% of Ireland’s agricultural output is in crop production.

This figure is then further broken down to cereal and vegetable and horticultural production.

Romania had the highest concentration of crop production in the EU.

Greece (69%) and Bulgaria (65%) are the other two highest crop producing countries.

France and Germany produce nearly 40% of cereals in Europe, with France being the largest producer of cereals with 22% of total European production.

The total amount of agricultural output in the EU is €392.2 billion

€7.3 billion of the total EU figure is generated by Ireland’s agricultural growers and producers.

France produces over €70 billion of the EU’s agricultural output.

Germany (€51 billion) and Italy (€48 billion) are the next two highest producing countries.