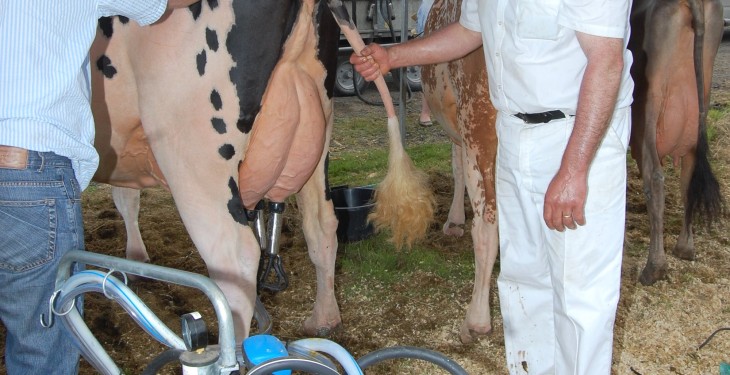 The McLean family from Bushmills in Co. Antrim rounded off their most successful show year ever with an almost complete clean sweep of the Black & White classes at this week’s Fermanagh Show.

Throw in the fact that they also won the Supreme Dairy Championship at the Enniskillen venue plus a host of other Inter Breed titles and it’s hard to believe that they will have enough wall and cabinet space to show off the multitude of rosettes – not forgetting trophies – which they have amassed over the past four months.

“It really has been a tremendous year for us,” Iain Mclean told Agriland.

“In total we have won eleven breed and inter breed titles this year. It really can’t get any better than this.” What has made 2014 even more satisfying for the McLeans is the fact that they have had success with both their Holstein and Coloured Breed animals. They won yesterday’s Dairy Inter-Breed title in Enniskillen with Priestland 4951 Shot Bedazzle. Born in January 2010, she calved for the second time back in February of this year. A daughter of the renowned dairy sire Picston Shottle, she is an excellent example of her breed.

“Bedazzle has more than held her own at most of the show venues this summer. Fermanagh Show is particularly competitive as it is hosts a number of important Inter breed and All Ireland Championship classes.

“We have had a lot of interest shown in the cow by breeding companies in Great Britain. The aim would be to have her contract mated. A bull calf produced in this way would, potentially, be a very valuable sire of the future.”