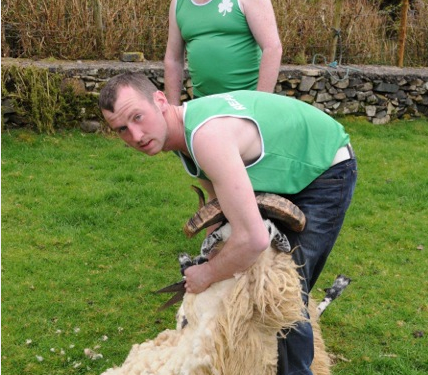 The two-man team to represent Ireland in the Golden Shears World Blade Shearing Championship, to be held in Gorey in May, will be champion shearers Peter Heraty and Seamus Joyce from Co. Mayo, the Irish Sheep Shearers Association has confirmed.

Seamus Joyce from Kilbride, Finny, is married with three children and farms 700 sheep. He won the Irish Blade Shearing Championship in Millstreet in 2013 and also won the title in Galway in 2005.

Peter Heraty is a 24-year-old farmer from Owenwee, Westport, who farms 300 sheep on his holding near Croagh Patrick. He has competed for Ireland in the last two World Championships, in Wales in 2010 and in New Zealand in 2012.

The World Blade Shearing Championship, sponsored by Novartis Animal Health through their blowfly products CLiK and CLiKZiN, is one of the centrepieces of the World Shearing and Woolhandling Championships which take place on May 22-25.

The current world blade shearing champion, Zweliwile Hans from South Africa, who won the title two years ago in New Zealand, will be defending his title. Other countries sending blade shearing teams are Australia, New Zealand, Wales, Scotland, England, Germany, France, Slovenia, Sweden, the US and Isle of Man.

Over 600 of the world’s top shearers from 30 countries will be competing for a series of individual and team titles in Blade Shearing, Machine Shearing and Wool Handling during the five days of the championships.

Chairman of the Organising Committee, George Graham, explained that blade shearing, rather than machine shearing, is practised in countries around the world where the shearer prefers skill to speed to do the job.

“We’re delighted that CLiK is supporting blade shearing which is such a delicate and important skill. With blade shearing, some wool is left on the animal and this is ideal for cold climates, like Ireland, where sheep need some protection from the elements, “ he sai