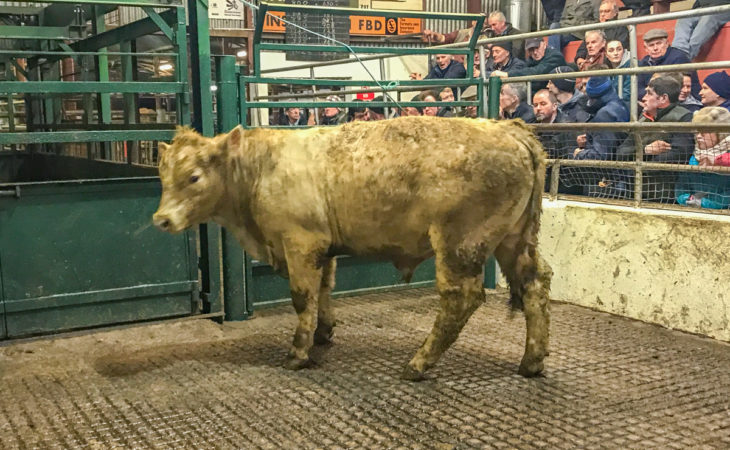 The favourable grass growing conditions have boosted grass supplies on farms across the country which, in turn, has seen farmers busy sourcing cattle for grass in the past week.

Speaking to mart managers, most have described the trade as firm, with a lot of farmer activity sourcing lighter stock for grass.

But, heavier steers and heifers are still proving popular which is helped by an improvement in prices achieved at the factory gate.

In addition, exporters and farmers have continued their battle for weanlings which is keeping prices on the healthy side.

David Quinn, the mart manager, said the trade remained strong for all classes, with the calf trade “very strong” with plenty of farmer customers and exporters.

100 suckler cows with calves at foot met an “excellent demand” and made prices of 1,920/unit for the better-quality types.

In addition, weanling bulls were reported to sell in the region of €420-760 along with the weight.

Some 850 lots were presented for sale on Tuesday last, May 7, at Ennis Mart, Co. Clare, which included a larger than expected entry of calves with 220 on offer; these lots were reported to meet a good trade overall.

Moving to the cow ring, cow and calf pairings made €2,000/unit, with a few lots breaking this mark. In addition, the trade for weanling heifers and bulls was strong also.

On Thursday last, May 2, Kilkenny Mart hosted a sale of 950 cattle which was smaller in size to the previous week’s sale.

George Candler – the mart’s auctioneer – noted that there was more positivity about the trade – especially for quality continentals.

He said: “Plain Friesian and Aberdeen Angus – under 360kg – with dairy influence were the most difficult to sell.

“Cull cows and beef and forward store types were in demand,” he added.