According to CSO figures, released today some 144,600 cattle were slaughtered last month this compares to 117,000 in the corresponding month in 2013.

According to latest figures from the Department of Agriculture cattle supplies at export meat plants for the week ending April 19 stood at just over 31,700 head, which was down around 500 head on the previous week.

Supply was over 3,500 head or 13% higher than the equivalent week in 2013. Cumulative supplies for the year to-date are running at around 58,000 head higher. 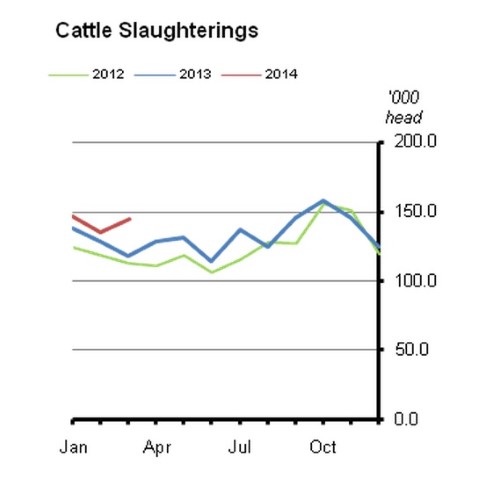 Supplies for the week ending 19th of April stood at around 47,700 head which is almost identical to the previous week.

Latest figures show that cumulative supplies of pigs are up around 6,900 head or just under 1% on the same period in 2013 standing at around 894,700 head.

For the week ending April 19, total pig supplies at export meat plants stood at around 59,400 head up around 1,700 head on the corresponding period last year.