Managing cows and fertility this spring in suckler herds

Managing cows and fertility this spring in suckler herds

With calving on a lot of suckler farmers’ minds in the coming weeks, it is important not to forget the busy breeding season that will follow.

Taking the correct steps now can have a positive impact on your herd’s fertility and cows return to heat post-calving.

Aidan Murray, who is a beef specialist with Teagasc, has provided some simple advice that suckler farmers should keep in mind when managing their cows in a spring-calving system over the next few weeks.

Keeping an eye on body condition

In terms of the body condition score (BCS) of the animal, the condition of the cow will impact her ability to calve down.

Having a cow too thin will have a negative impact as she will struggle to calve, rear the calf and then face a difficult challenge to get back in-calf.

On the other hand, if a cow is too fat she may also have issues at calving, while also be being predisposed to metabolic disorders.

If cows are going to have a prolonged period between calving to turnout, farmers should aim to have them at a condition pre-calving BCS of 3.0 to aid ease of calving.

Cows that are going to be turned out straight away will be able to get away with a BCS of 2.75 at calving.

The first-time calvers are going to be the future of your herd so taking good care of them this spring should be one of your priorities.

Aidan highlighted that irrespective of age at first calving, the Irish Cattle Breeding Federation (ICBF) work has shown that heifers will need more assistance at calving – typically just over half will need some degree of intervention.

If turn out is delayed once the heifers are calved down, supplementation of meal alongside good silage may be required.

This supplementation post-calving has shown to reduce the level of weight loss, improve feed intake and increase milk yield in heifers – which in turn will lead their calf having an improved average daily live weight gains.

Advertisement
In Teagasc Grange, heifers are supplemented close to 1.5kg of concentrates, alongside good quality silage ad-lib until turn out.

Keep an eye on these first-time calvers if they are mixed with mature cows in a pen. If there is a reduced feeding space, with bullying and intimidation, these heifers can lose condition quickly.

Ideally, if you have a large number of first-time calvers you should pen them together. 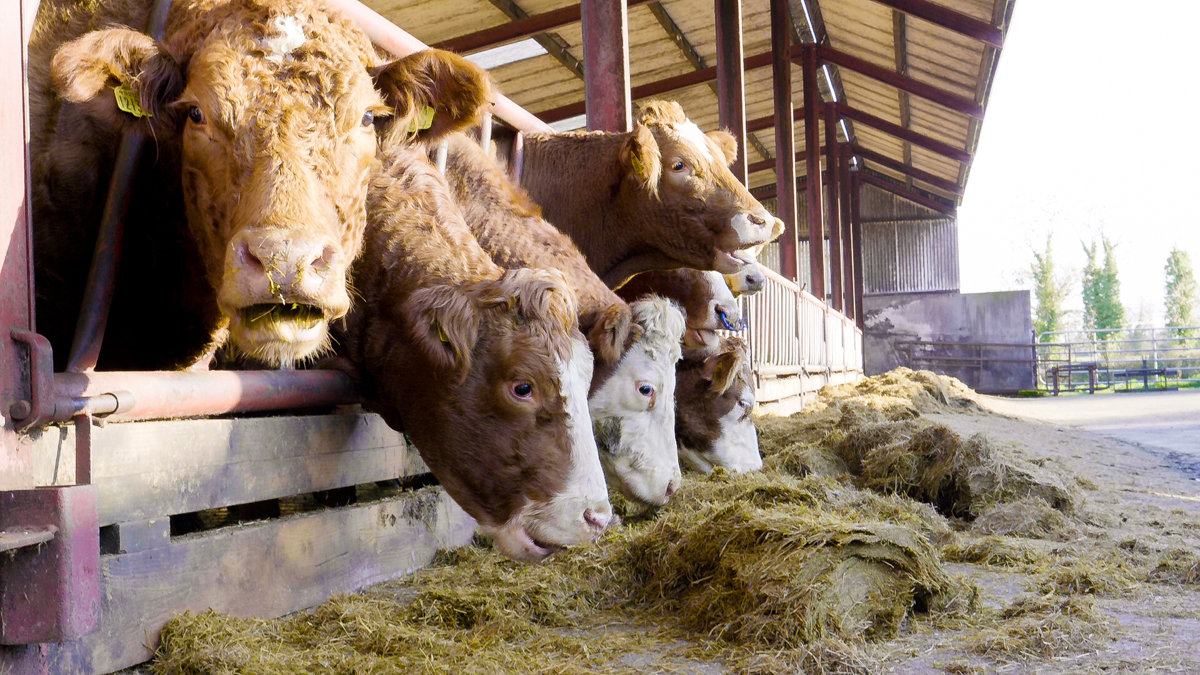 ‘You cannot starve calving difficulty out of cows’

According to research, ‘you cannot starve calving difficulty out of cows and heifers’.

Aidan added to this by discussing how there is a temptation to restrict feed to cows in the lead up to calving. This is in an effort to reduce calf birth weight and calving difficulty.

The table below illustrates the outcomes of feeding cows and heifers varying levels of grass silage, straw plus concentrates pre-calving. 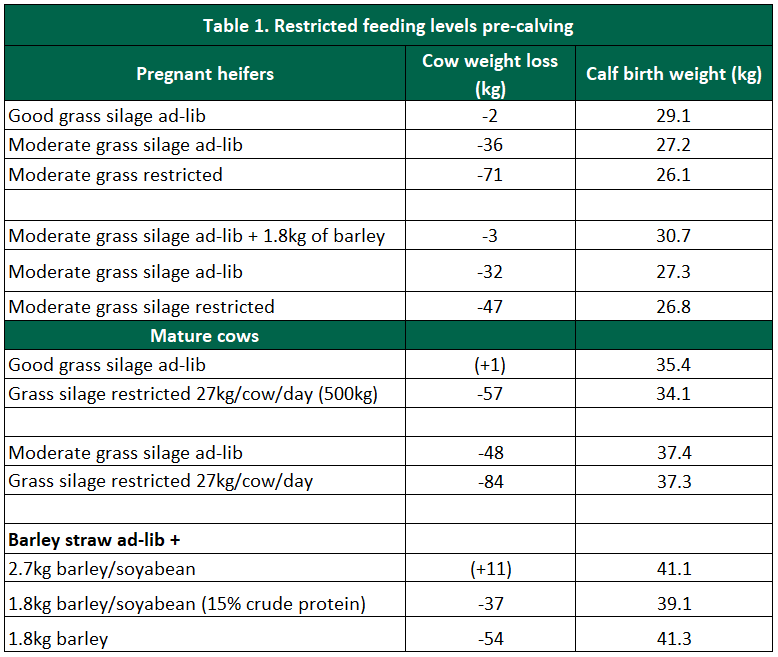 If a farmer goes too far with restricting feed pre-calving, it could lead to other problems such as severe weight loss – which will impact re-breeding again later on in the spring.

The efforts should be focused on having the BCS of the cow correct in the four-to-six-week period pre-calving. During this time, the cows should also be supplemented with good pre-calving minerals to improve calf vigor and viability.

Organising a pre-breeding scan of cows that had twins, retained afterbirth or had a difficult calving could pick up on potential problems such as infections which can then be treated.

Cows will often be grouped pre-breeding anyway if you are vaccinating for the likes of leptospirosis, bovine viral diarrhea (BVD), etc.

If running a stock bull, make sure to take care of him as well this spring. Ensure they get their vaccines pre-breeding and if they need any treatment with their feet, get it done now.

Aidan concluded his advice on a good point which stated: “What happens in the next few months could well determine the calf crop of 2022.”

Calls for DAERA to introduce further measures to eradicate BVD

ABP announces appointment of non-executive director to board

Calls for DAERA to introduce further measures to eradicate BVD

ABP announces appointment of non-executive director to board