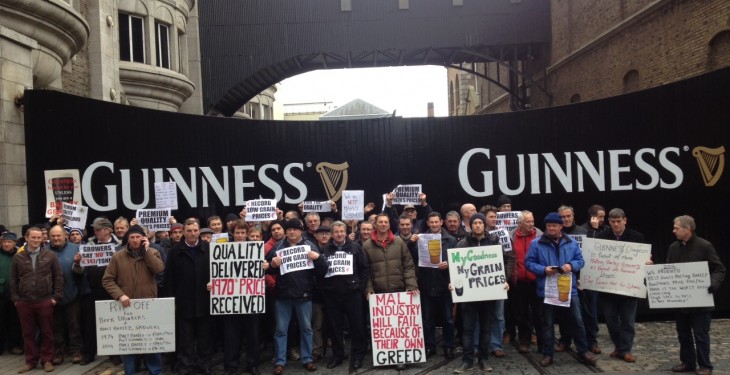 Malting barley growers outside the Guinness storehouse in 2017

Malting barley growers protested today outside Guinness in Dublin, saying they are ‘frustrated’ with how they are being dealt with over prices and specifications.

A spokesperson for the group said they were feeling “pressurised” by Guinness over changes to specifications to grain this year. “This is a last resort for us today, but we have to get the message to the people that we are supplying.

“The specification changes meant growers had no confidence in forward selling. Further, with contracts not being sent out until the end of May, farmers were in a difficult position. Seed was out in January, so contracts and changes should be presented to farmers before they sow a crop, he said.

“Over 100 growers attended today and we handed in a letter outlining the issues for the growers, including the changes we have had to specification. We were there today out of frustration and not being negotiated with properly and we feel pressurised by Diageo.

“We outlined in the letter that specification changes are very difficult to deal with, including that we are using older seeds varieties that have limited yields.” He said a representative from Diageo met with the growers briefly and took the letter from them.”

According to the growers, the IFA met with Diageo last week, but did not relay to tillage farmers the outcome of the meeting. The growers said they were also in the dark about further meetings between the IFA and Diageo.

However, Mark Browne, IFA Malting Barley Committee Chairman and Chairman of the Boormalt Steering Group (which comprises growers and Boormalt representatives), said talks with Diageo were ongoing and growers had been kept informed, through text and letters. He also said that there is meeting scheduled for next Monday in Carlow.

A spokesperson for Diageo said the protest at St. James’s Gate by the growers is completely unwarranted and unnecessary.

“Diageo Ireland has a contract to purchase malt from a malt supplier (Boortmalt) and not directly from farmers. Hence all price negotiations regarding malt barley are between Boortmalt and the farmers and they should continue their dialogue as this is the appropriate forum for pricing issues. Diageo Ireland has always been supportive of Irish farmers and farming in Ireland and will continue to be so.”