Maize harvest kicking into gear – in a north-bound trajectory 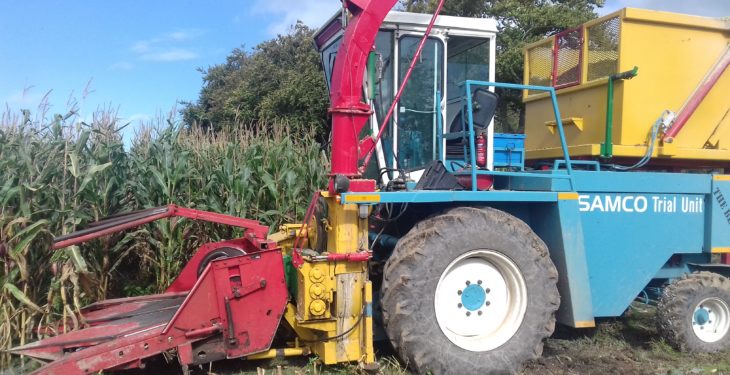 The outlook for maize is positive for the future; many of this year’s crops are now approaching maturity.

That was the overriding message at Shines Agri open day in Adare, Co. Limerick on Friday (September 29). To find out more, AgriLand spoke to some of those in attendance.

Peter Nevin, who works for Gil Fresh Produce, in Co. Armagh, travelled to Adare to see what improvements he could make to his maize crop. The crop is grown specifically for use in an anaerobic digester.

“I wanted to learn more about maize; what the varieties have to offer; how to assess maturity; and when to harvest,” he explained.

The maize grown by Gil Fresh Produce goes into an anaerobic digester, along with vegetable waste and some grass silage.

Maize is very successful in the anaerobic digester. It has a high gas potential. Tonne for tonne, compared to grass, we use less maize but it’s more expensive to grow.

Alan and Shane Ruttle are well-known agricultural contractors, who cut the maize on Shines’ farm.

“We cut the maize here for Samco each year. We cover west Limerick and a small bit of north Kerry. We hope to start cutting next week. Our acreage is up slightly on last year – but only slightly; it’s not massive.”

Shay Galvin was enjoying the open day. “I have no maize cut yet,” he noted. “It will be another couple of weeks before we cut our own. The crop looks fairly good. I’d say it will be an average year this year.

The Croom-based farmer has no plans to increase his acreage of the forage crop. “We’ll be sticking around the same acreage for the foreseeable future. A contractor cuts it for us.”

We might change variety next year or maybe put two different varieties in. The hybrids are the way to go because they have better yields and better growing capacities, so we’ll stick with them.

Gordon Shine of Shines Agri was very happy with how the day went. He said: “I think we had a very good crowd; we were blessed with the weather. I think everyone was very encouraged.

“There were a lot of things to see – the trial plots, the demonstration sites, the bag press; there were six or seven other stands here.

“One man actually described it as a ‘mini ploughing match’, so it was great to get positive feedback.”

Shines hope to cut their own maize next week. “Cutting is under way in the south of the country, so it will be creeping upwards like a frost.

“The midlands will get going next week and then into the northern half of the country.” 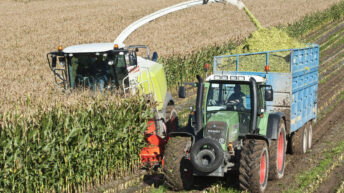 Maize harvest gets underway in the south