Maintaining what we’ve got to stop pollinator decline

Farmers in this country are already doing great work to promote pollinators on their farms according to a leading professor, who told AgriLand they should be rewarded for that and rewarded to improve measures, not penalised.

Pollinators are in decline and, according to a report by the European Court of Auditors released earlier this month, the EU’s biodiversity strategy to 2020 has been “largely ineffective” in preventing the decline of pollinators.

The report went on to describe how policies like the Common Agricultural Policy (CAP) do not include specific requirements for the protection of wild pollinators and how the Pollinators Initiative, which was launched in 2018, was found to have little effect on halting the decline of pollinators.

So what can be done?

Earlier this season, AgriLand spoke to Jane Stout, a professor at Trinity College Dublin (TCD), who is also the deputy-head of the All-Ireland Pollinator Plan.

She stated that diversity is the key to preventing further decline and also pointed out that farmers in this country are already doing some great work to prevent the decline of pollinators.

Causes of the decline

She firstly explained some of the causes of the decline in the bee population and while she admitted that a combination of factors have contributed to the decline, top of the list is the loss of habitats for pollinators, whether that be flowers for food or places to live.

“Food and places to live have declined, have been degraded or become homogenised through a range of activities including agricultural intensification, urbanisation and the way that we manage green spaces,” Jane explained.

While loss of habitat is one of the primary drivers of decline, there are many others including: pollution; poisoning through chemicals and pesticides; and pathogens and parasites.

Climate change is another major contributor. Jane explained that the gradual change in climate affects blooming periods and where species can live.

Extreme weather events, such as floods and droughts, also put pressure on habitats. All of these factors are contributing to a decline in pollinators which are essential for food production.

The All-Ireland Pollinator Plan has developed guidelines for people in a range of different sectors and it is hoped that giving sectoral specific instructions or guidance will help to improve habitats.

What can be done to reduce the decline?

“One of the first things is to protect what you’ve already got. I think that’s an important thing to say,” Jane explained.

“That’s the first step and after that you try and improve what you’ve got in terms of providing the things that bees are lacking in the environment – food and places to live.”

Reducing the use of chemicals and reducing the frequency of mowing in green areas are some examples of how to improve biodiversity.

“Everyone can do something and this is why the pollinator plan’s guidelines have been developed and tailored to specific sectors, because it’s very difficult for us all to know what we can do.”

Very importantly, Jane added that these guidelines are evidence based and have science behind them, but are very practical and doable.

Farmers need to be rewarded for what they’re doing already

Crop rotation is one way of creating diversity, but it’s important to be broad minded.

Jane commented: “It’s all about getting diversity back into the landscape. So, while the crops may be fairly homogeneous you can get that diversity in around the edges of the crops by managing the hedgerows in an appropriate way rather than cutting them all the way back.”

Jane went on to describe the good work being done on many farms and the benefits that diversity can bring about, like natural predators.

“I know some tillage farmers that are doing incredible things. They’re really embracing this and if you’ve got more diversity in the farmland then there are benefits, not just for bees and other pollinators, but for the natural enemies of crop pests. There are lots of other benefits that come along with biodiversity and promoting pollinators.” 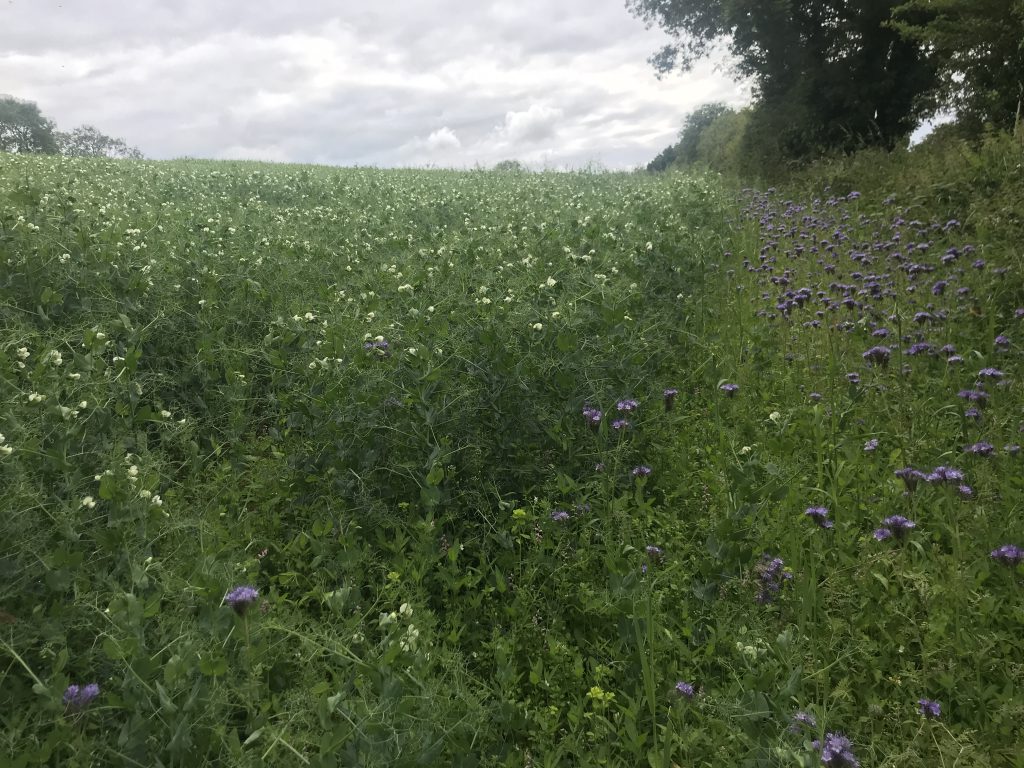 A pollinator strip planted alongside a crop of peas in Co. Cork this summer

What needs to be done in the new CAP?

As the new Green Deal approaches there are plenty of opportunities to implement measures that can benefit the environment and the farmer. Jane outlined some of the changes she would like to see.

“What I’d really like to see in the next CAP is a bit more focus on the quality of habitats, so not just creating habitats, but making sure those habitats are of good quality.

“I said before about maintaining what we’ve already got. At the moment farmers aren’t being rewarded for maintaining bio-diverse, wildlife-friendly parts of their farms.

“I understand that they are already working on very tight margins. They can’t be penalised and there’s no point rewarding them if it’s not something that’s beneficial.

These measures are supposed to be beneficial for the environment. If it’s not beneficial then it’s a waste of money.

Hedgerows are a great example of providing habitats and diversity.

“Hedgerows are fabulous in terms of biodiversity on Irish farmland. They’re wonderful. They support an enormous number of plants and animals and provide the aesthetics of the countryside.

“You look at those beautiful big flowering hedgerows in the spring with the blackthorn and the hawthorn. They’re really beautiful and they’re very inspiring to people, as well as providing habitat for wildlife, but unfortunately sometimes they’re falling out of the payment system.”

Jane stated that hedgerows may be removed for economic reasons, but if farmers were rewarded for looking after their hedgerows it could be positive. 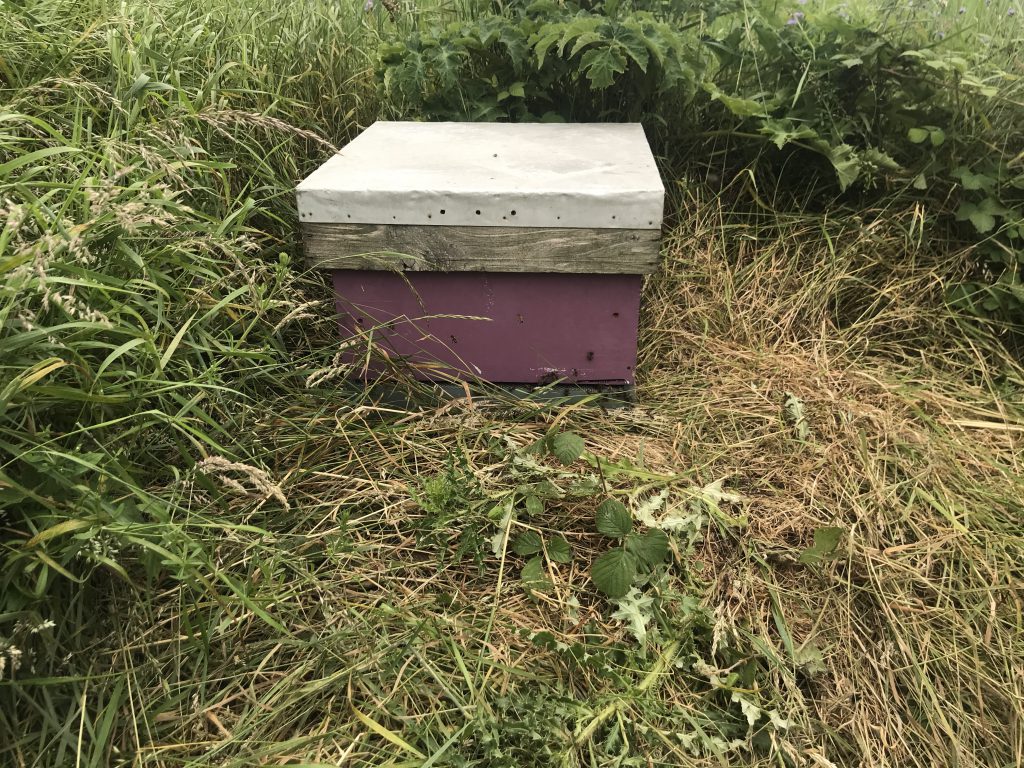 Promoting bees in a crop margin of a field of beans in Co. Cork this summer

Jane described the continuous use of pesticides as a treadmill where resistance builds up and natural enemies are killed.

Neonicotinoids for outdoor use were banned by the EU in 2018. Tillage farmers can no longer use a seed dressing that protected crops against aphids and barley yellow dwarf virus (BYDV).

Jane explained that we must now try and encourage natural predators such as parasitoid wasps, ladybirds and ground beetles.

I don’t want to preach to farmers, but I’d love to see a way that we could farm without using so may pesticides and that is a challenge.

“Applying a pesticide works, where as if you leave it to nature it can vary a lot year-to-year and season-to-season and so it’s a lot riskier.

That’s the theory of ecological intensification – that you will get this balance and I suppose the worry is that as we lose biodiversity and diversity of species you lose that ability to have the potential to regulate populations.

“When you’ve got diversity in a system it gives you resilience and it gives you fallback options in terms of providing these ecological functions,” Jane added.

ALL-IRELAND POLLINATOR PLAN BEES SAVE THE BEES
LOADING NEXT STORY