Macra’s vie for AIB club of the year 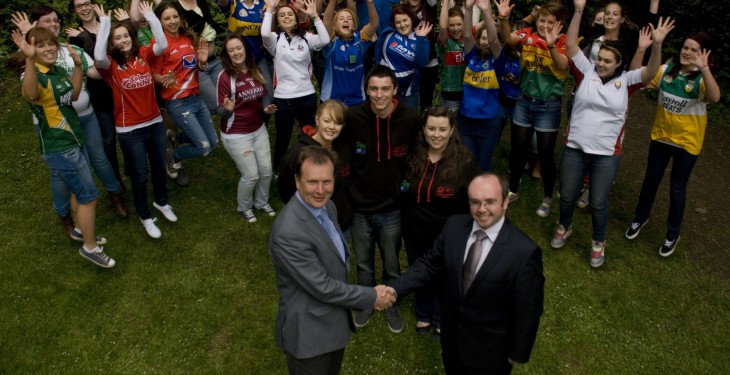 Thousands of rural young people in Macra clubs across the country strive to improve their community and their club through hard work and commitment. With the kind support of AIB, Macra’s Club of the Year and Best New Member competitions are an opportunity to acknowledge this effort. The competition is held in high regard by clubs and the communities they are active in.

The AIB Club of the Year and Best New Member competitions are now open for entry and application forms are available on macra.ie. The competition was launched this afternoon by Patrick Butterly from sponsors, AIB, and Macra na Feirme National President, Kieran O’Dowd, with the help of current AIB Club of the Year title holders, Johnstown/Coolgreaney Macra, from Wicklow and the Blue Jean Country Queen finalists at Macra’s Blue Jean Country Queen festival in Athboy, Co Meath.

Six clubs are selected to go forward to the national final, which will take place at this year’s Annual Conference in Carlow over the October bank holiday weekend.

Macra National President Kieran O’Dowd said: “We are delighted to be able to recognise the work that Macra clubs do throughout the country. A huge amount of effort and commitment means that Macra is an organisation that plays a significant role in Irish communities. A special word of thanks is due to AIB for its continued support of rural young people through this competition.”

Speaking at the launch,  AIB Agri Advisor Patrick Butterly said: “The Club of the Year competition highlights the key role and contribution individual Macra clubs and their members bring to both rural and urban communities throughout the country. AIB are delighted to continue our long association with Macra na Feirme by providing the platform for Macra clubs to showcase the considerable range of activities they undertake throughout the year. “

The ‘AIB Best New Member’ Award will also be presented as part of the Club of the Year competition to one individual Macra member who is deemed by his/her club to have made a significant contribution to the development of the club during their first year of membership.

Application forms have been distributed to clubs who can submit their applications directly to Macra national office. To request a form please call 01 426 8900 or go to the download section of macra.ie

Pictured at the launch were, from left: Patrick Butterly, AIB Agri Advisor (sponsor) and Kieran O’Dowd, Macra National President, with members of the 2012 competition winners, Johnstown/Coolgreany Macra,  Katriona Kinsella, Patrick Kavanagh and Orlaith Mythen as all the Blue Jean Country Queens congratulate them on their success. Courtesy Macra na Feirme