Low soil Potassium levels will have a negative impact on the yields produced by barley crops, Teagasc’s Mark Plunkett has said.

The Soil and Plant Nutrition Specialist spoke at the Teagasc National Soil Fertility Conference on Wednesday, where he discussed the importance of Potassium for barley production.

Plunkett told the 400 strong crowd in attendance that barley grown on Index 1 soil will have a 2.3t/ha lower yield than a crop grown on an Index 2 soil, when no artificial Potassium is applied.

Spring barley yields are dependent on the first six weeks after establishment, any lack of nutrients will have a negative effect on yields

“It shows the importance of soil fertility,” he said. 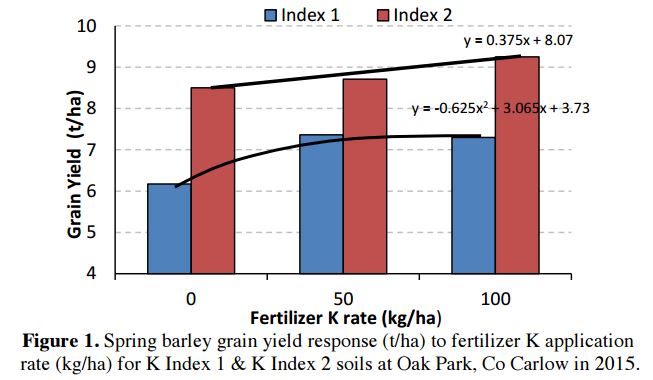 Plunkett also discussed the yields when 50kg/ha and 100 kg/ha of Potassium were applied to Index 1 soils.

Looking at the Index 2 soil, there was a grain yield response of 0.75t/ha up to a 100kg/ha Potassium applications.

This indicates that the higher soil Potassium levels confer grain yield potential which cannot be recovered with in-season fertiliser applications, he said.

The Teagasc Specialist also discussed the relationship between Potassium and disease prevalence in winter and spring barley crops.

Potassium plays many key roles in the plant and aides plant stress tolerance mechanisms, he said, while it is also beneficial in terms of increased straw strength and for the efficient use of Nitrogen.

In crops that receive zero Potassium applications, he said, there were high levels of powdery mildew present from flag leaf to ear emergence compared to plots where Potassium was applied.

“This demonstrates the role of Potassium in protecting the plant from disease infection such as powdery mildew,” he said.

He also added that as the rate of Potassium fertiliser application increases the level of brackling witnessed in the crop decreased for each incremental rise in Potassium rate up to 160kg/ha.