Only 1% of Irish farms grow vegetables which is the lowest percentage across all other Member States in the EU, the latest Eurostat figures show.

The figures also show that only 0.2% of the EU’s vegetables and 0.1% of its apples are grown in Ireland, while the Irish production of tomatoes doesn’t even register on an EU-wide scale because it is so low.

It was revealed in the most recent farm structure survey that on average fresh vegetables are grown on 12.4 % of EU farms.

In the EU, Eurostat figures show, land dedicated to growing vegetables amounted to close to 2% of all available arable land.

But this figure did vary widely with some countries such as Malta (22.3%) and the Netherlands (7.7%) reporting a proportion much higher than the EU average.

Meanwhile, fresh vegetables were grown on almost 2.2m hectares in the EU in 2015, nearly half of which were in Italy, Spain and Poland, according to the Eurostat figures. 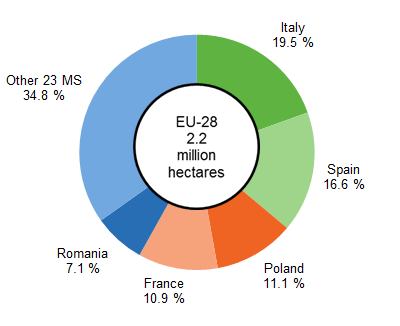 Close to half of all fresh vegetable production in the EU took place across three Member States; Italy, Spain and Poland.

The vegetable which was grown in the largest area was the tomato, taking up a total of 11.7% of the total vegetable area. This was grown mainly in Italy, 41.9%,  and Spain, 22.8%, the figures show.

Out of the total area available to vegetable production, 85,000ha was used to organically produce fresh vegetables, according to Eurostat.

The figures show that organic vegetable farming was practised on 2.5 % of EU farms, with 12.6 % of all certified organic farms growing organic fresh vegetables.

With regards to fruit production, it was revealed that less than 1% of Irish farms had orchards compared to an EU average of 14.6%.

Across the EU apples were the most common fruit grown, with Poland with Poland producing the largest share, 25%, followed by Italy, France and Germany.

Youth of today aren't eating their fruit and veg!