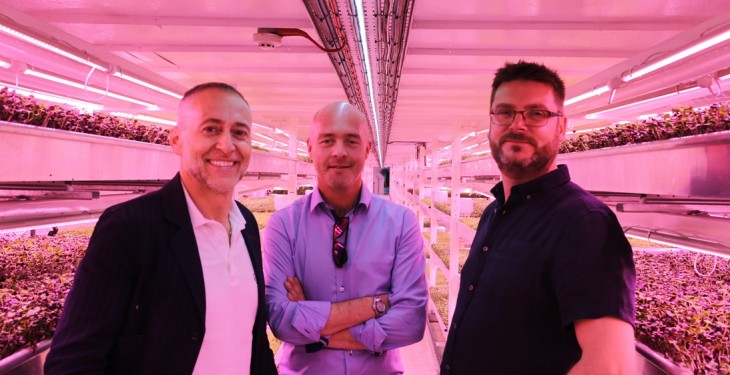 The venture, which is the brainchild of entrepreneurs Richard Ballard and Steven Dring – in partnership with acclaimed chef Michel Roux Jnr, has been developed with the aid of a crowd funding initiative. This has valued the business at just over £2m.

The first phase of the farm extends to 600m2. It includes a sophisticated lighting and irrigation system, which will supply a nutrient rich solution to the micro vegetables that will be grown. Phase one crops include pea shoots, several varieties of radish, mustard, coriander, Red Amaranth, celery, parsley and rocket.

“We’re delighted that our first shoots will be delivered to the surface in the next few weeks,” said Ballard.

“After 18 months of research, development, growing trials – and tribulations – we’re about to start supplying into the market.”

Phase one has represented more than £750,000 investment. The property being utilised for the project has been taken on a long term lease from Transport for London. It extends to almost four acres.

Michel Roux Jr said that he was looking forward to creating my first dish using produce from the world’s first underground urban farm.

“It’s great to be involved in this ambitious project, for which we have equally ambitious growth plans.  Above all, it’s fantastic to be able to source produce that is so fresh in the heart of Britain’s largest city.”

Crops are grown in a sealed clean-room environment with a bespoke ventilation system, advanced lighting and a sophisticated irrigation system that enable the farm to produce crops at very low energy.

The farm’s mission is to deliver fresh produce with zero effect on the environment and all energy is sourced from green suppliers.