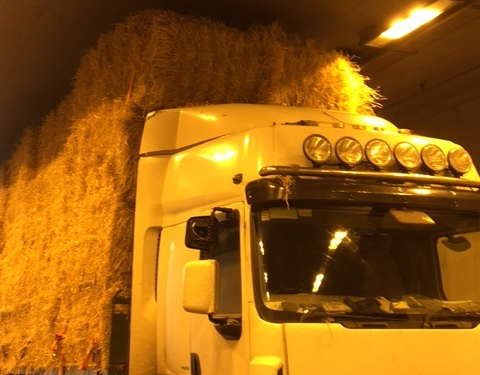 The northbound lane of the Limerick Tunnel remains closed today after a haulier carrying bales became stuck at the entrance to the tunnel yesterday (September 11) morning.

He said that the truck was nearly 5m high and that the maximum height in the tunnel is 4.65m.

The truck driver ignored “every single one” of the automatic warning systems that are in place in before the tunnel, which warn drivers of the height limit, he said.

He then drove through the barrier at the entrance to the tunnel and there’s been quite a substantial amount of damage to signs, lights and electronic systems, according to Cahill.

There is a contra-flow traffic system in place now at the tunnel to deal with the traffic following the incident.

Also Read: Here’s the official rules for transporting bales on the road

Earlier this month, Irish Rail appealed to truck drivers to “wise up” to the height of their vehicles as bridge strikes begin to rise again.

It said that the increase in bridge strikes may be explained by an increase in construction traffic, but it is still not acceptable that truck drivers in many instances do not know the height of the vehicle they are driving.